The Hiding Karma My Life Interview The Hiding Karma My Life Interview

Melbourne indie electro-pop act The Hiding have today announced their new single, Karma My Life alongside an artistic, emotive video clip and several show dates kicking off in Bendigo at Rifle Brigade Hotel on April 29, moving through to Mynt Lounge (Werribee) on May 6 and finishing up at Revolver (Melb) on May 21.

The band's folk inspired percussive guitar sound takes influence from when the band were absorbing the many acoustic performances in Central Park whilst living in New York. With a memorable hook and a happy, roadtripping vibe, the single touts a supremely positive message, a recurring theme that flows through the band's songwriting. 'Life can throw so many speed bumps and The Hiding has experienced its fair share of these," explains lyricist and guitarist, Anthony Salce. 'It can be deflating and soul damaging, however, these are life lessons we all experience and Karma my life is about accepting these journeys, appreciating the turning point and celebrating the -positive experience' that changed your life."

The video clip is a fittingly uplifting collaboration with masterful Italian sand artist, Fatmir Mura. It fuses Fatmir's signature live, hand-crafted sand images to artistically tell the story behind Karma My Life and the resulting video is a compelling, literal work of art. Widely known around Europe, Fatmir's sand art videos have been creating a stir around the world. As soon as the band had the idea to collaborate with an artist to create a visual interpretation of the imagery of the song, they knew Fatmir was the man for the job. Anthony enthuses, 'As Karma My Life is an honest and emotive piece, we wanted the video to represent the changing nature of the band and the need to adapt to your surroundings, which Fatmir delivers very well in his sand art."

Excited to hit the road with their new tunes, Anthony explains, 'We always aim for a high energy vibe, as well as plenty of crowd interaction, it's about making that party vibe come alive through every song."

Tickets to all shows are on sale now via http://www.thehidingmusic.com 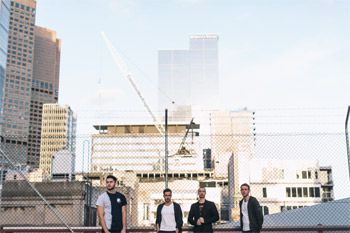 Interview with The Hiding


Question: Can you tell us about filming the video clip for Karma My Life? (watch the video here)

Anthony Salce: I approached via FB a Sand Artist who resides in Florence. I was amazed with how he could interpret and capture emotion through sand drawings. It was this honesty I wanted to use in a clip for the song I wrote Karma My Life.


Question: What can we expect from the upcoming shows?

Anthony Salce: You should definitely expect personal training advice from Ryan Di Cecco (bass player) and fun banter between 3 and 4 guys performing music and hoping to make new friendships! We are heading down a combination of live and electro sounds that are distinctively different from past live shows.

Anthony Salce: Yes we do. We only get it from life experience either ours or sometimes via our closest friends. If we connect to an issue or event, or situation that inspires us or in some cases brings us down, we write about it and hope it helps or shares an experience with others who tune in and listen.

Anthony Salce: I am a sucker for the 80's big time, but current local music I listen to Godwolf, Flume, Northeast Party House, The Rubens, Chet Faker, and City Calm Down.

Anthony Salce: Yes of course. I don't know of another industry that gives you more personal rejection. However, the rewards of playing on large stage which we have had the benefit of makes it all worth it. Those memories of international tours with your best mates are just memories you cant buy or take from someone.

Anthony Salce: I would say performing, as you get to see the crowd's reaction to your hard work firsthand. However, as my music progresses I am getting more fond of the studio and video clip world.

Anthony Salce: I didn't really have a person as such. For me it was music itself, music/lyric/melody. That's what grabbed me, and it was then that I would be inspired by the artist that delivered that song to the world.

Anthony Salce: Getting medium to high rotation in Australia on prominent stations, and consistently getting larger gigs well in advance so it can be promoted effectively.

Anthony Salce: Unfortunately we still have day jobs so mine starts at 6am and generally finishes at 8pm when I then lock myself downstairs and write until I have nothing left and then market online any news that may be deemed relevant. On tour, we would get up, head to near where we are playing, do some networking, contact venues and sound crew etc make sure everything is running to plan, try and fit in a radio interview and then head to sound-check.

Anthony Salce: Being excited to show people new music and or planning to head overseas to tour.

Anthony Salce: We rook a break working on a new sound, so when thinking of our new name we were finally out of 'hiding" so we called it just that.

Full Name: Anthony Salce
Nickname(s): Salce
Star Sign: Aries
Music Talent: Guitarist/Singer
Favourite Food: Spaghetti
Favourite Film: Back To The Future
Favourite Actor: Liam Neeson
Pet: Dog
Person You Would Most Like to Meet: My soul mate and luckily I have
First Job: Petrol station casual
Are you a Pub, Bar or Club kind: Bar
What Can You Never Leave Home Without: Wallet
What is the first thing you think of when you wake up in the morning: I'll get up in 10 more minutes!