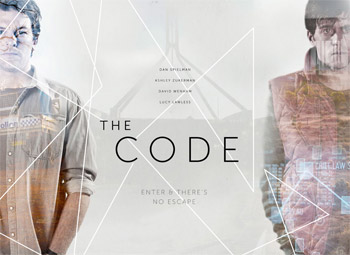 A new six-hour political thriller produced by Playmaker for ABC TV, The Code was filmed on location in Sydney, Canberra and Broken Hill.

Stretching from the spectacular red desert of Australia's outback to the cool corridors of power in Canberra, The Code tells the story of two very different brothers who unearth information that those at the highest levels of political power will kill to keep secret.

In the middle of the outback a stolen 4WD collides with a transport truck.  Two local kids in the vehicle are hurt. Badly. Someone should have called for help.  But they didn't.

They didn't because that -someone' works for a major stakeholder in an international research project no-one talks about.

The kids' accident would have remained a mystery if it weren't for Ned (Dan Spielman) and Jesse Banks (Ashley Zukerman) – a young internet journalist desperate for a break, and his troubled hacker brother on a strict good-behaviour bond.

Ned and Jesse Banks are gifted a poisoned chalice when a phone video of the outback accident arrives in their inbox. And posting it online will cost them more than they ever imagined. Together, they suddenly become the unlikeliest crusaders for democracy.

The decision to dig deeper drags the brothers into the darkest heart of politics, and the web of black marketeers and the international agencies who monitor and manipulate them.

The question is just how far those in authority will go to keep their explosive secret safe.

And just how far the two brothers will go to reveal the truth.

The Code was created by Shelley Birse and written by Birse, Blake Ayshford and Justin Monjo; directed by Shawn Seet (The Mystery of a Hansom Cab, Love Child, SLiDE) and produced by Playmaker's David Maher, David Taylor and Shelley Birse. It is executive produced by ABC TV's David Ogilvy, Greer Simpkin and Carole Sklan.

A Playmaker production for ABC TV, The Code was developed through the Scribe Initiative and is produced with the assistance of Screen Australia, Screen NSW, the ACT Government and Screen ACT.

Ned Banks (Dan Spielman) has spent the last ten years juggling a stalling
career as an online journalist with caring for his talented but troubled
brother, Jesse (Ashley Zukerman).

When Alex Wisham (Lucy Lawless) sends him a video file of an accident in
the outback involving two teenagers and a truck from a highly classified
research facility, Ned thinks his big break has finally come. But the video
file is corrupt.

With Jesse's help, Ned is able to clean up the video, and its contents are
shocking. Ned and his boss Perry (Adam Garcia) attempt to publish the
video online but the response is immediate and frightening: they're warned
to leave the story alone or face serious repercussions.

The prospect of the accident going public is scaring powerful people in
Parliament House. The Prime Minister's Chief of Staff, Randall Keats (Aden
Young) and Director of Communications, Sophie Walsh (Chelsie Preston
Crayford) are directed to feed one of their own Minister's infidelities to the
press gallery in an attempt to distract them from the explosive story behind
the accident.

However, the swift and stern reaction to the video drives Ned to investigate
further, and he books a flight to the accident site - a decision that will have
deadly consequences.

As Ned Banks' plane touches down in the remotest corner of the state,
he has no idea his brother Jesse is being interrogated by one of the most
powerful law enforcement agencies in the country.

The Cyber Crime Unit, headed by Malcolm Coover (Steve Rogers) has been
tracking Jesse's online activities and wants to know why he was hacking
into a highly classified research facility, what files he downloaded, and who
he's working for. They're also keeping a keen eye on Jesse's newest cyber
playmate, Hani Parande (Adele Perovic). Hani is of Iranian descent and has
a bumpy history with Coover and the Cyber Crime Unit.

Out west, Ned meets Clarence (Aaron McGrath), one of the kids from the
car accident who is still seriously ill, and starts piecing together the details
of the crash. What becomes clear is that the company who owns the truck
is involved in research that they are desperate to keep secret.

Meanwhile, the company is fast distancing itself from its Head of Security,
Andy King (Paul Tassone) who has gone rogue following the accident.

With access to some of the country's most highly classified material, King
is targeted by a whole host of powerful stakeholders radically vested in
seeing him silenced.

Among them is Coover from the Cyber Crime Unit, who orders Lyndon
Joyce (Dan Wyllie) to help find his old colleague and friend before things
get completely out of hand.