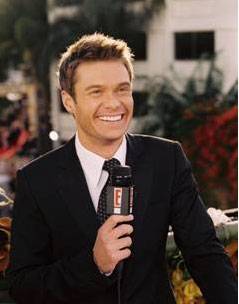 E! GIVES VIEWERS A FRONT ROW SEAT AT THE 2009 ACADEMY AWARDSŪ WITH 6 FULL HOURS OF LIVE RED CARPET COVERAGE FROM THE INDUSTRY'S MOST HONOURED NIGHT OF THE YEAR

From the global success of Slumdog Millionaire to the return of Mickey Rourke to the posthumous nomination of Heath Ledger, the 2009 Academy AwardsŪ are poised to be one the most exciting nights in Hollywood. Entertainment fans from around the globe will be tuning in to the Oscar's telecast to celebrate this momentous year in film, and E! will be there with 6 full hours of LIVE coverage. Ryan Seacrest and Giuliana Rancic, along with E!'s award show correspondents, will be positioned along the red carpet to give fans an extensive insider's look at the 2009 Oscars. From the pre-show preparations and analysis of the nominees to the glamorous celebrity arrivals and exclusive after-parties, every star-studded moment will be featured in E!'s unprecedented coverage of the 81st Annual Academy AwardsŪ.

The famed Kodak Theatre is the backdrop for Hollywood's most recognized and talented actors as they descend on the red carpet to pay homage to their nominated friends and colleagues. No other night of the year comes close to the star power that Oscar night brings to its global audience and E! will capture all the excitement, glamour and fashion with 20+ cameras, more than any other show. In addition, our signature red carpet fashion cam, our exclusive arrivals camera and aerial views from E!'s blimp cam will keep fans on the evening's front line. As the A-listers hit the red carpet, our "Star Tracker" cam makes its return, following select stars' location in real time on the celebrity-packed scene.

The day kicks off early with E!'s Countdown to the Red Carpet: The 2009 Academy AwardsŪ, featuring a recap of all the nominees and their outstanding performances. Whether it's a man aging backwards in "The Curious Case of Benjamin Button," a slain gay civil rights icon in "Milk," or a mother struggling to find her missing son in "Changeling," this years' Oscar field is as eclectic as it is groundbreaking. E! will take a comprehensive look back at these nominated films, and the rest of the honoured features that make up this year's field. Some recognizable faces will stop by the Countdown show this year including Matt Walsh, Ken Jeong and Jo Lo Truglio from the comedy "Role Models." With style on the mind, some of our favourite past contestants from the hit series "America's Next Top Model," along with 12 Victoria Secret models, join E! for our own runway show to feature today's hottest fashions and the latest creations in lingerie. Additionally "The Soup's" Joel McHale give fans his own hilarious take on all the nominated films while WWE superstar John Cena jumps in the ring with E!'s movie man Ben Lyons to show off some moves.

Following the Countdown pre-show, Ryan Seacrest and Giuliana Rancic take the stage for Live from the Red Carpet: The 2009 Academy AwardsŪ. Ryan will be front and center on the carpet with today's most respected and admired Hollywood stars while Giuliana will reign high above the action from the E! Sky Box. Joining Giuliana are E!'s own Ben Lyons, Ken Baker and Jay Manuel who will provide live entertainment news updates and fashion commentary. From first-time nominees to established industry icons, all the stars will be stopping by E!'s platform on the A-list Oscar red carpet.

E! Online brings its own incomparable coverage of the 2009 Academy AwardsŪ to entertainment fans around the globe. Leading up to the big night, movie man Ben Lyons posts his predictions in all the big categories and users can see if columnists Ted Casablanca, Marc Malkin, Cristina Gibson and Leslie Gornstein agree. Film aficionados have the chance to make their own picks on the interactive poll and print a scorecard to be fully prepped for their own Oscar bash. On the day of the show, E! Online will post arrival photos of some of the biggest celebrities and fashion critics can rate the A-list couture from the comfort of their own homes. Reporters will also be liveblogging and Twittering from this year's hottest red carpet, posting all the breaking news, coverage of the winners and backstage interviews. Afterwards, the night's most fashionable stars compete in our new interactive game, the Red Carpet Pose-Off. Users vote on celeb pairings (i.e. Angelina vs. Anne Hathaway) until a final winner for Oscars emerges...sort of like March Madness with expensive dresses.