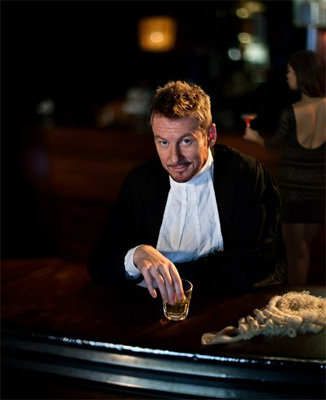 Cast: Richard Roxburgh, Matt Day, Adrienne Pickering, Russell Dykstra, Danielle Cormack, Caroline Brazier, Hugo Weaving, Rachel Griffiths, Sam Neill, Lisa McCune, Noah Taylor
Synopsis: On any single day, Cleaver Greene is described as many things. Whilst his ex-wife may call him 'unreliable', his son will call him 'a mate'. To his learned friends at the bar table he is 'a real wag', to his jurors he is 'hilarious', and to most judges he is 'an outrage'. To the Tax Office, he is 'a defendant', to a certain brothel owner 'a legend', and to his former cocaine dealer 'a tragic loss'. The clients he loves the most - the cases that thrill him - are those that appear to be utterly hopeless. There's something about being on the wrong side of conventional wisdom that feels right to him, be it at the bar table or the dinner table. He will do whatever it takes to defend and save life's truly lost souls. The big sinners. Its drug lords. Its cannibals. Its bestialites. And at the same time, he will struggle to save himself, to stop himself falling back into the abyss that has characterised most of his self-destructive adult life thus far. Despite his own hopelessness, his wit and charm have won him hordes of companions over the years.

Most nights of the week, there is no shortage of invitations: dinner with a judge at the RMC (His Honour pays), or with some drug dealers in Chinatown (Manos pays), or with some of his copper mates at the Matador (no one pays). Any gaps in his diary will inevitably be filled by either all night sessions in chambers preparing for court or similarly lengthy sessions at his favourite brothel, simply referred to by those in the know as 'the Club' (here, Cleaver is more than happy to open his own wallet). He tends to wake up bruised. Physically. Emotionally. Spiritually. Usually it's a combination thereof. He spends a nano-second wondering how his life came to this - living in a studio above a café in the Cross, without his wife and son, in love with a prostitute, defending hopeless cases. Then he gets up, puts on his dressing gown and a pair of brogues and goes downstairs for a coffee. Then it's out into the world - onto the battleground that is Cleaver Greene's day.

Episode 1: R V Murray
Thursday, November 4th, 8:30pm
Writer/Director: Peter Duncan
Barrister Cleaver Greene's life continues to spiral out of control - the latest blow being the beating he's just received from Mick Corella's stand-over man Col for unpaid gambling debts. As usual, Cleaver retreats to the arms of his lover/friend/confidant Missy, a high class call girl who works at a brothel also frequented by Cleaver's friend, Attorney General, Joe Sandilands. While trying to secure a room in chambers and fend off an on-going unpaid tax case against him, Cleaver is presented by best friend and solicitor Barney with a case he can't resist - the defence of Professor Graham Murray, a world renowned economist accused of cannibalism. Meanwhile, Barney's wife Scarlet - who herself has had dalliances with Cleaver - confronts him with the news that she has fallen out of love with her husband. On his next visit to the brothel, Cleaver is devastated to discover that Missy has quit her job and left no contact details, so he turns to his psychologist ex-wife Wendy for solace. Wendy commiserates, but reminds Cleaver of their son Fuzz's unpaid school fees. Fuzz, meanwhile, draws his indulgent father into a conspiracy to cover up his activities with his new girlfriend. After an accidental meeting in the city, Missy sternly rejects Cleaver, tells him that their relationship was strictly professional and she's now studying law. He is heartbroken. Meanwhile, Cleaver and Barney discover that cannibalism is not considered a crime in New South Wales, so Attorney General Sandilands has engineered a charge of murder against Professor Murray. Cleaver sees his chance - Murray might be a cannibal, but he's not a murderer! As the prosecution paints a picture of clever predator, Cleaver uses the professor's wife to elicit sympathy from the jury and to highlight her husband's insanity. Cleaver is surprised and overjoyed when Missy makes an unexpected visit to his flat and admits that she does owe him an explanation...and, she tells him her real name...Melissa.

Episode 2: R V Marx
Thursday, November 11th, 8:30pm
Writer/Director: Peter Duncan
Cleaver's gambling debts are mounting, but on the upside, and much to the chagrin of tax lawyer David Potter who's been in constant pursuit, Cleaver has managed to get the case against him adjourned once again. But trouble is brewing with Barney and Scarlet's marriage and Cleaver is the meat in the sandwich. After their recent heart to heart, Scarlet turns up at Cleaver's flat and hints at an affair, hiding when Barney arrives a few minutes later. Meanwhile, Cleaver and Barney take on a case of jury tampering, where Lucy Marx, an attractive 40-year-old - a detail that doesn't go un-noticed by Cleaver - has made headlines by seducing a juror for information after her daughter is found guilty of murder. But Cleaver is left reeling when Missy turns up at a restaurant on the arm of his nemesis David Potter, who later makes headlines himself when he tackles a gunman, gets shot, and becomes a 'hero'. Meanwhile, Cleaver reluctantly agrees to let his son Fuzz use his flat for assignations with his girlfriend, while Fuzz's mum is kept in the dark. Barney, convinced that Lucy Marx is right about her daughter's innocence, sets off to unearth the real murderer, but doesn't quite get the result he was looking for. With a tip-off from his prosecutor wife Scarlet, Barney warns Cleaver that Lucy Marx is using him. As Cleaver tries to manipulate the court case, his relationship with Lucy Marx is revealed, and makes him, yet again, the target of investigation by the Bar Association. As he drowns his sorrows in a local bar, Cleaver looks up to see Scarlet standing outside in the rain looking at him longingly. Can life get any more complicated for Cleaver Greene?

Episode 2: R V Dana
Thursday, November 18th, 8:30pm
Writer: Andrew Knight Director: Rachel Ward
Consumed by remorse after sleeping with his best friend's wife Scarlet, and facing his ninth appearance before the Bar Association, Cleaver gets a needed distraction defending a famous chef charged with bigamy. And to add insult to injury, as he and Barney commiserate at a favourite bar, Missy arrives once more with David Potter. The bigamy case is going well...that is until Cleaver discovers his client had left out some very important details. As Cleaver receives another late night phone call from Missy, they're both left wondering what it is they can't let go of.

Episode 4: R V Lorton
Thursday, November 25th, 8:30pm
Writer: Andrew Knight Director: Rachel Ward
Cleaver takes on a case defending a once famous but now homeless artist who is accused of murdering a 15-year- old male prostitute. Cleaver's guilt about Barney and Scarlet sees him make a drunken spectacle of himself in front of Missy and David. But Missy is struggling to keep up her charade with David as he considers running for public office. To add to Cleaver's woes, he and Wendy discover that Fuzz is dating his very young and attractive English teacher. At Barney's insistence Scarlet relents and makes up a name for the man she slept with...a name that implicates Cleaver.

Episode 5: R V Chandler
Thursday, December 2nd, 8:30pm
Writer: Peter Duncan Director: Jeffrey Walker
Cleaver prepares to defend family friend Dr. Bruce Chandler, when a very incriminating DVD finds its way to the local police. Meanwhile, Barney won't speak to him, and ex-wife Wendy blames him for Fuzz's predicament, so Cleaver turns to gambling and cocaine, scoring another beating from Mick Corella's stand-over man. Then a homeless Scarlet arrives on his doorstep, followed closely by Missy railing at the realities of partner David's new political life. And when Wendy arrives looking for Fuzz, Cleaver is left reeling. A call from Joe Sandilands has Missy scurrying back to dependable David, while Cleaver seeks solace in another line of coke.

Episode 6: R V Langhorn
Thursday, December 9th, 8:30pm
Writer: Andrew Knight Director: Jeffrey Walker
Unable to resist her charms, Cleaver agrees to defend an old flame - now a successful radio shock jock Eddie Langhorn - who's charged with inciting racial hatred. Meanwhile, his tax case catches up with him and he's placed on remand. Then he learns his father has had a stroke. Scarlet, acting as prosecutor on the Langhorn case, is stumped by Cleaver's impressive defence, but Barney comes to her rescue. Cleaver despairs when he realises his client has conned him but allows himself a glimmer of hope when Missy arrives unannounced once more. But she's come to tell him that she and David are getting married!

Episode 7: R V Tanner
Thursday, December 16th, 8:30pm
Writer: Peter Duncan Director: Jessica Hobbs
Attorney General Joe Sandilands is 'outed' as a brothel patron and, devastated by the scandal, commits suicide. Meanwhile, Cleaver is hit over the head during a botched robbery at a pharmacy, along with one of the robbers who is accidentally hit by his accomplice. When the robber dies, Cleaver is enlisted to get his mate off manslaughter charges. Another case of assault also has him intrigued when Missy recommends him to defend the assailant and a few secrets about her life emerge. Joe's suicide affects everyone, especially Missy, who's probably the last to see him alive. Once again she turns to Cleaver.

Episode 8: R V Corella
Thursday, December 23rd, 8:30pm
Writer: Andrew Knight Director: Jessica Hobbs
Cleaver is forced to defend his loan shark Mick Corella on murder charges, and it means working with Barney again. But hope of dodging his back taxes is fading fast. Meanwhile, a dejected David sees his career go up in flames when the party he's been elected to loses government. Missy tries to commiserate, but finally crumbles, blurting out the truth about who she is. Meanwhile, as Barney and Scarlet make up, and Missy tells Cleaver it's over with David, she is taken aback by his reluctance to commit. When Corella is convicted, Cleaver sees an end to his debt problems, but a surprise is in store. Cleaver and Barney are friends again ... and life is good!