SYREN A Feather To The Sea Interview 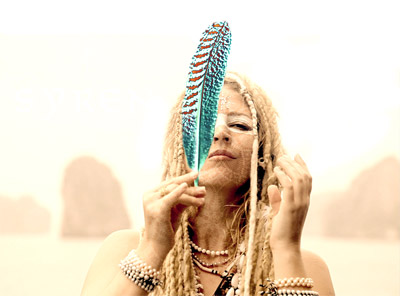 SYREN A Feather To The Sea Interview

Inspired by the sea and the enduring spirit of the land SYREN is a producer of soulful trip-step directed to creating an aural journey through culture, psyche and consciousness back to our inner nature.

Her debut EP A Feather To The Sea due out Spring 2012 is an enchanting concoction of angelic vocals, crunchy beats, undulating bass lines and conscious lyrics to harmonise our frequencies to the spirit of the land.

To celebrate the launch of SYREN'S first official video clip, -A Feather To The Sea', directed by filmmaker Timothy Parish (www.verbstudios.com.au) and filmed in Halong Bay, Vietnam, www.Undergrowth.org will be hosting a launch party at First Floor in Brunswick St, Fitzroy on Friday, April 26th at 8pm.

This show will take your senses on a journey of a lifetime that will tattoo your mind forever!

Question: How would you describe A Feather To The Sea EP?

SYREN: It is about the female initiation through life by traveling to the depths of her shadows and her journey stripping down her layers. I create a platform to take the listener on a sensorial journey of the feminine world, to reconnection with her fears of and an insight to the women's complicated mind and the way she reflects back onto the madness of the world of today. I wanted to sing stories with a soulful Trip step crunchy beats sound along with an epic cinematic feel using live electronic instrumentation with undulating Dub step bass lines.


Question: Can you tell us about creating the first official video clip?

SYREN: In January 2012, I travelled with my partner film maker Timothy Parish to the breathtaking Halong Bay in Vietnam to film the video clip for the song 'Feather to the Sea'. Tim and I were traveling in South East Asia and came up with the vision of the clip inspired by the myth of the siren as a being of sound when sang to sailors, caused them to jump from their ships. Our concept was perhaps the siren was actually an earth spirit that was calling for mankind to understand the deeper nature of reality and therefore by 'jumping ship" these men were actually rejecting their warlike conquests and escaping their naval boats of imperialism.

In preparing for the shoot, we designed a costume with arm-length wings which was made by incredible tailors of Bangkok, Thailand. We then traveled to Hanoi and motored by boat to the incredible Cat Ba Island in the middle of The Ten Thousand Islands of Halong Bay. From here we rented a smaller boat and explored the islands until we found the perfect location to shoot the majority of the clip.

The video explores themes of human destruction of nature including footage from the tar sands in Canada, as well as the Hazelwood Coal Power Station, the world's dirtiest power station, as symbols of the destructive thirst for energy which mankind craves.


Question: Tell us about the inspiration behind A Feather To The Sea EP?

SYREN: I get inspired by my surroundings, when writing music and my lyrics. I have an intimate relationship with nature and the changing seasons, I love the tropical environment of the NT and Queensland rainforest, from the wet season's pregnant skies to the dry season's fires and traditional cultures have been major influences on my work. I love the feeling of dancing with water like I'm dancing with the water spirits so recorded the sound of splashing water for the main rhythms in -Lacuna Water'. Each song of the EP has an elemental concept to it being water earth, air, fire and spirit. It also has an underlying environmental message interwoven through the lyrics.

SYREN: The video clip launch on April 26th then playing in Darwin for the Sea Breeze Festival on the 11th May then over to Europe to do shows then back for the Australian summer festival season! The video clip will be the first of a series that we will be launching over the year that will combine into one long narrative about the reconnection to the Earth through the spirit of sound. We will launch the full film with all of the five video clips at the end of the year. I have written my next full length album so I'll head back into the studio at the end of the and will release it mid-year 2014.

SYREN: Yes, when my sound engineer Benjamin Last's mother board fried on his computer and we had to get another computer and re-program all of the plug-in fx. There was a lot of tears and fear of losing all of the production and mixing for the track 'Insomnia". I lost some sleep over it!

SYREN: I love writing a new song, creating unique sounds and textures; it feels like you're creating magic! I get super excited in the studio because anything is possible. But I love performing live, sending out a full frequency spectrum of sounds for the audience to melt into, they get lost in their own dance, it's feels like we are all connected. It's such a freeing feeling! I love to channel the siren spirit into my performance and lose myself in the moment when I'm on stage, so I would have to say performing!

SYREN: My mother has worked with a number of music festivals like The Country Music Muster, Woodford Folk Festival and Tamworth Country Music Festival since I was a young child, so I was always surrounded by musicians and the festival culture. I love all kinds of folk music, but didn't really get into country and was more inspired by contemporary music genres. I've learnt music since I was a child, singing in bands at high school and so on, but I found my love with the synthesiser and a drum machine when I was living in Scotland in 2002 and all of my friends were electronic producers and DJs. I decided this is what I wanted to do was to make music to elevate the soul....

SYREN: Managing life, booking gigs, designing, mixing, emails, working for a radio station you have to be able to do it all. I'm always doing massive hours! It's all part of the journey!

SYREN: Yoga in the morning then email's and coffee then I ride my bike to my studio and work on my radio job mixing, then it's a rehearsal for a festival or a gig then I might keep mixing a new song for the set or working on a remix or finish mastering a feature length documentary! So much in one day!

SYREN: I love writing a new song from an experience or a dream then taking the story and bring it to life. Infusing the rhythms of splashing water adding lush layers to the song to taking the listener on a journey. I love playing live with different musicians, every set is so different from the next. I always love to meet new people at festivals, make new connections to create with. I love collaborating with different interesting musicians who play amazing instruments like a Sitar or harp, writing songs together and learning from each other.

SYREN: At the moment I would love to collaborate with Trentemøller from Germany. Love his production style, he is able to create interesting dimensions with in his original dynamic sound.


Question: What was it like working with Benjamin Last?

SYREN: Amazing Benjamin Last " Blast" (Temple Step Project/Reel Spirit Studios) is a wizard of sound! We shared the same vision for my music so it was a very easy procedure of working on the production and mixing process... We would deeply understand each other to the place where we didn't need words.


Question: What is the story behind the name?

SYREN: The name came about when my partner Timothy Parish and I were writing a theatre piece called "Water Spirits". We were developing a character and re-writing the siren story into a new myth. I was in Byron at the time working on the production for my EP and I love the ocean and I felt like I was some kind of Siren. There was a group of women at a day spa one night and I was talking to a friend and she asked me what my Artist name was and it swam out of my mouth... 'Syren"