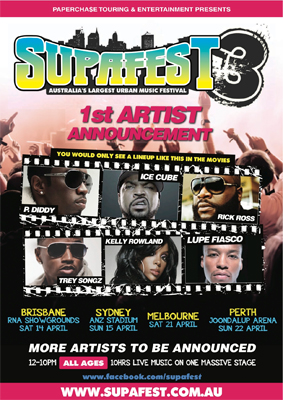 Paperchase Touring and Entertainment are thrilled to announce the first exciting artist announcement for Supafest 2012. Last year's Supafest drew worldwide media attention with over 90,000 people attending across the 4 shows. Gaining recognition as one of the world's largest and most important RnB and Hip Hop Music Festivals, Supafest has once againdelivered some of the biggest and best acts in the urban genre. Supafest producers Dwayne Cross and John Denison stated, "Supafest is now in it's third year and has fast become a Festival that is much anticipated amongst the Hip Hop and RnB fans as young as 15 years old. Our roles as producers of Supafest are to showcase a wide array of the most exciting talent the genre has to offer each year. 2012 will be no different - our first artist announcement features some of the genres most influential acts including P. Diddy, Rick Ross, IceCube and Lupe Fiasco amongst others. We can't wait to rollout the full artist announcement for 2012. Our fans have every reason to be excited!"

Not only is P.Diddy an iconic hip-hop legend, a successful actor and an incredible entrepreneur, he is also a certified global superstar. Over the past 14 years, he has released 5 successful albums featuring many worldwide hitsincluding "I'll Be Missing You" featuring Faith Evans, "Come To Me" featuring Nicole Scherzinger, "Hello Good Morning", "Tell Me" featuring Christina Aguilera, "Coming Home" featuring Skylar Grey, "Bad Boy For Life", "Last Night" featuring Keyshia Cole and many more. He started his career at Bad Boy Records, the record label he founded, and not only mentored a generation of talent - from Mary J Blige, and Usher, to Lil' Kim and TLC - but he also perfected "mainstream" hip-hop, a genre which changed the face of popular music. He has produced hits for Mariah Carey, New Edition, Boyz II Men and Aretha Franklin amongst others, and put arguably one of the greatest rappers of all time, Notorious B.I.G on the map. His latest music project, "Diddy - Dirty Money" allowed him to explore his passion for dance music, which he grew to love through his travel to global hot spots like Ibiza and Berlin. Diddy-Dirty Money is an R&B/Hip-Hop collective featuring Dawn Richards, Kalenna Harper and of course Diddy. This exciting direction for him blends elements of UK grime, Mediterranean techno, and the 808's of American Hip-Hop. The result is "Last Train To Paris" which was released in 2010. In addition to records, Diddy has a sprawling business empire including a clothing and fragrance line, a chain of restaurants, and a successful reality show "Making The Band" on MTV, amongst many other things.

In the five years since he first marked his territory with "Hustlin", Rick Ross has slowly built his personal and professional empire to become one of the world's hottest rappers and Hip-Hop Entrepreneurs. His consistency and lyrical skills has placed him among hip-hop's elite, while with each passing year and chart -topping album, Ross's stature in the game has continued to steadily grow. Ross rose out of the underground Miami rap scene with one of2006's biggest singles "Hustlin". The ringtone alone sold 1 million copies and was certified platinum before his buzz worthy debut album "Port of Miami" had even been released. He followed it up with 2008's "Trilla", 2009's "Deeper Than Rap", and 2010's "Teflon Don". Ross also founded the successful record label Maybach Music Group and recently released the number 1 rap album compilation "Self Made Vol 1" which features the label's acts including two of the most hyped hip-hop artists of 2011, Meek Mill and Wale. "Tupac Back" and "Ima Boss" are currently dominating hip-hop radio and clubs in the US. With Ross currently touring the US with Lil Wayne to rave reviews, Supafest will be his first trip to Australia.

Ice Cube is nothing short of an entertainment icon that has conquered music, film and television. As one of the founding members of N.W.A, Ice Cube helped solidify West Coast gangsta rap's place in hip-hop culture, and went on to have a hugely successful solo career, releasing 9 albums to massive acclaim. In late 1989, Cube recorded his debut album "AmeriKKKa's Most Wanted", which was an instant hit, riding and contributing to the rising tide of rap's popularity in mainstream society. The album was hailed as a groundbreaking classic and established Cube as an individual force. This was followed by a critically acclaimed role as Doughboy in John Singleton's drama, Boyz in The Hood, which started his illustrious acting career. Over the next 20 years, Ice Cube continued to release successful solo albums selling millions of copies and featuring tracks like "It Was A Good Day", "Check Yo Self", "You Can Do It" and "Go To Church" all topping the charts. Cube's Hollywood movie career also continued to grow and saw him move into directing and producing and establishing two major comedy franchises in the Friday trilogy and the ongoing Barbershop series. Supafest is thrilled to have a living legend in hip-hop gracing the stage for Australian fans.Kelly Rowland is currently one of the hottest females on the planet - period. This Grammy Award winning artist has been part of one of the most successful groups of all time, has a hugely successful solo career, has sold millions of albums worldwide and has starred in motion pictures and TV. Her latest single "Motivation" featuring Lil Wayne is currently sitting at the top of the US charts and her next single featuring rapper of the moment, Big Sean is due to be released shortly. Kelly launched her post-Destiny's Child solo career by teaming up with rapper Nelly in 2002 for their worldwide #1 hit "Dilemma". After two successful solo albums "Simply Deep" and "Ms. Kelly", Rowland was ready for a new direction. She teamed up with French DJ David Guetta and ended up making one of the biggest singles of 2009, "When Love Takes Over", and followed it up with 2010's "Commander". Having blown audiences away at 2010's Supafest, Paperchase Touring and Entertainment are thrilled to have Kelly Rowland back. Her latest album "Here I Am" is out now.

Grammy Award Winning artist Lupe Fiasco first burst onto the scene in 2006 with "Kick, Push", a single that sounded like nothing else in mainstream hip-hop and instantly heralded the arrival of a unique voice. Aided by endorsements from Jay-Z and Kanye West, the rookie MC's first full length debut, "Lupe Fiasco's Food & Liquor" would go on to earn four Grammy nominations. A year later, his next album "The Cool" reached even greater heights spawning the Top 10 single "Superstar". Both these albums earned him a reputation as a rap philosopher, a sharp, dynamiclyricist, and an MC who could shock you, make you think, make you dance, make you laugh and all without resorting to vulgarity or tired hip-hop alliterations. The Chicago-born MC released "LASERS" after a four-year hiatus in 2011. His massive group of dedicated and loyal fans grew restless during his downtime and more than 32,000 fans signed a petition demanding his record label released "LASERS". His most recent body of work features some of the most thought-provoking rhymes and concepts Fiasco has ever conceived, and features the hit singles "The Show Goes On", and "Out Of My Head" featuring Trey Songz.

Since making his recording debut in 2005, the Grammy Award nominated crooner Trey Songz has crafted some of the most acclaimed and compelling R&B slow jams of the decade. In a short amount of time, Trey has released four studio albums, has won the prestigious title of Best Male R&B Artist at the BET Awards, starred in his own hit TV show on BET - My Moment, has toured the world numerous times over and has shared the stage with the likes of Nicki Minaj, Lil Wayne, Drake, Jay Z and Ludacris to name but a few. While on tour in Australia in early 2011 with Usher, Trey performed two sell out solo shows, where he bought the house down with his numerous hit singles and incredible stage swagger. His latest album "Passion, Pain & Pleasure" is Songz' hugely anticipated follow-up to his gold-certified smash, "Ready". With four hit singles, "Bottoms Up (feat Nicki Minaj)", "Love Faces", "Can't Be Friends" and "Unusual (feat Drake)", "Passion, Pain & Pleasure" confidently confirms Trey Songz rightful place at the very forefront of contemporary urban music.

With shows in Sydney, Perth, Brisbane and Melbourne, Supafest 2011 promises to deliver some of the most exciting and leading performers in the Urban Musicworld today.