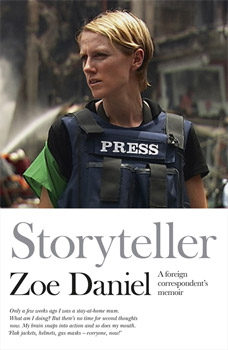 Zoe Daniel is not just a working mother. She is the uber working mother. By day an ABC TV foreign correspondent reporting from war-torn countries, by night a mother and wife who tucks her two young children into bed. One of only a handful of foreign correspondents who are also mums, Zoe's story is as unique as it is compelling. Zoe has been the ABC's correspondent in Africa and South East Asia reporting on conflicts and natural disasters from countries like Cambodia, the Phillipines, Thailand and the Sudan. In Storyteller we step behind the camera to expose what life was like behind the scenes.

When Zoe reported from conflict zones like Sierra Leone, Somalia and Darfur on famines, tribal warfare and the ravages of AIDS she was planning her first baby. When she covered the Khmer Rouge war crimes trials in Cambodia she had a new baby and toddler. When she was dodging snipers to file stories on the political protests in Bangkok her young family had fled the country to safety, and when she was reporting on Indian conjoined twins she had her own two children at home.

Storyteller is a frank account of the effects of Zoe's work - with its stresses and constant travel - on her marriage, of the psychological and physical effects of a dangerous job and of the difficulty of slipping back into her -regular' life after witnessing deeply disturbing events. It is the story of a mum and the universal juggle of career and family. Kids' birthday cakes, dangerous assignments and deadlines jostle for her attention as she faces the challenge of raising her quickly growing children while pursuing the career she loves.

Told by one of Australia's most experienced foreign correspondents, who has witnessed and reported on some of the most significant current affairs of recent times, Storyteller is also a fascinating insight into the politics and history of Southeast Asia.

Zoe Daniel was the ABC's Africa correspondent during 2005 and 2006 and spent 2009 covering the Khmer Rouge war crimes trials from Phnom Penh in Cambodia. She was the ABC's South East Asia correspondent until December 2013. She lives in Melbourne with her husband and two children.

Question: Why did you think it was important to write Storyteller?

Zoe Daniel: I decided to write a book about my experiences as a mum and foreign correspondent because it seemed to be a very uncommon story. Even in 2014, there are very few female correspondents with children. It seems to me that there has been a tendency to assume that the job is too demanding for a woman with children to cope with. Don't get me wrong, the constant travel, deadlines and pressure make it a difficult juggle but my family and I have enjoyed it very much and we've all become better people too.


Question: What inspired you to become an ABC TV foreign correspondent?

Zoe Daniel: I'm at my best when I challenge myself and I really wanted to test myself outside Australia and to work in remote environments and within different cultures. The adventurous travel is an obvious attraction but so is being able to bear witness to history unfolding. Being a correspondent is a very privileged existence because you get to meet amazing people and spend time with them in their own countries so you can really start to understand their situation. That makes for much better storytelling.


Question: How does what you see and experience whilst in countries experiencing conflicts and natural disasters differ from what we see on the camera?

Zoe Daniel: It's true to say that reports for a home audience are sanitised in comparison to what we actually see on the ground. In the aftermath of the Philippines Typhoon Haiyan for example, we saw hundreds if not thousands of bodies but we couldn't really show much of that to our audience because it would be too confronting. I have a view that you should never be gratuitous with what you show but you have to sensitively convey the reality of each situation so that the audience can understand exactly what's going on. I'd make the point that to cover a disaster where thousands of people have been killed without showing any death at all is not reporting the truth. It's a very fine balance and one that we do our best to achieve. Talking to people who are affected who can convey what's happened in their own words is the most compelling way to do that, again, being sensitive to their often very deep grief.


Question: How difficult was it for you to learn to slip back into -regular' life after witnessing deeply disturbing events?

Zoe Daniel: During my time as a correspondent I often felt that I was living a double life; returning from covering deadly protests to potty training my daughter, coming back from covering food shortages in Africa to a nice meal and a glass of wine...it does provoke a sense of disconnection and sometimes guilt. I think you have to recognise those feelings for what they are and give yourself some time to reconnect with family and friends after a difficult assignment. I think too that the sense of heightened awareness and anxiety about what might happen next can be very debilitating. Finding ways to relax is very important.


Question: Do you have any advice for mothers who are beginning to re-enter the workforce after having children?

Zoe Daniel: In hindsight I would say relax and enjoy the time with the children when they're young and then relaunch your career when you're ready. It didn't really happen by design for me, but I was lucky in that the way it worked out was that I had three years off to totally focus on being a mum and then jumped back into intense, full time work. For me that worked best. I never found working part time very satisfying because I felt that I was half mothering, half working and not doing either very well. I also think we all have a tendency to assume that taking a block of time off work will set us back so far that that we can never catch up again. I don't think that's necessarily true, particularly if when you do return to work you go back full time. I'd never trade that time off with the kids for anything, much as I love my work, I really enjoyed the time at home with them when they were babies.