Australia is set to welcome an innovative and contemporary spiced rum into the market, adding to Australian bartenders' selection for their current spirit of choice for eclectic cocktails and mixed drinks.

Stolen Spiced is a world first product infusing fine Caribbean rum with roasted coffee beans and tobacco flavour. In the US the product will be named 'Stolen Coffee and Cigarettes Spiced Rum", however due to anti-tobacco advertising legislation in Australia, the product will be launching with a censored label.

Stolen Rum has become somewhat of a cult hit in inner city bars, after a quirky campaign successfully convinced trans-Tasman travelling fans of the product to carry banned bottles of the un-aged, overproof rum, Stolen SX9, from its Kiwi home to bars in Sydney, Brisbane, Perth and Melbourne. Stolen Rum's Kiwi creators took a step away from the traditional 'pirates and palm trees" approach to rum making encapsulating Stolen's renegade attitude against the same-old existing rum philosophy.

Stolen Spiced is best enjoyed when mixed over ice with Lemonade and a wedge of lemon as the unique coffee and cigarettes flavour adds complexity to simple taste profiles.

Fill a tall glass with ice and pour over Rum. Squeeze lemon wedge over and drop in. Top with Lemonade, stir and serve. 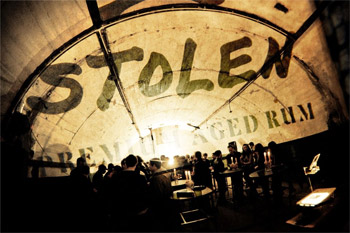 Fill a short glass with ice and pour over Rum. Squeeze lime wedge over and drop in. Top with Coca-Cola, stir and serve.

Fill a tall glass with ice and combine all ingredients and stir. Garnish with lemon slice.

Combine ingredients in a mixing glass with ice and shake well. Strain into a chilled cocktail glass. Garnish with a thin lime slice.

Combine all ingredients in a mixing glass with ice and shake thoroughly. Strain over ice in a short old-fashioned glass. Garnish with an orange wedge and a mint sprig.