Breaking the Stigma Is the Only Cure for Tourette Syndrome

Two-thirds of Australians (64%) believe more needs to be done to educate children in schools about Tourette Syndrome, as new research reveals one in four (23%) have never heard of the condition.

"Increasing awareness of this condition is critical if we are to help break the stigma and ensure that those with Tourette Syndrome have access to the same opportunities," says Robyn.

Tourette Syndrome is a commonly misunderstood neurological condition that is often attributed to behavioural or emotional issues. It affects approximately 45,000 children in Australia and results in involuntary muscle movements and vocalisations.

As just 15% of parents have taught their children about the condition, it reinforces the requirement for further education on Tourette Syndrome. Due to the lack of education, some of the most common misconceptions include that tics are simply nervous habits (57%), Tourette Syndrome affects a child's ability to learn in school (53%) and the condition is simply shouting obscenities (23%). While Tourette Syndrome does impact access to learning, it does not affect intelligence.

Robyn says, "Our research shows the significant level of misunderstanding that surrounds the condition. Misconceptions about Tourette Syndrome can be very damaging to a child's development.

"Education is the key to breaking the stigma surrounding Tourette Syndrome. Schools and parents have a responsibility to teach children empathy and understanding, through their own words and actions.

"Having discussions with children from a young age will encourage empathy and build understanding of the diversity in our society," says Robyn.

Robyn says, "The app has been designed to directly support the education and awareness of children living with Tourette Syndrome in schools throughout Australia.

"TAC'TICS is a fun way to get people with and without Tourette Syndrome involved in learning more about the condition for which there is no cure. For now the best treatment is community awareness, understanding and acceptance," says Robyn. 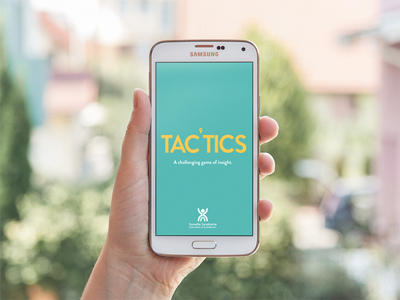 Sonia Hely is a TSAA Support Group Leader; her daughter Alexandra has Tourette Syndrome. Alexandra is an Australian Champion at Fencing.

Question: What do you hope to achieve this coming Tourette Syndrome Awareness Week?

Sonia Hely: To educate people on what Tourette Syndrome (TS) is and how difficult it is to live with. It's important for people to understand that Tourette Syndrome is not just about swearing or tics. It is a condition that a lot of people associate with swearing but it is so much more than that. Only 20 % of those affected by Tourettes swear. Over 80 % of those with TS have associated conditions such as Obsessive Compulsive Disorder, Attention Deficit Hyperactivity Disorder, Autism Spectrum Disorder, to name only a few. Tourette Syndrome is a very complex condition and the tics are only the visible tip of the iceberg. Only through greater awareness, opening discussions and education can we expect to have acceptance and understanding.


Question: How can parents teach their children about Tourette Syndrome?

Sonia Hely: Parents are teachers to their children and through discussing the condition with them, they are educating their children. Parents have a responsibility to teach children empathy and understanding, through their own words and actions. What we ask parents to do is start having discussions with children from a young age will encourage empathy and build understanding of the diversity in our society.


Question: How do you describe Tourette Syndrome?

Sonia Hely: Tourette Syndrome is a neurological disorder that affects 1 in 100 Australians. TS is characterised by rapid, repetitive and involuntary muscle movements and vocalisations called "tics". The term "involuntary", used to describe tics is a source of confusion since it is known that most people with TS do have some control over their symptoms. What is often not recognised is that the control which can be exerted, from seconds to hours at a time, only delays more sever outbursts of symptoms. Tics are experienced as a build-up of tension, are irresistible and eventually must be performed. Typically tics increase as a result of tension or stress and decrease with relaxation or concentration on an absorbing task. TS symptoms have long been misconstrued as a sign of behavioural abnormality or "nervous habits", which they are not.


Question: What myths would you like to bust ahead of Tourette Syndrome Awareness Week?

Sonia Hely: That not all people with Tourette Syndrome swear. You can have motor tics that are as minor as a nose twitch or blinking to something that is as extreme as cartwheeling everywhere instead of walking.


Question: How does Tourette Syndrome affect your daughter Alexandra, daily?

Sonia Hely: Alexandra is affected by motor (physical) and vocal tics every day of her life. The tics increase more in times of stress, when she is under pressure and in nervous situations and also when she is relaxed and calm. In essence, the tics are always with her and are a part of her daily life.


Question: Can you tell us about the new app, TAC'TICS?


Interview by Brooke Hunter
Photo by Allen Taylor on Unsplash