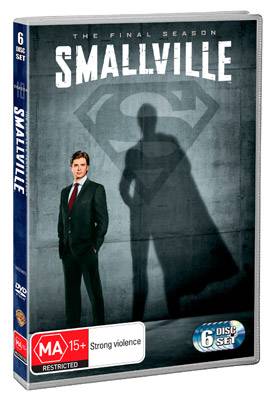 Emerging from his darkest hour, only to find the path to his destiny blocked by ghosts from the past, Clark finds himself tempted toward darkness at every turn by shadows in the present. Taking flight in its tenth and final season, this modern retelling of a hero's legendary origins continues to blend realism, action, heart and humour as Clark Kent (series star Tom Welling) soars toward claiming his birthright.

"It's been an unbelievable 10 season run for Smallville, still one of the most popular series on television and one of our best-selling titles on DVD," said Rosemary Markson, WHV Vice President, TV and Special Interest Marketing.

Special Features:
Commentaries on 2 Key Episodes
Unaired Scenes:
Back in the Jacket: A Smallville Homecoming: Creators and cast reflect on making the landmark 200th episode Homecoming
The Son Becomes The Father: How Clark and Lex's Father/Son relationships evolved over the series' 10 years.
How Do We Do music video

It's no surprise to me how popular this series is... well written, and a great cast makes for a 'must have' series that you just can't get enough of. - Editor Femail.com.au