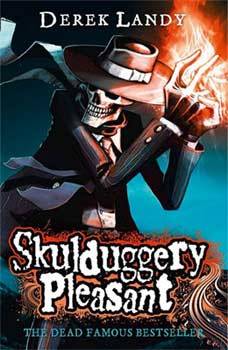 Skulduggery Pleasant
"So you won't keep anything from me again?"
He put his hand to his chest. "Cross my heart and hope to die."
"Okay then. Though you don't actually have a heart," she said.
"I know."
"And technically, you've already died."
"I know that too."
"Just so we're clear."

Stephanie's uncle Gordon is a writer of horror fiction. But when he dies and leaves her his estate, Stephanie learns that while he may have written horror, it certainly wasn't fiction.

Pursued by evil forces intent on recovering a mysterious key, Stephanie finds help from an unusual source - the wisecracking skeleton of a dead wizard.

When all hell breaks loose, it's lucky for Skulduggery that he's already dead. Though he's about to discover that being a skeleton doesn't stop you from being tortured, if the torturer is determined enough. And if there's anything Skulduggery hates, it's torture... Will evil win the day? Will Stephanie and Skulduggery stop bickering long enough to stop it? One thing's for sure: evil won't know what's hit it. 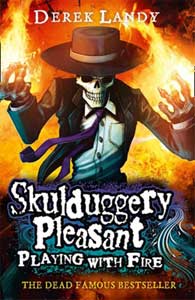 "You will kill her?" the Torment asked.
Skulduggery sagged. "Yes." He hesitated, then took his gun from his jacket. "I'm sorry, Valkyrie," he said softly.
"Don't talk to me," Valkyrie said. "Just do what you have to do."
Valkyrie parted her tunic, and Skulduggery pointed the gun at the vest beneath.
"Please forgive me," Skulduggery said, then aimed the gun at the girl and pulled the trigger.

With Serpine dead, the world is safe once more. At least, that's what Valkyrie and Skulduggery think, until the notorious Baron Vengeous makes a bloody escape from prison, and dead bodies and vampires start showing up all over Ireland. With Baron Vengeous after the deadly armour of Lord Vile, and pretty much everyone out to kill Valkyrie, the daring detective duo face their biggest challenge yet. But what if the greatest threat to Valkyrie is just a little closer to home...? 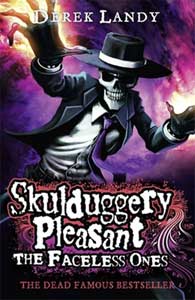 Skulduggery Pleasant: The Faceless Ones

If you haven't read the previous Skulduggery books then what are you doing reading this? Go and read them right now, so that you know what all that stuff in the previous paragraph was about.

Done? Good. So now you're on tenterhooks too, desperately awaiting the answers to all your questions, and instead you're going to have to wait to read the book. Sorry about that. 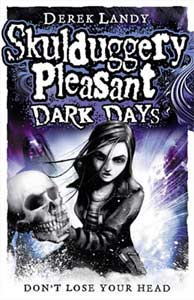 Skulduggery Pleasant is gone, sucked into a parallel dimension overrun by the Faceless Ones. If his bones haven't already been turned to dust, chances are he's insane, driven out of his mind by the horror of the ancient gods. There is no official, Sanctuary-approved rescue mission. There is no official plan to save him.

But Valkyrie's never had much time for plans.

The problem is, even if she can get Skulduggery back, there might not be much left for him to return to. There's a gang of villains bent on destroying the Sanctuary, there are some very powerful people who want Valkyrie dead, and as if all that wasn't enough it looks very likely that a sorcerer named Darquesse is going to kill the world and everyone on it.

Skulduggery is gone. All our hopes rest with Valkyrie. The world's weight is on her shoulders, and its fate is in her hands.

These are dark days indeed. 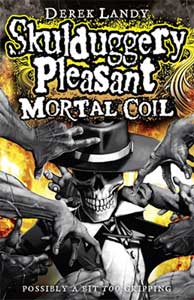 Skulduggery Pleasant is back, and reunited with his original head. But all is not well in the magical world - for one thing, foreign powers are conspiring to take over the Irish Sanctuary, and for another thing, Valkyrie has discovered she might be the sorceress set to destroy the world. The problem is, she doesn't feel she can tell Skulduggery what she's learned... and that's how all the trouble starts.

With Valkyrie on a quest of her own, to seal her name and prevent her evil destiny from coming to pass, Skulduggery and the gang are even more vulnerable. Which is a shame, because remember those thousands of remnants, imprisoned in the Midnight Hotel? Well, now they're out. Not only that but they believe Valkyrie is their messiah. And that means thousands of wicked souls, desperate to get to Valkyrie, willing to kill anyone in their way... Oh, and because they can possess any body, they could be ANYONE.

Now Skulduggery, Valkyrie, Ghastly and Tanith can trust no one. Not even each other... 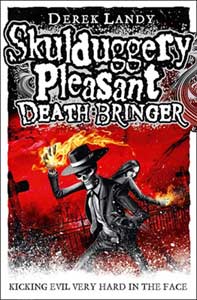 The bestselling 6th book in the series out now in paperback, and in a brand new cover look - featuring all new updated artwork from the hardback! DEATH BRINGER TCM'd over 60,000 copies in hardback, and it's sure to fly in paperback too...

The Necromancers no longer need Valkyrie to be their Death Bringer, and that's a Good Thing.

There's just one catch. There's a reason the Necromancers don't need her any more - because they've found their Death Bringer already, the person who will dissolve the doors between life and death. 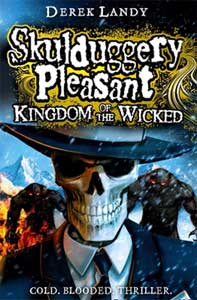 Skulduggery Pleasant: Kingdom of the Wicked

DEATH BRINGER, book 6 in the Skulduggery Pleasant series, was the number-one bestselling children's book for two weeks running in September 2011, as well as outselling the number one adult fiction hardback.

And guess what? This one is going to be EVEN BIGGER. Hot on the heels of World Book Day, when 250,000 copies of Derek's one-off novelette will be distributed, everyone will be a Skulduggery fan in 2012 - and EVERYONE will want this book.

Books 1-3 were the Faceless Ones trilogy. Books 4-6 were the Necromancer trilogy. Now, get ready for... the Darquesse trilogy. Valkyrie will finally come into her destiny. The end will finally come. And the last part of your minds will be totally and utterly blown...

Derek Landy lives near Dublin. Before writing his children's story about a sharply-dressed skeleton detective, he wrote the screenplays for a zombie movie and a murderous horror film. 'I think my career-guidance teacher is spinning in her grave,' he says, 'or she would be if she were dead.'