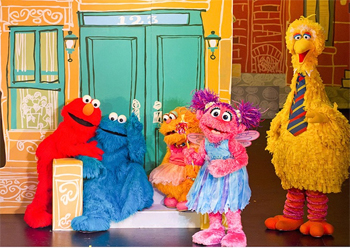 Life Like Touring and Sesame Workshop, the non-profit educational organisation behind Sesame Street, are bringing their mission of kindness to children around Australia, as their new theatrical production Sesame Street Presents Elmo's Super Fun Hero Show, continues its journey around the country. Toddlers and pre-schoolers will delight in seeing their favourite Sesame Street friends appear live on stage in what is already delighting audiences young and old!

In Sesame Street Presents Elmo's Super Fun Hero Show, Elmo and his Sesame Street friends are on a mission. Super Sparkleheart, a cheerful caped visitor, takes the friends on a joyful musical journey to discover the mysterious inner super power that will make every one of them an everyday super hero. Cookie practices sharing, Elmo cheers up The Count, Abby Cadabby and Zoe bandage Big Bird's bumps and boo-boos while Super Grover thinks all super heroes should learn to fly!

Jam-packed with super Sesame Street songs including 'Belly Breathe," 'Elmo's Ducks," 'Don't Give Up," 'Grover Can Do It" and the 'Everyday Heroes" song, this is a show for little people and their grown-ups to sing, dance and join in with, while touching on the life-lessons of co-operation, sharing and tolerance that Sesame Street has brought for more than forty-five years.

The new show is part of Sesame Street's mission to help children grow smarter, stronger and kinder. Sesame Street's loveable monsters model positive interactions and the values of inclusion, listening to, and respecting others, and being empathetic, warm, and generous, illustrating for both parents and children how to be caring and compassionate citizens.

'I'm still pinching myself that Sesame Workshop came to us to write a second live show for dedicated Australian Sesame Street fans," says Theresa Borg, writer and director of Sesame Street Presents Elmo's Super Fun Hero Show. 'It just goes to show that little dreams can turn into big realities, and we don't ever want our kids to stop dreaming!"

Sesame Street is currently celebrating its 46th season in Australia and has captured the hearts of families here since it first aired. The popular series is broadcast on ABC KIDS and is watched by half a million preschoolers every day. Hundreds of A-List celebrities have appeared on Sesame Street, including Australian celebrities Nicole Kidman, Hugh Jackman, and most recently, Jessica Mauboy.

Sesame Street has been helping kids grow smarter, stronger and kinder since 1969. Screened in over 150 countries, Sesame is a beloved household name in dozens of languages, and it means learning - and fun - in all of them. Today Sesame Workshop is a global educational force for change, with a mission to reach the world's most vulnerable children all over the world.

Tickets on sale now at www.sesamesteetpresents.com.au