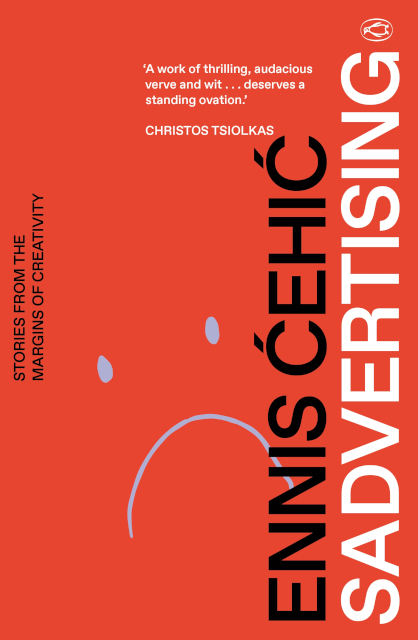 An electrifying collection of stories from the febrile imagination of a young writer who traverses culture, genre and form.

A man grows tired of his open-plan office and builds a fort made of stationery. A woman's euphoria at finally achieving Desktop Zero is quickly replaced with despair. A group of copywriters dream of being poets, and a disillusioned sales executive overthinks his think piece.

In the mind-bendingly upside-down world of Sadvertising, iPhones have feelings, brands come to life, creative directors disappear into parallel universes and lowly freelancers become immortal. It's a world where gods, ghosts and muses stalk the corridors of bland and placeless offices, and the wondrous exists alongside the mundane.

Short, punchy and direct, Ennis Cehic's satirical fables are box-fresh and shot through with pitch-black humour, existential dread and late capitalist yearning for meaning. They grapple with love and loneliness, art and commerce, dream and reality, and reflect the absurdity of the modern condition.

Sadvertising is a surreal, subversive and utterly contemporary literary debut from an unforgettable new voice.

About the author
Ennis Cehic is a writer whose work focuses on ideas of displacement, creativity and existentialism. His writing, including essays, fiction and memoir, has been published in a variety of literary journals and publications including Meanjin, Assemble Papers, Going Down Swinging and others. In 2018 Ennis was selected as an inaugural recipient of the Wheeler Centre's Next Chapter writers' scheme by judges Christos Tsiolkas, Benjamin Law, Maxine Beneba Clarke and Ellen van Neerven. He was mentored by Nam Le. He is the author of New Metonyms, a literary photography book about his homeland Bosnia & Herzegovina, released with photographer Shantanu Starick in 2020. Since 2007, Ennis has been working in the advertising industry as a copywriter, brand strategist and creative director. He lives and works between Melbourne and Sarajevo.

A fabulous collection of stories centered around the world of advertising, where the craft of writing becomes the vessel of a creative industry.  With a collection of 50 stories it may feel overwhelming, however also means you can see a variety of views and are more likely to resonate with a few.