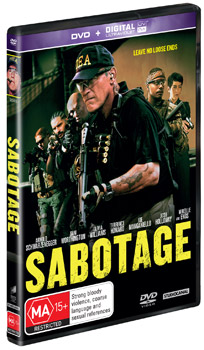 
Directed by David Ayer, the acclaimed Director of End of Watch, Sabotage follows the leader of an elite DEA task force whose members are targeted by a mysterious killer. Don't miss this hard-hitting, non-stop adventure.


DEA agent Breacher Wharton leads an elite task force on a daring high-stakes raid on a heavily-armed drug safe house owned by the world's deadliest drug cartels. The raid seems to have gone seamlessly, and the team think their work is done, until $10 million in cash disappears and everything turns deadly.


One by one, the ten agents involved begin mysteriously dying and everyone becomes a suspect, including the squad itself. As the body count begins to rise, it's up to Breacher and Brentwood to find out who's behind the chilling murders.