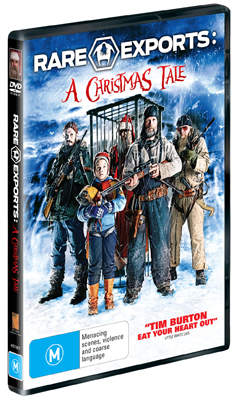 This Christmas, the REAL Santa Claus is coming to town, and he won't be bearing gifts.

On Christmas Eve in far north of Finland, a mysterious mining operation unearths an old secret buried 500 metres underground - the real Santa Claus. Soon after the discovery, strange events begin to occur. Animals are found butchered around the base of the hill and local children begin to mysteriously disappear.

The dark truth about the Santa Claus myth is finally revealed. Far from the jolly laughing man who delivers bags of goodies with happy elves to help him, the Santa of legend is just that, merely a legend. The real Santa is a monster and his elves are equally as evil.
A wildly humorous nightmare which will ensure Christmas will never be the same again.