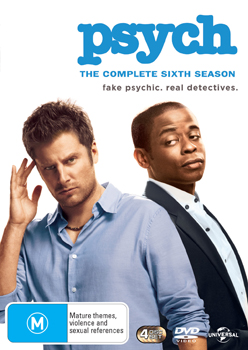 From the writer of Big Daddy, Steve Franks, comes the wild sixth season of Primetime Emmy® nominated series, Psych. The world's most dynamic and oddball detective duo, consisting of fake 'psychic detective" Shawn Spencer (James Roday) and his best bud, Burton 'Gus" Guster (Dulé Hill), go undercover, behind the scenes and over the top, to solve some of the most off the wall crimes imaginable. But how long can these super sleuths keep their psychic secret safe for?

In Season 6, the pair get more than they bargained for when they take on con artists, masked vigilantes and Darth Vader collectibles. They continue to tackle cases, which put them in increasingly strange situations, investigating a murder that appears to be perpetrated by a vampire, going undercover as a coach and mascot of a baseball team and checking into a mental hospital.

Meanwhile, Detective Lassiter (Timothy Omundson) finally learns the truth about Shawn and Juliet's relationship (Maggie Lawson) and finds a love interest of his own in the mysterious Marlowe (Kristy Swanson).

With a stellar list of high--‐profile guest stars including William Shatner (Boston Legal), Cary Elwes (The Princess Bride), Molly Ringwald (The Breakfast Club) and Danny Glover (The Lethal Weapon franchise), this totally unique and unpredictable series is guaranteed to keep you guessing 'whodunit". Relive all the laughs, thrills and mind‐boggling mysteries back‐to-back and uninterrupted in all 16 episodes, available on DVD