A report released by the Australian Institute of Health and Welfare (AIHW) for the first time presents information and statistics about breast cancer in young women aged 20–39 years.

The report, Breast Cancer In Young Women: Key facts about breast cancer in women in their 20s and 30s, was launched at Cancer Australia's annual Pink Ribbon Breakfast, in Sydney.

-In 2015, it is projected that 795 young women will be diagnosed with breast cancer, and 65 will die from it, which is an average of 2 diagnoses a day and 1 death a week,' said AIHW spokesperson Justin Harvey.

However, even for small breast cancers"which tend to be associated with more treatment options and improved survival"young women have lower survival (93%) than women aged 40 and over (99%).

Cancer Australia CEO Professor Helen Zorbas has welcomed today's report, saying -Although the number of young women diagnosed with breast cancer has increased over time, the incidence rate has remained stable over the past three decades'.

-These young women are at a life stage in which they are building careers, establishing relationships and planning for a family. Issues such as infertility, early menopause and body image as well as time away from work and family can have a substantial impact, with long term physical, psychological and social effects'.

-This report informs our understanding of the impact of breast cancer among young women at a national level, and supports our work in improving survival outcomes and addressing psychosocial issues specific to young women.'

The AIHW is a major national agency set up by the Australian Government to provide reliable, regular and relevant information and statistics on Australia's health and welfare.

Cancer Australia was established by the Australian Government to provide national leadership in cancer control, and aims to reduce the impact of cancer, address disparities and improve outcomes for people affected by cancer across the continuum of care. 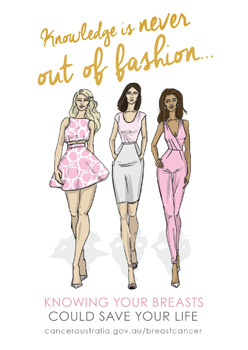 Question: Why is this the first time it presents information and statistics about breast cancer in young women aged 20–39 years?

Professor Helen Zorbas: While we have previously had information and statistics about breast cancer in young women, this is the first time all of this information has been presented together.

The Australian Institute of Health and Welfare (AIHW) report, Breast Cancer in Young Women presents the most up to date data and insights about the impact of breast cancer on young women in their 20s and 30s.


Question: What are the most important points from Breast Cancer In Young Women: Key facts about breast cancer in women in their 20s and 30s?

Professor Helen Zorbas: The report provides information on issues specific to younger women, and outlines risk factors, detection and diagnosis methods as well as key statistics, compared with women over 40.

Professor Helen Zorbas: Although relatively uncommon, breast cancer is the most commonly diagnosed cancer in women aged 20-39 years. 795 young women are expected to be diagnosed this year, an average of two diagnoses a day. This accounts for 5% of the 15,600 women diagnosed with breast cancer each year.


Question: Why is it that women in their 20s and 30s have less chance of survival than older women?

Professor Helen Zorbas: Although the survival rate for young women with breast cancer has improved from 72% in the 1980s to 88% today, young women still have a significantly lower survival rate than women 40 years and over. Breast cancers in young women tend to be larger and have pathological features which indicate that they are more aggressive.


Question: What symptoms are associated with breast cancer?

Professor Helen Zorbas: Breast changes which could indicate breast cancer include: a new lump, or lumpiness, especially if it's only in one breast; a change in the shape or size of the breast; a change to the nipple, such as crusting, ulcer, redness or inversion; a nipple discharge; a change in the skin over your breast such as redness or dimpling; or an unusual pain that doesn't go away.


Question: Can you provide a step-by-step guide to breast checks?

Professor Helen Zorbas: Breast awareness is about women getting to know what's normal for them. There is no right or wrong way, and women do not have to be an expert or use a special technique. It is important that all women to get to know the normal look and feel of their breasts as part of their routine activities, such as showering, applying body lotion or looking in the mirror.

In this way, women will be aware of any changes in their breasts, and it is important for women to see their doctor if they notice anything new or unusual for them.