'Ridiculously funny", 'refreshing", 'terrific", 'incisive", 'sweet, sharp, sad, funny and astute", 'unlike anything else", 'one of the best shows on TV" and 'the perfect coming-of-age story for people who'll never grow up". That's how critics from Entertainment Weekly to Vogue, Time, The New Yorker, The Atlantic, The Los Angeles Times, The Sydney Morning Herald and The Australian have raved about the AACTA Award-winning and Emmy Award®-nominated comedy drama Please Like Me and its creator, writer and star, Josh Thomas.

In this hilarious third season, Thomas is enchanting as always as he reprises his role of an unconventionally astute twenty-something whose blasé yet sensitive attitude to -coming out' will have you hooked from the very beginning. After coming to terms with his homosexuality whilst also supporting his bipolar mother Rose (Debra Lawrance, Home and Away, Blue Heelers) post her attempted suicide, Josh cleverly navigates this heavy content in a way that can be described as no less than authentically human.

The season starts with Josh desperately trying to court his love-interest Arnold with elaborate dates, nearly inedible vegetarian meals and grand romantic gestures. Despite this relentless attempt however, he still can't seem to win him over. Meanwhile, Arnold is preoccupied formulating a -coming-out' strategy for his charmingly wealthy parents, which does not go entirely as planned. This along with life threatening surgery, infidelities and an unforgettable family Christmas lunch are all the reasons you need to indulge in this endearingly delightful instalment of Please Like Me. Join Thomas as he navigates through a cacophony of life's most fabulous exploits and creature comforts; food, sex, drugs, dancing, singing, secrets and a transgender chicken with his trademark obscure hilarity.

With special guest appearances from Geoff Morrell (Ned Kelly, Rogue), Emily Barclay (Glitch, Suburban Mayhem) and Gina Riley (Kath & Kim, Open Slather), Please Like Me: Season 3 will take you on an emotional journey like no other.

Special Features:
13 behind the scenes featurettes 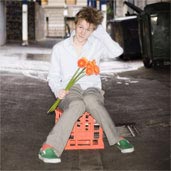