Anna grows up in a third-storey unit in Parramatta with her adoptive Russian mother Sophia. When her teacher Miss Glass gives her a Box Brownie camera, small acts of observation coupled with the art of photography become her escape. On visiting the suburb of Castle Hill with her schoolfriend Lisaveta she falls into a seductive world of gardens and orchards.

At the Thompson's place she embarks on a mission to photograph the orchard by night and day. It is there she meets Friedrich, an older man of German origin but from the Soviet Union, who lives in a shed on the property. She eventually learns that he was once a celebrated writer, his ambitions destroyed by the war.

As events unfold Anna realises that her connections to the orchard and to Friedrich are deeper than she ever could have imagined. The mysteries and secrets of the past unravel in the most shocking, tender and unexpected of ways.

Set in Sydney, and in Russia, Past Life is a glorious novel about the various ways the gifts and traumas of the past play out in the present. It is the affecting story of relationships across generations and William Lane's most hauntingly beautiful work to date.

About the author
William Lane lives in the Hunter Valley, NSW, Australia. He shares his life with his librarian partner and his three teenage children. He is the author of four other novels. His short story collection, Small Forest, was a finalist in the inaugural Carmel Bird Digital Literary Award, and was published online in 2018.

Question: What originally inspired the idea of Past Life?

William Lane: As a child I repeatedly drew battle scenes. My mum thought I was dealing with a fear of being sent to war, but I felt I was representing a conflict I had already experienced. The novel explores how we might experience things that happened before our birth – that's why it has two time frames, one in WWII in Eastern Europe, the other in Sydney in the not so distant past.


Question: How did you develop your interest in WWII?

William Lane: The effects of that war were still evident when I was a child. My parents told me stories about growing up in wartime, and some of my grandparents' generation went to the front. Even if it wasn't spoken about much, I sensed it as a massive unresolved trauma. 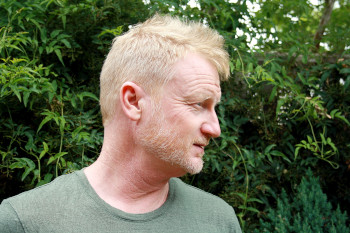 Question: What did you learn, about yourself, whilst writing Past Life?

William Lane: I learnt to be more patient. Writing this novel was like reassembling fragments of a story that had been shattered decades ago.


Question: Was it difficult reliving certain aspects/times of your life, whilst writing Past Life?

William Lane: The story feels personal, yet it deals with themes such as a love and loss that are common to everyone, so I was able to draw on the general, not only the particular. It is difficult writing about things that have hurt in some way, but if it helps to gain understanding, it's worthwhile. I suppose it's a kind of work – we have to live life going forward, but can only understand it looking back, I've heard it said.


Question: Is there a message you hope readers take from Past Life?

William Lane: It's not only about intergenerational trauma, but intergenerational healing. And if the reader can find poetry and beauty in the actual writing, then how the material is treated becomes the message. In my stories the focus is not so much on a message, as on an aesthetic.


Question: What research did you do, prior to writing Past Life?

William Lane: Not much, it really is drawn from life experience – most of the novel is set in the suburbs of Sydney, which is where I grew up. Sometimes I would find myself searching online, 'Was there a Woolworths in Parramatta in the 1950s?' or 'Did the girls high school in Parramatta have sandstone gates?' – things like that! For the scenes set in Europe during the war, I drew on histories and biographies I have read over time, but mostly so as not to make some faux pas.

William Lane: I know it's a cliché, but time really is your best friend.

William Lane: I have never forgotten the magic of suddenly being able to decipher words, and have been a keen reader ever since. Libraries have always been a retreat for me – I was the kid who sat and read in the library at lunch. I relished writing stories as a child, and have one of my first, a very feisty piece from Year Three that describes my siblings, neighbours and pets, most of them dismissed as 'pests'.

William Lane: I have a collection of short stories titled Small Forest being published in hard copy soon. Some of its stories are related to Past Life, such as 'The Tree Line', which tells of a man recalling scenes with a lover from a past life, while doing the washing up.

When I was a child I would repeatedly draw battle scenes. My parents found long reams of butchers' paper for me to cover. This repetitive drawing of much the same thing went on for several years. My bemused parents thought I was playing out my fear of being sent to war – this was the seventies after all, the Vietnam War was still going and the Cold War had yet to end.

I always had a sense, however, that I was not drawing a war I might be sent to, but one I had already been through – if not personally, then in a broader sense, as some kind of inheritance. I wrote the novel, Past Life, to explore this sense of having experienced some large event that happened before my birth. In what sense had I experienced the things I drew?

The novel is set in two time frames, one in the Second World War in Eastern Europe, the other in Sydney in the not so distant past. In the earlier time frame, two friends, Friedrich and Julia, who have known one another since childhood, fall in love. They live in the Soviet Union in 1941. They have not long been together when Germany's invasion of the Soviet Union separates them. Friedrich survives by collaborating with the Germans, while Julia becomes a partisan, fighting the invaders. So one week Julia and Friedrich are lovers, the next they find themselves fighting on opposing sides.

Julia has a child by Friedrich, Anna, who comes to live in Australia after the war. The story of Anna's life in Australia becomes a distorted mirror to her parents' stories, lived the generation before, in another place.

The story is not all grim, as hopefully it's not only trauma we receive from the collective past. Positive things get repeated, or recycled, too. In the story, the gift of creativity re-emerges between generations. The story traces various ways that the past plays out in the present. Time, and how it is experienced, is central to Past Life. The character Anna pursues a lifelong quest to create photographic images that capture time passing.

I worked hardest on the novel's atmosphere. For me the most enduring aspect of any novel is its atmosphere. In Past Life I tried to create an atmosphere that resembles the experience of déjà vu. I want the reader to feel unsure if what's occurring in the story is happening in the present or the past. Or perhaps the events are happening in both the present and the past, to varying degrees. A sense of inhabiting two time frames at once is an increasingly large part of my lived experience. The older I get, what to do with the past becomes an ever more pressing question, because the past seems to be ever more present. I don't only mean one's personal past, but more the broader inheritance of being part of a family and a culture – a species, even. The past starts to saturate the present.

Writing Past Life was like reassembling something that had long been shattered. In writing it I learned not only a lot about narrative, but also much about myself. The novel helped me to understand the child I was. - by William Lane