Now and Then Interview 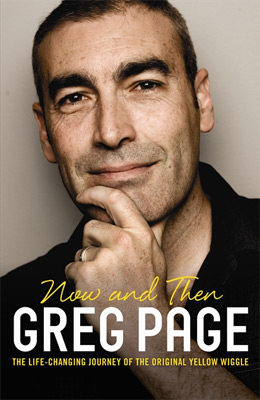 Now and Then Interview

Greg Page will always be synonymous with the children's supergroup The Wiggles, and is forever imprinted in our memory banks as the original 'Yellow Wiggle'.

Sadly, though, in 2006 Greg was forced to walk away from his stellar career‚ unable to continue because of a mystery illness. Leaving The Wiggles was a painful and life-altering decision. As a founding member he had devoted over fifteen years to their creation and had been instrumental in the group's phenomenal worldwide success.

It took years for Greg's illness - orthostatic intolerance - to be correctly diagnosed. The condition often saw him suffering from bouts of acute dizziness that left him unable to stand, speak or think without great difficulty. The lack of a diagnosis also left him suffering from depression: a frustrating and disillusioning experience for someone who had always led an active life. Now correctly diagnosed and medicated (and with a healthy dose of inspiration from Elvis), Greg is concentrating on getting back to his first love - music.

Greg Pagewas born in Sydney, Australia, in 1972. He is best-known for his role in the children's entertainment phenomenon The Wiggles. It was while attending Sydney's Macquarie University to study Early Childhood Education that he teamed up with fellow students Anthony Field and Murray Cook (they were later joined by Jeff Fatt) to form what would become one of the world's largest children's entertainment brands.

As a founding member of The Wiggles (1991), Greg travelled all over the world to entertain children in live concerts as well as recording well over 20 CDs and 22 DVDs with the group, chalking up combined sales of over 17 million units and performing to more than 4 million people in that time!

In November 2006, Greg retired from The Wiggles, physically unable to continue with their heavy touring schedule. He was later diagnosed with orthostatic intolerance, a condition of the autonomic nervous system (which regulates aspects of the body's functioning that we don't have to think about, such as blood pressure, breathing, sweating and heart rate).

Since retiring from the group, Greg has enjoyed new challenges in life, and has been awarded an Order of Australia by the Australian Governor General for his services to the arts, in particular, children's entertainment, and to a variety of charities.

Greg's pastimes include listening to music (mostly Elvis and Neil Diamond but he enjoys a variety of styles), playing cricket, researching computer technologies, and documentaries and books about ancient history.

Question: Why did you decide to write Now and Then?

As I started writing the book more became about myself and my own journey through life. I identified some personal struggles that I have had over the year particularly in terms of who Greg Page was outside of The Wiggles and that really came to the floor in the very last part of the book.


Question: How long did it take to correctly diagnose your illness?

Greg Page: I can recall having symptoms back in 1993 and going to the doctor then so about thirteen years before any of the doctors were able to get to the bottom of it. Even then it was only because the symptoms were affecting me so badly that I really needed to get it sorted out.


Question: Can you talk about how you managed your illness?

Greg Page: To be honest I think mostly it is managed because I am not trooping around the world loosing a lot of sweat, doing shows, with The Wiggles. I think what had happened was that I had become so dehydrated from loss of body fluid from sweating that I had gotten into such a bad state and to get back on the road to being well again I was on medication to help retain fluid. On a daily basis now I don't really get that many symptoms, which is great and I am aware of what the condition is and what will make the symptoms worse. For instance if I was to stand in a queue at a check out at the supermarket, if it was a really long queue and I was standing there for ten minutes, I would start to feel unwell but I would know what to do then, because I know what it is. Whereas before I was diagnosed I'd have all these symptoms and feel unwell and I wasn't sure why and I would continue to put myself in that situation, not knowing it is that situation itself that is making you feel that way.
Management of it is through knowledge.


Question: Was walking away from The Wiggles one of the hardest decisions you ever had to make?

Greg Page: I think in retrospect, yes. At the time it wasn't that hard of a decision to make because I was so unwell there was no other decision to make. At the time when I made the decision I wasn't diagnosed and I didn't know how long it would be until I would be diagnosed and I didn't know what the diagnoses may be or what the prognosis would be. It was the end of October, 2006, that I made the decision to leave the group and give them some clarity about their future in terms of would I be performing with them or would they need to replace me.

It was the best decision to make and certainly one that was more or less made for me because of the condition that I was in.


Question: How are you working on getting back into music?

Greg Page: Gradually. At the moment it is just a hobby, I am not pursuing any dreams of a career in music at the present, partly because my wife and I are expecting a baby in six weeks times and we are looking forward to that. We have had one child together, already. We have Vanessa's children Hayden and Claudia living with us now and we have Lara who is our own little effort and we are going to have a little boy, in six weeks times. In terms of my future, at the moment I am planning on being a full-time Dad.