'Idol' is the first in a series of upcoming releases from LA-based Euro-Pop artist NIKO. Inspired by wanting to be seen and heard whilst exploring the search for fame and need for love, NIKO's upbeat EDM track will have you hitting the dancefloor this Summer.

Born and raised in Milan, NIKO wants to spread his uplifting sound across the globe. His new track 'Idol' seamlessly blends together acoustic elements with textured electronic leads & thumping dance beats, whilst his elegant songwriting and captivating lyrics shine bright like the California sunshine in which he finds his inspiration.

Talking about the track, NIKO explained, "Idol is a song about wanting to be seen and heard. It is also an exploration of the concept of fame, but it mostly can be interpreted as the need for love - the desire to be somebody's somebody. Sonically, the song is influenced by 90's dance and house music, and artists like Robyn, Years & Years and Danny L Harle."

"I wrote an early version of Idol a couple years ago, but sat on it as I was trying to find the best producer that could bring my vision to life. When I connected with Joakim Buddee, listened to his productions, I knew he was the right fit. We worked on the song completely remotely; he is in Sweden and I'm in the US, and travel was restricted due to Covid. We had Zoom sessions, and went back and forth on email until we finalized the track. I recorded the vocals in a studio on Sunset Boulevard, Joakim mixed the song in his studio in Stockholm, and then we sent it for mastering in Germany. It was a great collaboration for all parties involved."

Growing up in a household where the radio was always on, his love for music was informed by icons such as Madonna, Britney Spears and George Michael. Fueled by his passion, NIKO formed a band and started performing in local venues in Milan. But it wasn't until he experienced nightlife, that he discovered a love for dance music: a new door opened, and he started working with DJs as a vocalist.

After moving to the US, NIKO launched his career as an independent artist: releasing first EP "RMNC 21" in 2019, a collection of songs inspired by love and lust. He now lives in Los Angeles where he's working on his upcoming releases. Mixing acoustic elements with electronic textures and dance beats, NIKO is crafting an uplifting soundscape inspired by European pop, immersed in the California sunshine.

With a clear path ahead of him, NIKO is an emerging artist to keep your eye on this Summer.

NIKO: If I had to use one word it would be euro pop.


Question: Can you tell us about Idol?

NIKO: Idol is a song about wanting to be seen and heard. It is also an exploration of the concept of fame, but it mostly can be interpreted as the need for love - the desire to be somebody's somebody. Sonically, the song is influenced by 90's dance and house music, and artists like Robyn, and Years & Years.


Question: Tell us about creating new music via Zoom instead of being able to travel and collab?

NIKO: This process surprised me completely! Usually when you write a song you're in the room with the producer and other songwriters - it happens fast and in a couple sessions a song is done.
br> In this case, things took a little longer, but we approached it organically. Joakim (Idol's producer) and I discussed ideas over Zoom, and then I would send melody and lyric ideas, and he would work on the production. When we both knew the song was in good shape, I recorded the final vocals in a studio in LA. Joakim mixed the song in his studio in Stockholm, and it was mastered in Germany.

Even over zoom and email, we were still able to vibe creatively and we already have other songs in the works! Of course, I'd love to do all of this in person when the world is safer but this was still an inspiring process for me. 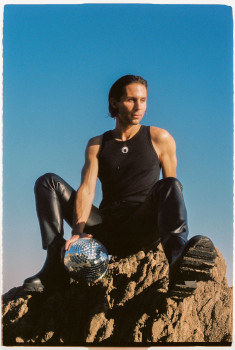 NIKO: The music that I'm making now is born from a personal need to escape everyday life, dance and feel happy. I hope listeners feel uplifted, can have fun and bust some moves to my songs.


Question: How has moving to LA influenced your music?

NIKO: LA is an entertainment capital, and a lot of creative people move here to pursue their dreams. This gives the city a very unique energy: it's a city of dreamers, where creative ideas can become reality.

That in itself is very inspiring, but I also think that the vastness of Los Angeles, the sun, and the access to nature make it a very special place.

NIKO: I would love to collaborate with Charli XCX, and Uffie.

NIKO: Music is my main form of expression, and that's my motivation. My music is the sum of all my feelings, experiences, emotions and fantasies. It's how I get all of them out in the world!

NIKO: I'm listening to Ingrid Witt, a rising Swedish pop star. And I am still not over Roisin Murphy's latest album, "Roisin Machine".

NIKO: Music has been my passion for as long as I can remember. I always looked up to artists like Madonna, Janet Jackson, George Michael and Britney Spears - their albums, music videos, and performances really inspired me to turn this passion into a career.

NIKO: When I was 13 I sang "Light My Fire" by Jose Feliciano in a club in Milan during a showcase for young talent. It is still one of my favorite songs - I recorded a cover version of it for my first EP that I released in 2019.

NIKO: I would say that it's a very hard industry to break into!

NIKO: It took many years, but I am in a very good place artistically now. I feel I am honing in my craft, and I'm making the type of music I always wanted to make. There's still a lot to learn, but I feel good about my art now

NIKO: Every day is a little bit different, but I always try to meditate, exercise before I sit down to work. I realized I'm much more creative if I start the day that way.

NIKO: More music! My next single Dance Again comes out next month, and I'm working on some cool visuals for Idol. And I am really excited to perform live once things open up.