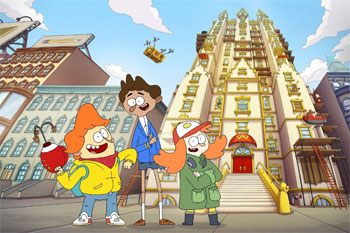 Welcome to the Wayne
Monday to Thursday from Tuesday, 21st November at 4.30pm

A brand new, animated mystery series full of kooky characters and laugh out loud jokes will premiere this month on Nickelodeon! Welcome to the Wayne is set in a quirky apartment block full of secrets, with three kids on a mission to uncover truth about where they live. Brother and sister duo Olly and Saraline Timbers, along with the help of their best friend Ansi, go on adventures inside their strange apartment building – the Wayne. The group calls themselves Team Timbers and each mystery brings them face-to-face with 'Wayne Phenomena," unlocking new information about the building.

In the first ever episode, Rise and Shine Sleepyhead, Ansi, a new resident of the Wayne, wonders whether or not he truly belongs there. He must work with Olly and Saraline to stop a rampaging threat deep within their home.

The 90-minute, live-action TV movie stars Breanna Yde (School of Rock), Casey Simpson (Nicky, Ricky, Dicky & Dawn), Russell Roberts, AJ Rivera and Klarke Pipkin. Mr. Lemoncello's biggest fan (Simpson) is chosen to be one of the first to experience the library, along with his best friend Akimi (Yde) and a number of other children. The kids must use their minds to complete riddles and collect clues that lead them out of the unique playground of imagination.

When excitement turns to jeopardy, the world of wonder begins to spiral out of control. It's up to the twelve kids to make everything right again or else they won't be the only ones escaping!

Deep down in the city of Bikini Bottom lives a square yellow sea sponge named SpongeBob SquarePants. SpongeBob lives in a pineapple with his pet snail, Gary, loves his job as a fry cook at the Krusty Krab, and has a knack for getting into trouble without really trying. When he's not getting on his cranky neighbour Squidward's nerves, SpongeBob is usually smack in the middle of a strange situation with his best starfish buddy, Patrick Star, or his thrill-seeking squirrel pal, Sandy Cheeks.

In the first new episode, Trident Trouble, SpongeBob accidentally picks up King Neptune's magical, wish-granting trident. Without realising the full potential of the royal object, there's no telling what trouble he may cause! Will the King track down SpongeBob and get his trident back?

The Dude Perfect Show
Monday to Thursday from Tuesday, 21st November at 5.30pm

It's almost summer, and what better combination is there than warm weather, outdoor sports and viral videos? The Dude Perfect Show is a brand new reality and comedy series which sees five guys pushing the limits of what is possible. Tyler, the bearded guy; Cody; the tall one; Garrett; the redhead; and Coby and Cory, the twins, will dream up high-flying sports videos in this energetic series working with celebrity guest stars.

What began as a backyard bet, has evolved into its own show and the Dude Perfect team has a job that every kid dreams of. Whether it's slam dunking into the world's biggest basketball hoop, circumnavigating a mousetrap minefield, or taking on blind trust obstacles, these guys have made a career out of having fun.

In the season premiere, the team has fun with velcro suits, looks at ways of improving dodgeball and takes on gut-wrenching trust exercises. The episode also features a guest appearance from Jack Griffo, star of the hit live-action series The Thundermans.