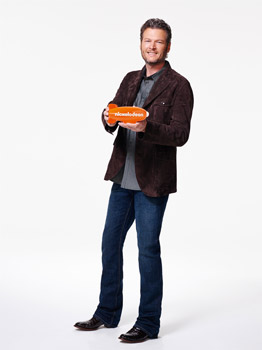 AIRS IN AUSTRALIA LIVE FROM LA – SUNDAY, 13th MARCH AT 11AM
AND PRIME-TIME AT 6PM ONLY ON NICKELODEON

Country Music superstar and coach on The Voice USA, will host Nickelodeon's 2016 Kids' Choice Awards (KCAs), with the broadcast airing LIVE on Nickelodeon, Foxtel Channel 701 on Sunday, March 13th 2016 at 11am and then prime-time at 6pm.

Super-sized surprises will take over this year's Kids' Choice Awards honouring favourites from the worlds of film, music, and television and giving kids a front-row seat to slime, stunts and celebrities. The show will be seen by kids around the globe on Nickelodeon channels in more than 180+ countries and territories. Additional Kids' Choice Awards news will be announced in the coming months.

'I've been on countless stages throughout my life, but none have promised the madness, excitement and endless slime as Nick's Kids' Choice Awards, which is undoubtedly the ultimate party for kids.  There is only one team here, and it's Team Kids Choice so bring it on Nickelodeon!" said Blake.

Voting for the 2016 KCAs will span six continents, giving kids practically everywhere the chance to have their say. Aussie kids will not only get to vote for global nominees (to be announced soon), but will also be able to vote for local stars in local categories that they deem worthy of a coveted orange blimp.

Nick fans can get in on the slime online from today, by logging on to kca.nickelodeon.com.au. Late February, the complete Kids' Choice Awards digital experience will launch across desktop and mobile devices and leading up to the event, fans will be able to watch wacky videos, play KCA-themed games, and get constant updates on the mess-fest to come.