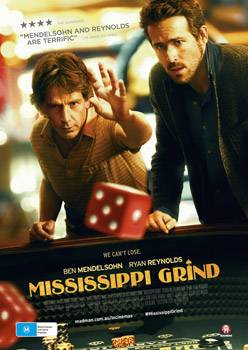 Synopsis: In this lively, freewheeling road movie, Ben Mendelsohn plays Gerry, a talented but down-on-his-luck gambler whose fortunes begins to change when he meets Curtis (Ryan Reynolds), a younger, highly charismatic poker player. The two strike up an immediate friendship and Gerry quickly persuades his new friend to accompany him on a road trip to a legendary high stakes poker game in New Orleans. As they make their way down the Mississippi River, Gerry and Curtis manage to find themselves in just about every bar, racetrack, casino, and pool hall they can find, experiencing both incredible highs and dispiriting lows, but ultimately forging a deep and genuine bond that will stay with them long after their adventure is over.

Co-starring Sienna Miller and from the directors of Half Nelson, Mississippi Grind is a film about friendship, family and the paths we sometimes unexpectedly find ourselves on.

It's hard for us to believe, but it was over ten years ago now that we brought a film to Sundance for the first time. It is the place where we made our initial tentative steps into this film world, first with our shorts, then later on with our first feature Half Nelson. Every time we've traveled to the festival, we've come back inspired by some new film or filmmaker, encouraged to keep at it. That is way we feel that it is really meaningful to be back at the fest with Mississippi Grind. It's a movie inspired by the films that got us excited about filmmaking in the first place.

Mississippi Grind was absolutely inspired by those great films from the 70s "Five Easy Pieces, Scarecrow, The Last Detail, California Split, Midnight Cowboy… These are the movies that we first discovered together when we were just starting to think about making films. At the time that we began writing Mississippi Grind, we had been struggling to get another film made" a sprawling New York ensemble drama, which proved challenging to pull together with so many moving pieces and key roles to cast. So out of the frustration of trying to get that film off the ground, we went back to those movies from the 70s. Like comfort food. And we decided, let's write a movie that captures that kind of fun, loose spirit… something that we can make on a dime if we have to. So we took a road trip from Iowa to New Orleans, just like our characters do, and the writing came out of being inspired by the places and people we met along the way. Like some of the other films we have done, this film is interested in flawed characters trying to do better. But in Mississippi Grind, the characters' journey embraces a certain magic in the world that none of our other films have really explored.

In Mississippi Grind, Gerry is an out of luck gambler and poker player who is just about at the end of his rope when he meets this charming, dynamic free spirit. He immediately sees something almost magical in Curtis and decides this guy is his lucky charm. So their relationship starts off like that… two boys who like playing in the sandbox together. Of course as they get to know each other, things get more complicated and they stop playing so nice. But there's a real affection between them, which both characters seem to need.

We found such great talent to step into these roles. Ryan Reynolds shares a lot of the qualities that we were looking for in the character, Curtis "he has a natural charm and charisma that almost feels of another era. When we sat down with him, he reminded us of a young Chevy Chase circa Foul Play and Caddyshack. We were excited to bring that part of his personality into the film. Ben Mendelsohn is one of those actors who wows you in all of his roles. From Animal Kingdom to A Place Beyond the Pines to Starred Up to Killing Them Softly"he's infinitely watchable. We were excited to see Ben's softer side in a role that might not be otherwise be perceived as sympathetic. Also, we've been fans of Sienna Miller for a long time now. She's sexy and smart, quick as a whip… We wanted to feel all of that in

Simone. Someone who allows herself to be vulnerable but never victimized. Someone who takes ownership over who she is and where she's at. Lastly, Annaleigh Tipton emanates a sincerity and bald honesty that is impossible to fake. We wanted that for Vanessa"someone who has no walls or even screens between what's inside and what's expressed on the outside. This is a young woman who says it all on her face. And it's this quality that disarms Gerry completely, brings out a side of him that we haven't seen before and might not see again…

It was really important to us that we film this kind of a movie in real locations, rather than on sets. We really wanted to feel the change of setting as our characters traveled from Iowa, through St. Louis, Memphis, Mississippi and all the way to New Orleans. It was a challenge to make sure that we traveled to film in all those locations. Our production team worked hard to enable us the flexibility to bring a reduced unit on a tour up and down the Mississippi River. Also, we weren't so interested in the gambling landscapes that you usually see on film"primarily Las Vegas or Atlantic City. There's this whole world of smaller casinos that dot the middle of the country, which are wildly different from what's usually pictured in gambling films, but equally if not more intriguing to us. We wanted to take our audience on a journey to these locations that maybe aren't as familiar, let them travel with our characters as they make their way through these smaller, grittier, more textured spaces.

In the end, we hope to take our audience on this journey with our characters… to experience their highs and lows as they gamble their way down the Mississippi River. We want our audience to be surprised by what it finds in both the journey and the characters themselves. Ideally, watching a movie should be an experience… one that expands as audiences continue to think and talk about the film after it ends... but what specifically they come away feeling or thinking can and should be different for each viewer. 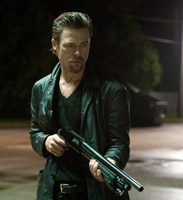 Killing Them Softly, When their illegal card game is held up, and the life blood of the criminal economy is on...

Ned Kendall returns to his isolated family home to say goodbye to his dying father, but memories of his...

Turbo is a little guy with big dreams. Not satisfied with living life at a snail's pace, he has a powerful and...