The world is a crazy place at the moment…

What do a former UN-worker (Des) and a journalist (Lou) do when they become disenfranchised with the world around them? Start a band, that's what!

Conceived whilst living through the military coup in Bangkok in 2014 Miles Recommends is the brain-child of singer/songwriting and production duo Des Atkinson and Lou Cadell.

Taking their moniker from their childhood video store clerk, Des and Lou (like the movies Miles recommended) defy genres through invoking a critical spirit in dissecting the social norms of today.

The new single 'You're Never Alone' came about from watching the world happily skip into the anthropocene as vested interests continue to distort democratic institutions. Yet despite having the weight of the world's problems on your shoulders, and knowing there's no promise for a brighter future, it's important to remember that, 'You're Never Alone'.

"The world is a crazy place at the moment and it's hard not to feel disheartened and anxious about what's happening. Climate change, the growing global disparity between the rich and poor, the weakening of democratic institutions, mass pollution – it's overwhelming. You're Never Alone Is that voice that says 'I'm overwhelmed too, and whilst I can't make it better for you, I am here with you.'" - Lou Cadell (vocals)

With a pulsating urgency guided by yearning and soaring vocals, 'You're Never Alone' takes the listener on a thrilling journey into the troubling unknown. This is the first single taken from the forthcoming debut album from Miles Recommends, Keep it Warm, due for release in early 2020.

Miles Recommends previous release was their successful debut EP 'Extended Play' in 2017. This EP enjoyed airplay support via the ABC and Community radio. In fact the debut single 'Crazy House' hit #19 on 4ZZZ's Hot 100 for 2017! This coincided with them winning the National Oxjam Gig Contest 2017 and thus being sent as ambassadors to BIGSOUND 2017. Miles Recommends has now being bolstered by the Filipino rock god Ken Estioko.

Question: What inspired the track You're Never Alone?

Lou Cadell: I wrote the track for Des, who was (and still is) depressed about where things are headed globally. The world is a crazy place at the moment and it's hard not to feel disheartened and anxious - climate change, the growing global disparity between the rich and poor, the weakening of democratic institutions, mass pollution – it's overwhelming. You're Never Alone Is that voice that says 'I'm overwhelmed too, and though I can't make it better for you, I am here with you.


Question: What message do you hope listeners take from You're Never Alone?

Lou Cadell: As simple and/or cheesey as it sounds, I just want listeners to know that I'm also overwhelmed with what's happening too and that they aren't alone. Together is how we can actually start taking action and making things better.


Question: What inspired the career change from a journalist to musician?

Lou Cadell: Career as a musician? I wish! From what I can gather, the only people who have music careers that sustain themselves without a day job are those that are very famous indeed, or those who were wealthy before starting out in music. Music is my side hustle – my real "career" is as a librarian. There's not enough time for me to tell you how much I love being a librarian, and really, that's what was missing for me as a journalist. Sure, journalism was a lot of fun - interviewing bands and directors, attending premier shows and movies, etc, - but ultimately, I didn't love it. There's a lot more on offer at the table for me in terms of working in raising literacy levels and the grassroots community engagement which being a librarian offers.

Lou Cadell: I'm a fly-by-the-seat-of-my-pants kind of gal, so for me, live is where it's at.

Lou Cadell: Miles was our video store clerk growing up. He used to have this section up the back called "Miles Recommends" where he would have a random selection of movies he chose to highlight. We loved this idea and kind of stole it as our band ethos since we never wanted to stick to one genre of music. Miles Recommends is a friend suggesting things you might like and we like the freedom this band name gives us. I'm not sure if the real Miles would actually recommend us though – we used to swap his "Miles Recommends" slips out of the covers and stick them in the pornos that lined the top shelves (Sorry Miles!).

Lou Cadell: The band was all Des's idea and came about when he learnt I could sing. We were living in Bangkok at the time, at the beginning stages of the military coup, and there was a curfew in the beginning which meant we had to be home earlier (by 10pm). We were jamming more in our apartment as a result of this, with Des following me around playing guitar of ukulele until I came up with a melody. That's how it started, and how it continues to this day - with the exception of adding Ken into the fold - shredding away on guitar.

Lou Cadell: Time. Everyday I have less and less yet I realise how much more I want to do. That applies to everything though, not just music!

Lou Cadell: A lot of Motown (Otis Redding, Solomon Burke, Aretha Franklin…so many talented artists!). I am also super into American country musician Margo Price. I love a bit of country and her voice sounds so 80's/90's, which is my music match-made-in-heaven. 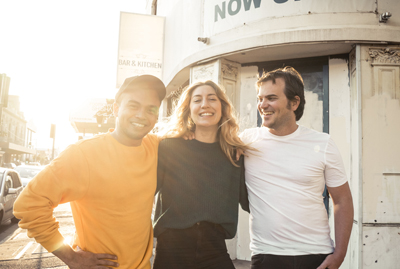 Lou Cadell: At the time we started the band, both Des and I were feeling pretty disillusioned with the world and where humanity seemed (still seems!) to be going. Music seemed like a good place to get some of our frustrations and ideas out there. We always hope our music might resonate and make someone think a little differently than they did before, or that they might hear us and think "this is how I feel too!".

Lou Cadell: Blondie. They are the coolest!

Lou Cadell: The biggest challenge for me has been the management side of things – managing all the millions of little things that need to be done on the side to make the shows and songs happen - and managing the other people in the band. Lucky for me, we've now got a pretty chilled group of people playing with us, which is great. But in the past we've had a few divas. Starting a band, I just assumed as lead singer I'd be the diva – how wrong could I be!

Lou Cadell: I typically wake up at 5:30am, meditate for 20 minutes just to centre myself before I do 60 minutes of yoga (laughs)! Usually it's: wake up already late for work, tear off to my real career as a librarian where I get to do all the epic things with people and books, and then come home and do whatever I need to music-wise. It could be going to band practice, recording vocals, helping Des (band mate, producer, general musical genius) comp tracks for songs, hitting social media, updating the website, sometimes doing interviews, writing press releases, writing new music, preparing for a show, watching videos of Tina Turner on Youtube and pretending it's "band research"… there is always something to do. Being a musician is like having a small business - there is always something more you could/should be doing.

Lou Cadell: Playing live – it's nerve-wracking and scary and fun and everything you think it'd be - no matter how small or big the stage. I read a quote once by J-Lo who said if she didn't make it she'd still be in a bar singing somewhere. I reckon it'll be the same for me!