Matt Goss is leaving Las Vegas. After 10 years, thousands of shows and hundreds of thousands of happy concert-goers, the British musical legend has decided to return to the UK to where it all began and is set to release an incredible new single, 'Somewhere to Fall' which has been serviced to radio in Australia.

'Somewhere To Fall' is the first taste of new music from the pop icon and acts as the curtain-raiser to his forthcoming studio album 'The Beautiful Unknown', which is slated for release towards the end of the year.

'Somewhere To Fall' bears all the markings of a true Matt Goss classic with the star's unmistakable vocal adding raw energy as it soars throughout, creating euphoric pop perfection. The track's powerful, emotive lyrical impact is woven against modern, contemporary production that feels instantly anthemic and uplifting. This is a song that existing and new fans alike are going to rejoice in. 'Somewhere To Fall' marks a return to a genre that made Goss a household name and is a power pop anthem that feels like a hit single in waiting.

Matt explains; "With 'Somewhere to Fall', I wanted to write an intelligent pop song, and I've disguised quite a heavy lyric within a joyous pop song. 'Somewhere to Fall' is about finding a safe place to rest our strength. That might be with a partner, in your home, a park bench, I don't know where it is. But it's somewhere for you."

It was 6 months into the pandemic that realisation eventually pushed Goss back to his first love: songwriting. This next chapter sees Goss baring his soul for the world to see as well as emerging from a turbulent year stronger and more determined than ever before.

Early on Matt had a title for this new collection of songs that were pouring out of him – 'The Beautiful Unknown' was a phrase that came from the poetry Goss likes to write away from his musical projects. Explaining the phrase, he says: "We have been conditioned to fear tomorrow, to fear next week, to be fearful of next year certainly. Because there is this unknown energy around all of us – no time more than now. And I've been through the ringer during Covid, betrayed by some people, uplifted by others. So,' The Beautiful Unknown' is a request to people to come along with this philosophy that tomorrow is going to be a good day and a good place."

Produced at the storied Record Plant in LA, with additional recording in Nashville, 'The Beautiful Unknown' is the album Matt Goss needed to make now.

"I wrote this song called 'Shipwreck' at 3am. It's a song about not wanting to give up, about feeling broken, the analogy of a shipwreck underwater, the image of everything being slowly dismantled by the tide. And I kept writing the next night, and then I called Babyface. And him being a wonderful human being said he loved it and that I should come to his studio in LA and record it."

That note of encouragement from Kenneth "Babyface" Edmonds, one of the all-time great producers, un-stoppered a new burst of creativity for Matt Goss. He also began collaborating with Jacob Bunton, the Emmy-winning songwriter and multi-instrumentalist who's worked with everyone from Mariah Carey to Steven Tyler, Smokey Robinson to Akon.

Goss will still be based some of the time in Los Angeles, his home (alongside Las Vegas) for almost three decades. But his focus looking ahead is more on working and performing in the UK and around the world with Australia at the top of his list. The UK is the place that rocket-powered the teenage Goss to the top of the charts, cultural phenomenon status and a headline gig at Wembley Stadium – a feat that made Goss the youngest male ever to headline the legendary venue and perform to over 77,000 fans, a record he still holds today.

"I want to go back to my people and to my world," he concludes. "I have to get back to pop. I'm so happy to say I've fallen back in love with pop music, and the power of pop music. There's no hiding that on this record."


Question: Can you tell us the story behind Somewhere To Fall?

Matt Goss: During these times we have all been through a great deal and I found myself feeling strong but needing a place to rest my strength and in turn needing a safe place to fall to do that. Resting your strength is not weak, it comes from the deep fortitude that knows you'll never give up. But just like anything, a recharge is essential when you are on a beloved journey that by definition cannot be brought to fruition because that journey is called life.


Question: How has Las Vegas influenced your music? 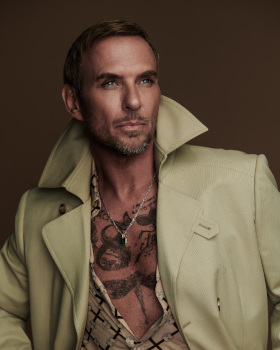 Matt Goss: I think both go hand in hand because when you're recording you always get a feeling about how it's going to translate to a live audience. There's an intense synergy that exists in both places that become each other's driving force.

Matt Goss: The main thing I want from my music is a sense of inclusion that will resonate within all of our crazy but wonderful lives and to simply trust The Beautiful Unknown.

Matt Goss: I have a tattoo that says, "Never waste good agony." That pretty much sums it up but I'm driven by the truth within my life even when I create a story in a song that usually is based on some kind of reality that I've experienced.

Matt Goss: I had a drama teacher named Jane Roberts that pretty much instilled within me that I could achieve anything I wanted to. I originally wanted to be an actor, but after singing the lead in the musical "Cabaret" I realized how beautiful singing felt and it seemed that people liked my voice. The connection that a lyric and melody can create with an audience, for me, is second to none.

Matt Goss: Adele. I love her voice and I love her sense of melody. It would be great to do a powerful ballad with her.


Question: Did you imagine you would still have an established career all these years after the Bros era?

Matt Goss: All I can say is I truly hoped that I would.

Matt Goss: Yes, only once and that was after my Mum died. It's not something I'm proud of, but I contemplated giving up entirely. But that would have gone against everything that she taught me. But, I definitely had to take a deep breath to realize that was the very thing I needed, a deep breath.

Matt Goss: My favourite thing about being a musician is the ability to transport an audience into another place where they don't worry about their bills or their worries or their fears. We have a mutually immersive state where we all feel that everything is going to be ok.


Question: You are in London currently, what's a typical day like?

Matt Goss: I have currently just finished 9 interviews. It is 2am in the morning and I have 7 more at 6am. But I'll still find time to do 1 TV today and maybe feed the birds at St. James Park. I will probably do 30 selfies with strangers and the same number in conversations. I'm a lucky man.


Question: Outside of music, what other passions do you have?

Matt Goss: My dream is to be a fashion designer where I can have a lifestyle brand. I love to collect watches and I love to paint and draw. I also feel like poetry is a constant part of my life.


Question: What's next for you? Are you planning on coming back to Australia?

Matt Goss: Australia has become a place that I have to go back to. It is responsible for some of the greatest memories of my life. The way that your country welcomed me, felt comparable to the welcome of family. I'll see you soon.