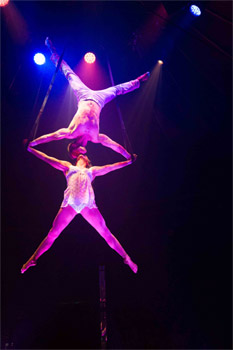 Spiegelworld has arrived in Australia and the team is busy preparing for the opening of its smash-hit Las Vegas show Absinthe, a follow-up to its record-breaking show EMPIRE which was seen by an incredible 200,000 Australians.

The Australian tour of Absinthe is presented by Stan, with the Melbourne season opening on March 21 2015under the beautiful spiegeltent on the rooftop at Crown Melbourne.

Inspired by the absinthe-drenched cabarets of late 19th century Europe, Absinthe is an adult-themed cocktail of circus, comedy, burlesque and vaudeville for a 21st century audience. In Las Vegas, the show has been playing to sold-out audiences at the world's most famous casino, Caesars Palace, since 2011 and celebrates its fourth anniversary in April. Celebrities regularly flock to join the audience and have recently included Britney Spears, James Franco, Neil Patrick Harris and Olivia Newton-John.

Absinthe is hosted by the filthy rich and just plain filthy Gazillionaire and his loyal assistant Penny Pibbets who have become two of the most acclaimed and subversive comedy forces in Las Vegas in recent years. Intoxicating songs are performed live by the seductive sylph, The Green Fairy.

Melbourne audiences at Absinthe will be treated to three new international acts, specially hand-picked for the Australian tour, which will join the show's line-up of jaw-dropping acts which have been wowing Las Vegas crowds. Angie Sylvia from Sweden will perform a dangerous Fire Burlesque act that has never before been performed in Absinthe. She will also present the famous Balloon Strip, handed down to her by New York burlesque legend, Julie Atlas Muz, a star of the original production of Absinthe. Last year Angie was a featured artist in Spiegelworld's acclaimed production Vegas Nocturne at The Cosmopolitan of Las Vegas.

The Birdcage Ladies, Laura von Bongard and Luka Clayburn from Germany, have created a breathtakingly sexy aerial hoop duet which will have its world premiere in Newcastle. Los Dos Tacos (Andrei Sizonenka and Aliasandra Yurkavets from Belarus) will astound audiences with their heart-stopping human foosball routine on the high bar. It is believed to be the first time a double Horizontal Bar act has been performed on the intimate spiegeltent stage where the audience are just inches away from the action.

Other acts include Oleksandr Volohdn (Ukraine) building an impossibly high chair mountain; The Lost Souls (Ukraine) with their stunning acrobatic Banquine Act; the sensuous Jacob Oberman and Maika Isogawa (USA) on the Duo Straps; Michael Nowosadko and Zbigniew Sobierakski (Poland) displaying extraordinary grace and strength with their Hand Balance; and The Frat Pack (USA) on the daring High Wire.

Spiegelword's Impresario Ross Mollison said, 'Absinthe is a rare opportunity to see these kinds of extreme circus acts performed in an intimate environment by some of the world's most sexy and talented artists. The audience is so close to the action in the spiegeltent you can see the muscles rippling and hear the heavy breaths."

Nine Live CEO Geoff Jones said, 'After experiencing the thrill of Absinthe in Las Vegas we knew we had to tour this hilarious and exciting show in Australia. I'm sure that Melbourne audiences are going to absolutely love Absinthe!'

Spiegelworld began creating its immersive live entertainment experiences in New York City in 2006. At the core of this seductive carnival world is a unique venue – a century-old Belgian spiegeltent beautifully crafted from teak, stained glass, mirrors and luxurious velvet. The tiny circular stage at the centre of the intimate spiegeltent has informed the creation of all of Spiegelworld's ground-breaking live shows.

Following the Melbourne season, Absinthe will travel to Brisbane, Perth and Sydney with other dates to be announced.

For information on the Absinthe Australian tour please visit www.absintheaustralia.com

Tickets:
Tuesday/Wednesday/Thursday: $54.00-$134.00
Friday/Saturday/Sunday: $64.00- $154.00
Bookings: www.ticketek.com.au
Show duration: 90 minutes with no interval
Absinthe is recommended for ages 15 and above. The performance features some nudity and strong language. 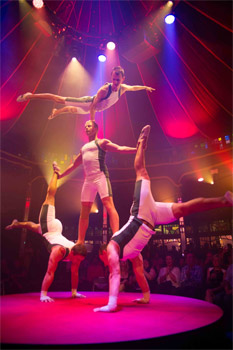 Jacob Oberman was born and raised in Saint Paul, Minnesota. There he attended the circus school Circus Juventas. Throughout his more advanced years he starred as Prince Charming, Black Bart and The Wizard of Oz. He performed numerous acts including Russian Bar, High Wire and his personal favourite, Aerial Straps. After high school, he moved to Montana to pursue skiing, ice climbing and a degree in civil engineering. Jake is excited to leave the cold weather behind as he travels to Australia with Spiegelworld's Absinthe.

Maika Isogawa was a student at Circus Juventas for eight years, training in skills including straps, aerial silks, and teeterboard. She has performed in multiple productions, not only as a circus artist, but also as a dancer and actress. After graduating high school, she attended Stanford University in California to pursue a degree in science and engineering. Always up for an adventure, Maika is now taking a leave of absence from academics to pursue performing duo straps in Spiegelworld's Absinthe Australian tour.


Question: What should audiences expect from Absinthe by Speigelworld?

Maika Isogawa: Audiences should expect to be transported to a world of circus, burlesque, and comedy. The intimate Spiegeltent (The front row is just centimeters from the stage!) allows for a unique opportunity to see the acts up-close and personal. Be prepared to watch every muscle ripple on the sexy, talented acrobats as they fly through the air.


Question: Can you talk about your role in the show?

Maika Isogawa: I'm one half of the duo straps act in Absinthe, which is my main role in the show. I also assist with the transitions of other acts.


Question: What is -Duo Straps'?

Maika Isogawa: Duo straps is an aerial routine that I perform with Jacob Oberman. It uses technically difficult acrobatic skills to tell a love story. Jacob and I have a lot of trust in each other as we hang from one another in the air.

Maika Isogawa: Although the entire pre-show prep (such as doing hair and make-up, stretching) is part of my ritual, I have a few others as well. One is right after the house opens, when I have a solo dance party to get myself pumped for the show. My favorite ritual is fist bumping the Ukrainian acrobats before the finale.

The most important ritual is right before our act, when Jacob and I are standing by the wire pedestal at the front of the house. This is our time to do any last-minute shoulder stretching before spraying our wrists with rosin and wrapping up in the straps.


Question: How difficult was it for you to leave Stanford University for this role in Absinthe by Speigelworld?

Maika Isogawa: Very difficult. Performing circus professionally had always been a dream of mine. But after being accepted to Stanford University, I decided to focus on my academics, and was looking forward to a scholarly future. I had only finished two months of my first year in college when I got the call for the role in Absinthe. I was thrilled at first, but then reality set in as my parents reminded me what a risk it was to leave school for the circus.

It was a chance that I decided to take, and I am thrilled with my decision. I just turned 18, and while my body is still young and able, I am living my dream of being a professional circus performer. College will always be there, and this was a once-in-a-lifetime opportunity that I could not refuse.


Question: What was it like to train at Circus Juventas for eight years?

Maika Isogawa: Circus Juventas is a performing arts youth circus school in Saint Paul, Minnesota. The community there quickly became my second family. I tried practically every act they offered, and trained there six days a week. Circus Juventas offers so many opportunities beyond just learning circus acts. Students at Circus Juventas get to train with world-class coaches, take workshops with brilliant guest artists and choreographers, and perform in two annual productions. Beyond that, I coached younger students, worked as a counsellor at the summer camp, and had the opportunity to perform at many private events.

My training at Circus Juventas gave me the abilities and connections I needed to be a part of Absinthe. It has also had a large part in molding who I am as a person.


Question: Can you talk about the different techniques you specialise in?

Maika Isogawa: Besides the Duo Straps act that I perform in Absinthe, I have been trained in many other circus disciplines. Some of my favorites are the aerial silk, handstands, and teeterboard. Having training in both aerial and acrobatic acts has helped me to become a more well-rounded artist.


Question: What's the best thing about travelling with Absinthe by Speigelworld?

Maika Isogawa: Traveling with Absinthe by Spiegelworld gives me the opportunity to explore, while providing a close family-unit. I love to travel and discover new cities, and traveling with Absinthe is perfect for that. If I ever feel uneasy or overwhelmed, there is always someone from the cast or crew that I can talk to. It is a pleasure working with the show and company.


Question: Can you talk about your daily training routines?

Maika Isogawa: I have straps training about three times a week, in the Absinthe tent. During that time, Jacob Oberman and I run tricks and transitions that we feel could be improved from the previous show. If we have extra time, we work on elements that aren't part of the act, that we'd like to improve on. I try to go to the gym a couple times a week to do cardio and abs. Other than that, eating healthy and staying hydrated is extremely important to maintain our bodies.


Question: What are you enjoying most about Australia?

Maika Isogawa: The coffee. I don't know why the coffee here is so much better than anywhere else, but it is going to be difficult to go back to any other coffee. Also, the people are so friendly!