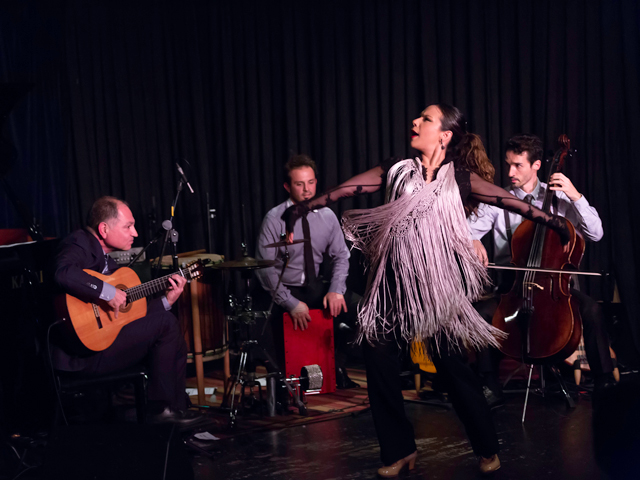 Last year marked 15 years as a performing and recording entity, and the release of their long awaited third album Sofia's Dream. With a new line-up that includes Byron Mark (cajon and percussion) and dancer Chachy Peñalver, founder and director of Sydney Flamenco School, the group are taking Australia by storm with their fresh contemporary take on Flamenco Music.

The group will perform a string of dates throughout August this year, before hitting the road for Musica Viva Australia which will take them to regional centres of New South Wales.

"This new trio musical lineup is very much about playful interaction on stage and in the studio," says Damian. "Greg and I are best friends and we have a deep musical connection. With the addition of Byron on percussion and piano, we now have a versatile and colourful trio who can partake in a huge scope of musical options. We have a greater component of improvisation incorporated into our performance compared to previous years, and of course compositions that we strive to make as widely emotive as possible. I am thrilled with this new format."

"Our incredible dancer Chachy is touring with us for the live shows," adds Damian. "Her sensitivity, virtuosity and choreographic detail to our music is extraordinary. While our music is rooted in the soul of flamenco, we are happy to take the music in any direction that deeply reaches the heart. Our main objective is to make people laugh and cry in the same night and be left with a sense of something special."

The group's first CD snared them the Best World Music Artist at the MusicOz Awards. And performances at WOMADAdelaide, Sydney Festival, Apollo Bay Music Festival, Sydney Opera House, International Australian Festival of Chamber, followed. The second CD Absolución, was launched at the Sydney Opera House in 2011 to a sell out audience and also enjoyed rave reviews.

"I am excited to be unleashing not only the ensemble's new wave of original music in a third album but also the leanness and meanness of the new line up,"says Greg Alfonzetti. "The music on Sofia's Dream is beautiful and haunting but also humorous and joyful, connected with the depth of memory and ancient longing. In our unwavering and long standing artistic collaboration over so many years since the genesis of the ensemble, Damian and I have travelled great distances, landing heart and mind in the exotic world of these new creations."
http://arrebatoensemble.com/

Arrebato Ensemble: I would describe it as emotive melodic instrumental music, based in flamenco rhythms, and written from the heart in a way that supports us all to laugh and cry, sometimes at the same time!


Question: What inspired the album?

Arrebato Ensemble: For this particular album, the pieces I composed were inspired by my 13-year-old daughter, and the pure wisdom that children can display in those wonderfully lucid moments of insight that appear from them out of the blue. My co-writer and fellow guitarist Greg was mainly inspired by the concept of sanctuary, and the paradox of the human condition.

Arrebato Ensemble: The title track on our latest album "Sofia's Dream" is really fun and uplifting to play and always entertaining for the audience, so I love performing that. Another favourite is the closing track "Drowning Ears" which often leaves people stunned and really seems to reach their hearts, especially with the addition of our dancer Chachy's choreography, and featuring our percussionist Byron on piano.

Arrebato Ensemble: My favourite would be a random person who discovered us by reading about us here! I do love when people I've never met come up to chat about how they experienced the music.

Arrebato Ensemble: I love both equally, for different reasons. All our music is original, so the recording studio is a place to be introspective and discover and develop unexpected gems of musical beauty, which is very exciting. Playing live is a place to form a sort of collaboration between the musicians and the audience of a shared emotional journey, and the feeling of that connection is very rewarding.

Arrebato Ensemble: The element of surprise. It's when an unexpected musical idea pops into your hands that sounds and feels unlike anything else you've written previously, but still creates a rush to the heart.

Arrebato Ensemble: My daughter is playing a lot of K-pop when we are driving, so I'm hearing a lot of the groups BTS and EXO! The production values and energy level are amazing and I'm loving those tunes. With flamenco, my two favourite guitarists who I have on high rotation are Paco de Lucia and Vicente Amigo. I love earlier Coldplay, I listen to them a lot. Being a cellist, I love the work of the romantic composers such as Ravel and Bartok.

Arrebato Ensemble: When I was six years old, my mum taught at the Sydney Conservatorium of Music and invited a cellist to perform for a dinner party at home. His performance really inspired me. I began cello the following year.

Arrebato Ensemble: I would say in years gone by, the fear of not making a successful career as a musician, or not being good enough, were the toughest challenges. But that fear was the grit in the oyster that created the persistence for me to keep going. I definitely recommend following your heart's passion, because I found that the constant love and curiosity for something is what gave me the resilience and endurance to get through the hard times.

Arrebato Ensemble: I compose music for TV and own a music studio, so a typical day might be spent composing and recording tracks for a TV show, or collaborating with a musician for their album project. Or playing hours of guitar and working on new musical ideas for Arrebato Ensemble. Otherwise it may be packing all the instruments and gear to prepare for a soundcheck and show!