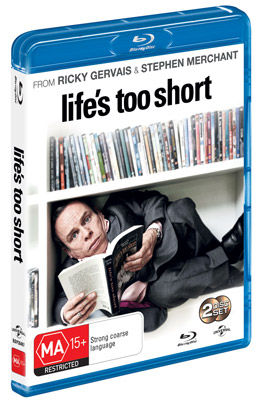 Playing an outrageous version of himself - arrogant, vain and struggling to find work, Warwick makes frequent visits to Ricky and Stephen in the hope of hustling his way back into the spotlight.

Also playing fictionalised versions of themselves, the comedy duo treats him as more of a nuisance than an acquaintance. This is not far from the real events that led to the creation of Life's Too Short with Warwick actually devising the idea for the show and taking it to Stephen and Ricky to create. Warwick owns fictional company 'Dwarves for Hire' in the series, employing an under--qualified and slightly ditzy receptionist named Cheryl (Rosamund Hanson) to log his infrequent acting jobs. Desperate to pay off a large tax bill, Warwick steals the majority of work that does come in from his clients, especially when an opportunity to star alongside Helena Bonham Carter arises.

Playing a brilliantly ghastly version of herself, Helena refuses to acknowledge Davis as a person and decides that she cannot work with him because of the way he looks.