Life Law and Not Enough Shoes 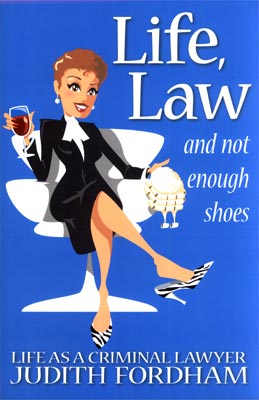 'Life Law and Not Enough Shoes' is both an intriguing tale of Judith Fordham's remarkable transition from being on welfare to success in the legal world and an expose on our jury system.

Judith has been given special permission by the WA Attorney General's office to conduct interviews with jurors about intimidation, resulting in world-first research that raises questions about the influence of the underworld in our legal system. Furthermore, Judith looks at whether juries are equipped to make decisions and judgements in today's high-tech world of DNA and other science.

Transsexuals, bikies, alleged murderers and rapists are just part of the real-life cast Judith Fordham has represented, all while raising four children by herself.

'Life Law and Not Enough Shoes' shows how one woman's determination turned her life around from cleaning houses to becoming a top barrister, Associate Professor of Forensics and having the WA Director of Public Prosecutions drinking champagne out of her shoes!

Judith Fordham has worn zebra-print shoes into a courtroom, her bold approach to life and law is inspiring, and her stories about the world of crime and justice are fascinating. From a well-known baby-shaking case to the forensic science of decomposing flesh, this is no holds barred account of crime and the law.

And then there are the shoes. In lighter moments, she tells of using a pink shoe in her early career (much to the annoyance of her then boss). Showing that Judith has managed to find fun outside the dark world of forensics and crime.

Judith Fordham is a workaholic who studied law as a single parent before establishing her own law firm and later became a barrister.

She is currently an associate professor at Murdoch University running two post-graduate courses, Forensic Science and a Certificate in Criminal Investigations or Police.