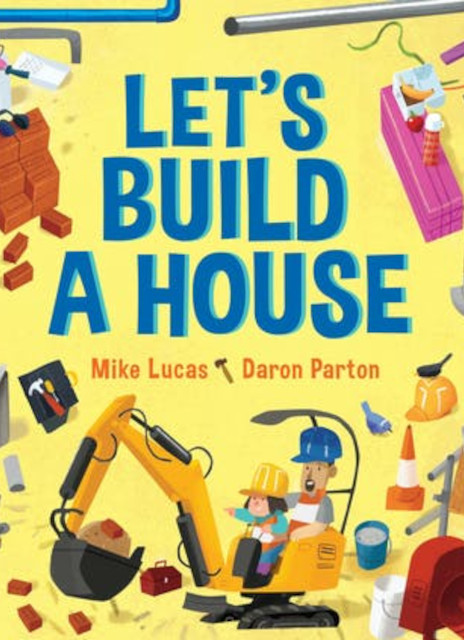 Let's build a house! But what comes first? A step-by-step look at how a house is constructed by real-life engineer Mike Lucas and gorgeously illustrated by Daron Parton.


Slip on your overalls, pop on your hard hat and jump in the digger - let's build a house!

First the floor, and then the walls,
Then the roof. Let's build it tall.
You and me - we'll build it all!
Up, up, up.

Mike Lucas has an Honours Degree in Mechanical Engineering and Masters Degree in Building Services Engineering. He works in construction for five days a week, which inspired him to write, Let's Build A House, which is a step-by-step look at how a house is constructed from digging the foundations and laying the bricks through to fitting the drains and painting the walls.

Originally from the UK, Mike Lucas moved with his family to Adelaide in 2010. He started his writing career writing funny poetry anthologies and visiting schools and libraries to encourage children to create their own silly rhymes. He has had work published in various magazines and anthologies. In 2017, Mike published his first picture book, Olivia's Voice, which became a Notable in the 2018 CBCA Awards, followed by Vanishing and Nothing's Perfect. As well as being a writer, Mike also owns a bookshop in Adelaide, Shakespeare's Bookshop in Blackwood. In 2017, he was the lead organiser of the first ever Adelaide Festival of Children's Books. For five days a week Mike works as an engineer and has very little time for sleep.

Award-winning New Zealand illustrator Daron Parton was born in the UK, married a Kiwi and moved to New Zealand in 1995. He has been working as an illustrator since 1990 and is also an illustration tutor at Auckland University of Technology. Daron's books include The Ultimate Survival Guide to Monsters Under Your Bed and A Crocodile in the Family.