Of all a woman's makeup bag favorites, mascara has to be the most irresistible – the accessory that virtually every woman uses and simply cannot do without. Almost 70% of women use it 5 days a week on average, while a third of them apply it every single day*. This daily ally is the ultimate eye-beautifier. If they could only keep one beauty tool, it would have to be mascara!

The hallmark of femininity

Mascara is the key to sparkling eyes, and its unique power stems from its truly instant results. Able to reveal your beauty in the blink of an eye, mascara is both a weapon of seduction and an object of fascination, inspiring the curiosity and desire of all. It lengthens, curls, thickens and separates lashes for widened and intensified eyes, amplifying their radiance while offering infinitely intense depth.

The eye: an asset to master

Though mascara is the best-loved and most-used of makeup products, it is also one of the trickiest to master to its fullest potential. Why? Curved and round, the eye is the most multi-dimensional facial feature, with many hard-to-reach areas. Eye experts at Lancôme have studied and theorized its complex forms during makeup workshops; they have astutely observed mascara users so as to precisely identify their difficulties and offer unprecedented solutions.

it easier to make up the eye that is on the same side as the hand that is applying the mascara. When applying to the second eye, Lancôme observed that women use three techniques, none of them entirely satisfactory:
- Crossing the brush over the nose.
- Turning the wrist to reach the eye on the other side.
- Switching to your other hand.

Issue 2: reaching all the lashes

Given the spherical shape of the eye, it combines two sets of curves to complicate access to certain areas:
o The curve of the eye contour can be broken down into three sections (the inner corner, the center and the outer corner). Viewed straight-on, two are ascending while the third is descending.
o Since the eye is round, a second set of curves is added to the first. This affects the orientation of the lashes, which point either outward (as the inner and outer corners) or forward (at the center).

Due to this combination of ascending and descending curves on the one hand, and the varying orientation of the lashes on the other, mascara application has to take two dimensions into account: the lashes of the inner and outer corners are thus especially tricky to access and coat with mascara.

Due to these two difficulties, women face the following challenges on a daily basis, which disappear when somebody else is applying their makeup:
- Achieving a symmetrical makeup result on both eyes.
- Easily accessing all lashes despite facial prominences.
- Managing to grab and coat all lashes from root to tip, even in tricky areas.

The Lancôme solution to this three-fold problem: a next-generation mascara combining a brush with high-tech bristles with a revolutionary curved stem. A daring design that inaugurates a brand new era of eye makeup.

Lancôme reinvents the very architecture of the mascara stem with the 'Swan-Neck™" wand, a patent-pending cutting-edge design. Short and twisted, it has the ideal shape effortlessly adapt to all of the eye's curves with a flick of the wrist. The Grandiôse brush is precisely positioned along the eye contour to follow the eye's natural architecture and access all the lashes from corner to corner and root to tip.

Curved at 25° to its axis, the stem also intuitively adapts to the contours of the face, avoiding the cheekbones, nose and eyebrow arch – gone are the days of wrist gymnastics for symmetrical makeup for both eyes!

With its short elastomer brush, Grandiôse allows for optimal formula adherence and glide from the very first stroke. Small in diameter, it is designed to extend and lift even the shortest lashes, creating a sensual curve and a perfectly open full and even lash fringe. Shaped like half petals, its surprising bristles allow the brush to hold the formula perfectly. They are seen in two sizes and are arranged like an open flower head, grasping and coating every lash from root to tip while ideally separating. Mascara application is precise with no smudging on the lid.

To match its exceptional wand and brush, Grandiôse needed an equally as exceptional formula. Playing on the perfect balance between color, hold and lash-care, Lancôme combines high-performance and glamour within a single ultra-black shade.

- Flexible polymers for silky long-wearing curl With its three transparent polymers (including a latex polymer) forming an invisible, supple protective film without stiffening lashes, the formula holds perfectly for a full 24 hours.

With its patent-pending wand, its contoured brush and its total-intensity pigments, Grandiôse transforms eyes for spectacular results.

From the very first stroke, it densifies the base of the lashes, coating them from root to tip. Lashes are uniformly separated and radically intensified for a captivatingly sublime look. Eyes are enhanced with divine, perfect curves. With length, curl and volume, Grandiôse completely metamorphoses eyes for beyond-stunning results!

In the end, Grandiôse invents a new perfection of makeup with an expert result in complete simplicity thanks to its smart technology. No longer need to have your makeup done professionally for perfect lashes from root to tip.

An exceptional mascara dressed in a grandiose design

Somewhere between precious accessory and arty tool, the Grandiôse bottle with its sensual, voluptuous curves is a luxurious jewel embodying a fusion of design and beauty. Dressed in a deep black, it subtly transforms into a smoky graduated effect, as avant-garde as it is mysterious.

Like a finely crafted talisman, the emblematic Lancôme rose is seen in airy, delicate form, gracefully coming to life within the semi-transparency, appearing to give rise to the stem itself.

One more Grandiôse detail: the wand's dual curve allows it to automatically mix the formula every time you open the bottle. The brush caresses the bottle's inner wall from top to bottom in a rotational movement. There is thus no 'chimney stack effect" or sensation of dryness on the brush: the formula stays fresh for easy application from the first use to the last.

On May 11th 2006, the first ever international final of the Lancôme Colour Designs Awards fashion contest took... 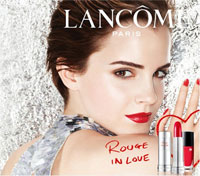 The Lancome Rouge In Love range has 21 irresistible new lipstick shades to match any hour of the day. Discover...