Jekyll and Hyde The Musical 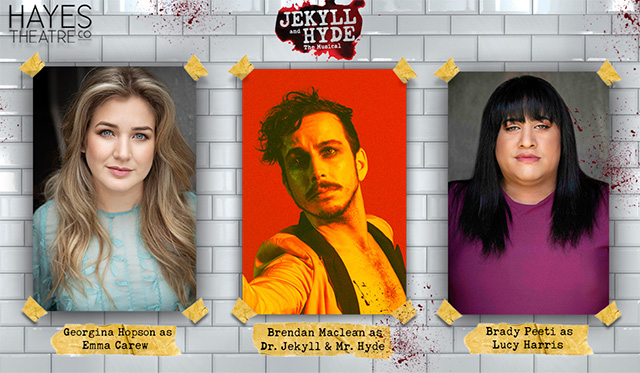 Directed by Hayden Tee and starring

Hayes Theatre Co is thrilled to announce the musical phenomenon, Jekyll & Hyde, will be presented by Hayes later this year. Directed by globally renowned performer Hayden Tee, and brought to life by a cast of 14 actors and actor/musicians, this epic struggle between good and evil will have its Australian professional premiere production at Hayes Theatre Co from 29 July with tickets on sale now at hayestheatre.com.au.

Australian singer-songwriter Brendan Maclean has been cast in the title role of Dr Jekyll and his evil alter-ego, Mr Hyde. Known internationally for his extraordinary voice and acclaimed original material, Brendan's credits include the hit-disco cabaret Velvet alongside Marcia Hines and his TV credits include the role of Eli in the ABC's F***ing Adelaide. Jekyll & Hyde marks Brendan's first foray into musical theatre. Performing the role of Lucy Harris is stage and vocal sensation Brady Peeti. A proud transgender wahine Māori and much-loved performer in the New Zealand theatre industry, Brady's theatre credits include Fever: Return of the Ula for Fine Fatale and Astroman for Auckland Theatre Company, Black Ties for ILBIJERRI Theatre Company and Te Rēhia Theatre Company and is well known for her television appearances in numerous New Zealand programs. Playing the role of Emma Carew is Australia's hottest rising musical theatre star, Georgina Hopson. Currently performing the role of Christine Daae in Opera Australia's Phantom of the Opera on Sydney Harbour, Georgina recently performed the role of Gussie in the Hayes Theatre Co production of Merrily We Roll Along for which she was nominated for a Sydney Theatre Award. The remaining cast members will be announced at a later date.

In this captivating new production, set in 1947 London, the Second World War is over, but the battle for our soul rages on inside St Jude's Military Asylum. Based on the classic story by Robert Louis Stevenson and featuring a thrilling score of pop rock hits from multi-Grammy- and Tony-nominated Frank Wildhorn and double-Oscar and Grammy-winning Leslie Bricusse, Jekyll & Hyde has mesmerised the world over.

Director Hayden Tee said, "The last time the entire human race collectively experienced a tragedy on the same scale as Covid-19 was World War Two. I am fascinated to see what the human race learns from past trauma when dealing with the imminent post pandemic mental health crisis. Therefore, by setting Jekyll & Hyde entirely in a military mental hospital the year after the allies won the war but the year before the formation of the NHS, we can examine our future through the lens of the past."

Featuring the classic songs "This is the Moment", "In His Eyes", "Someone Like You" and "A New Life" Jekyll & Hyde is the gripping tale of a brilliant mind gone horrifically awry.

Tickets for Jekyll & Hyde are available now at hayestheatre.com.au or by calling the Hayes Theatre Co box office during business hours on (02) 8065 7337.