Jasper McFlea Will Not Eat His Tea 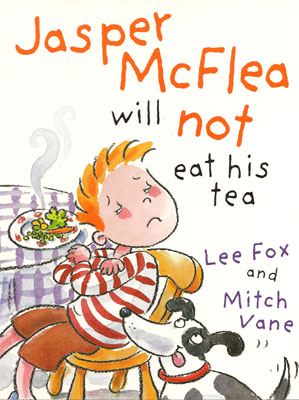 Jasper McFlea Will Not Eat His Tea

We all know that feeding kids can be quite a task sometimes! Food can end up everywhere BUT their mouths! No matter how hard everyone tries to make him eat, Jasper McFela will simply not eat his tea!

Jasper and Ginger McFlea are twin brother and sister, with wildly different tastes when it comes to food. While Ginger has hearty appetite and eats almost everything, her brother Jasper refuses to eat anything except pasta.

Jasper is also a budding cricketer and as the final match of the season gets closer, Ginger makes a dire prediction about Jasper's sporting future if he doesn't change his culinary ways...

As well as being a fantastically entertaining read-out-loud story, Jasper McFlea Will Not Eat His Tea looks at the topic of food avoidance, a common and challenging childhood issue, which many children and their parents deal with all day, everyday.

Lee Foxgrew up in the Melbourne suburb of Footscray. She has been a production assistant for a commercial radio station, a cook in a childcare centre and a store manager on a remote Aboriginal community. A mother of five children, Lee's writing career began in 2005 with several articles published in The Age. Her 2006 picture book, Ella Kazoo Will Not Brush her Hair(ill. Cathy Wilcox) was shortlisted in the Early Childhood category for the 2007 CBCA Awards, and her first young adult novel, Other People's Country, was published in 2008. Lee lives in Victoria.

Mitch Vanegrew up in an artistic household, and since completing a Graphic Art course at RMIT she has been working as a freelance illustrator for the last twenty years- five of which she spent working in London. Mitch loves illustrating children's books, and is also interested in most forms of visual storytelling- cartoons, book covers packaging, design and editorial illustrations.

Review: A delightful story of Jasper McFlea who would only eat pasta so had no energy for sport. When a trip to the doctor changes his perspective Jasper no longer concentrates on eating food but just tasting. A wonderful story for parents who struggle to get their children to eat a balanced diet.