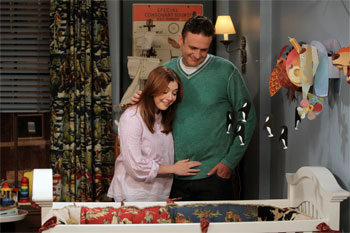 Question: Which part of your characters' journey throughout this whole series has been most surprising to you?

Jason Segel: In terms of a full series journey, they have done a lot of Marshall finding his chosen profession. I think that's the big thing. We had a couple of seasons of turmoil, but Marshall and Lily has never really been in question as a couple, so I think the thing that has been most in transit with Marshall has been his career path, trying to figure out what he is going to do, and the choice between money and his ideals, and how best to be there for his family, and what's more important: your family or your job? I think that's been the running thing with Marshall.

Alyson Hannigan: They have given Jason some great stuff to do: the stuff with his father was really…

Alyson Hannigan: No! Remember: he died.

Jason Segel: Oh. Yeah. That was an amazing acting opportunity on a sitcom. You don't normally get to do that sort of stuff. That's the luxury of running for nine years.

Alyson Hannigan: That was amazing.

Jason Segel: That was really cool. 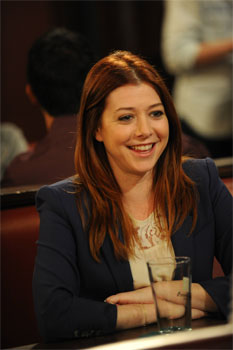 
Question: Do you think that relationship will always be happy? Should we ever be worried about Marshall and Lily?

Alyson Hannigan: Oh no. Just Marshall. Look who's playing Marshall! No, I don't think so. You can't worry about them. Especially as we've seen them in the future and they're together.

Alyson Hannigan: They may have a drinking problem, but that's fine.

Jason Segel: I know! We look really old when we do the 20-year flash-forward. I am completely bald and I look like things aren't going well.

Alyson Hannigan: They may have aged us a little too much. But then when we're really old, I think we look pretty good.


Question: One thing that fans of the show really love are the slaps. Can you talk about the slaps?

Jason Segel: It's always fun when they work the slaps in, and I think having a finite number of them is really fun because you can count off what has been used up, and I really enjoy that element to the show.


Question: Are you a Star Wars fan in real life?

Jason Segel: I enjoy Star Wars very much, and the Joseph Campbell metaphor aspect. I think they have taken a classic mythology and updated it for a new generation and a whole new era of science and technology, so I appreciate it very much in that regard.


Question: But you wouldn't use a lightsaber to carve your turkey in real life?

Jason Segel: No, no, no. I don't want to get really deep into it, but these are Greek myths that are now translated into an era that children of the modern age can relate to, and I think that's really remarkable.

Alyson Hannigan: And he doesn't want anyone messing with his turkey.


Question: They say never work with children or animals, but how is it working with a baby?

Jason Segel: Well, I'll tell you this: babies don't know they're acting at all, they just think that you're taking care of them, so they cry. They don't care if it's action or cut, they just cry a lot, or cry in my presence because I'm gigantic, and they can smell my fear a mile away. So we're all learning. It's a learning curve, me and this baby.

Alyson Hannigan: They are so cute.

Jason Segel: I hate to spoil the illusion that it's one baby, but it's actually babies. It's a rotating merry-go-round of babies. And they are really scared of me. Really scared. I don't know why. I don't take the time to get to know them. They are prima donnas. Like, you don't see me cry on set… anymore.

Alyson Hannigan: I have heard a lot of screaming. Did you hold them upside down again?

Jason Segel: I did not this time, as per your instructions.


Question: Tell us about a favourite moment that you have from Season 8. The godparent game show stands out.

Alyson Hannigan: Oh, when we were trying to figure out who to name godparent for Marvin, and we had a giant game-show wheel: that was cute.

Jason Segel: Oh yeah, that was really, really cute. That was great.

Alyson Hannigan: Everything blends into one in my memory.

Jason Segel: It really does; especially because it's been to some extent one continuous story. Standalone episodes like the cockamouse episode…

Alyson Hannigan: I was just going to mention the cockamouse! Was that Season 8?

Jason Segel: That was a long time ago. Season 2, easily. You remember that kind of stuff, but stuff that was about the kind of moving plot lines, they all blend together at this point. 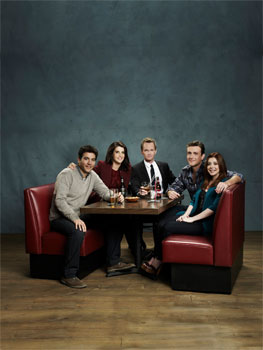 Alyson Hannigan: We're so bad at the -Name That Episode' game.

Jason Segel: How I Met Your Mother trivia, we'd probably be worse than the fans, for sure.


Question: You obviously all get along on the set, you're really good friends. Do you make each other laugh a lot? Are there a lot of mistakes and bloopers that will end up on the DVD gag reel?

Alyson Hannigan: And Jason loves to do that.

Jason Segel: It's a lot of fun on set, I must say, and we each have our own particular button. We've learned each other really well, each other's laugh buttons, so it's really a good time.

Alyson Hannigan: If Jason and I get each other going, it's kind of dangerous because it takes a while to recover.

Jason Segel: This is my TV wife, you know, for like nine years now.

Alyson Hannigan: But the thing is that we've never taped in front of an audience. They add the laugh track in later, so our goal has always been to make each other laugh.

Alyson Hannigan: So yeah, we do try to make each other laugh.


Question: How was it to finally get some interaction with the audience, your fans at the Comic Con panel, and being there with the show for the first time?

Alyson Hannigan: It was really sweet. It's so cool to see all the people that care. I mean, some people camped out for like two days to be in there. It was amazing.

Jason Segel: And to just be there with this group of people. We all met each other about nine years ago now, and to be near the end of a run of something that was so special for all of us, and to get to see firsthand some of the people that the show impacted, who cared about it in various capacities, was just really, really exciting.


Question: We finally catch a glimpse of the mother at the end of Season 8, how is Cristin Miloti and did she fit right in with your gang on set?

Alyson Hannigan: Probably just the last episode. That's also the one I'm most dreading because how are we going to get through that without just bawling?

Alyson Hannigan: I think that just went to Junk mail.

How I Met Your Mother Season 8 DVD 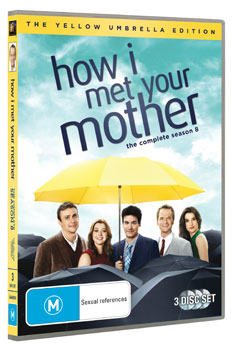 The arrival of baby Marvin reminds Marshall and Lily of things they need, like sleep, better jobs and sex! Meanwhile Barney uses his playbook to win over Robin, but not her scary dad. Marshall tries to right a wrong in court in hopes of becoming a judge, and Robin's past is judged. Ted designs an amazing building, and also has designs on Barney's half-sister! But does he meet his future wife?

Check out all 23 hilarious Season 8 episodes, featuring guest stars like Paul Shaffer, Ralph Macchio and Kyle MacLachlan! This 3 disc set is packed with special features, only available on DVD, that take you behind-the-scenes including a tour of the set with Josh Radnor and the making of Robin Sparkles' music video, plus hilarious deleted scenes, gag reel and audio commentary.

Special Features:
Deleted scenes
Audio commentary on Farhampton and The Final Page
PSI Love You Music Video
The Making of PS I Love You
Where We Make You Mother: Set Tour with Josh Radnor
Gag reel