The 2019 Victorian State Schools Spectacular (VSSS) will bring together 3000 young performers from more than 200 government schools across Victoria, for two shows on Saturday 14 September at Melbourne Arena. Students dedicate many hours across many months preparing for the three-hour, live Spectacular. This opportunity of a lifetime gives them the chance to perform to an audience of around 12,000 people at Melbourne Arena and a TV audience later in the year on Network Seven.

The theme for this year's Spectacular is 'Made of Stars'. With a talented 80-piece orchestra and some of the best vocalists and dancers from Victorian state schools, the show will feature a galaxy of out-of-this-world performances from a top musical line-up of songs from artists including, Justin Timberlake and Madonna, David Bowie, Lady Gaga, Daft Punk, Blur, Bruno Mars and Rhianna to Imagine Dragons, Stevie Wonder, Yothu Yindi, Sheppard, Paul McCartney and Eric Clapton.

Expect to see athleticism at its finest when for the first time the Spectacular meets the X Games at Melbourne Arena with dare-devil BMX riders, skaters and scooter riders. And the audience will get a front row seat at a fashion parade inspired dance featuring glitterati – a fun take on a tongue-in-cheek look at the world of fashion featuring dancers dressed as paparazzi and multiple Anna Wintour's all trying to get on to the red carpet to be seen by the TV cameras!

Following on from their mesmerising debut last year, the Pasifika Choir returns, and a specially commissioned Haka titled 'Wikitoria' (Victoria in Maori) which speaks of living together on this land created by Maori Haka Teacher Luke Hiki (from Narre Warren South P-12 College).

Since its inception in 1995, the Victorian State Schools Spectacular has been helping students to get hands-on training and mentoring both on stage – as singers, dancers and performers – and behind the scenes in audio, lighting, video production, stage management, costume, hair and make-up.

The Spectacular contributes towards a key Education State target of improving critical and creative thinking, and of more Victorian students achieving the highest levels of achievement in the arts by 2025.

"Creativity is such an important part of any child's education, and I'm proud that the Victorian State Schools Spectacular helps students to gain valuable, hands-on experience in the creative arts." "To all of the Victorian students in rehearsals for the Spectacular – as singers, dancers, performers and behind the scenes - best of luck. I hope you make your school community proud and enjoy the journey along the way."

Presented by the State Government of Victoria, the 2019 Victorian State Schools Spectacular – 'Made of Stars', is a not-to-be-missed event. 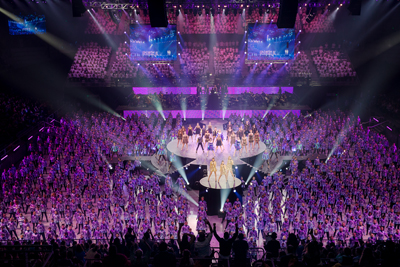 Jacinta has established a career in the music industry over the last 13 years as a performer on local and international stages and an ongoing singer/songwriter. As a session vocalist, Jacinta has recorded radio and TV ads and performed backing vocals for Havana Brown, Leo Sayer, David Campbell and many more.

Her first solo EP saw her writing and recording with Grammy nominee Phil Turcio and Gary Pinto, Gary also featuring on one of their co-written tracks, and the self-titled EP was released internationally.

Jacinta completed a degree in education and holds an advanced diploma in Music Performance. She currently teaches voice and ensemble at JMC Academy.

Question: Can you tell us about your role in the Victorian State Schools Spectacular?

Jacinta Caruana: My role for the Victorian State School Specular is to tutor the 7 backing vocalists of the production. This year, they are singing 29 songs, sometimes in 4 or 5 part harmony so it's a big job but a very rewarding one.


Question: Is this your first year working on The Victorian State Schools Spectacular?

Jacinta Caruana: This is actually my 4th year in this role and working for The Spectacular. I've been part of the production since 2016.


Question: Can you talk us through this year's theme, Made Of Stars?

Jacinta Caruana: What's wonderful is that the theme of the show is always led by the song choices that the performers actually have a big part in. The show is the designed around that in a sense. The creative team found that a big part of what the message the performers wanted share was about caring for our planet and taking care of what we have and of each other. It's really great to see these performers lead such an important message to such a huge audience.


Question: What should audiences expect from the Victorian State Schools Spectacular 2019?

Jacinta Caruana: To be inspired! No matter how many times I hear the students perform and see the production leading up to the big day, the energy and passion these kids have never ceases to amaze me. Audiences can expect a vibrant show with lots of colour and energy. This show has a bit of rock and pop right through to classical pieces and classic ballads. Something for everybody!


Question: Can you share with us any of the songs featured in Made Of Stars?

Jacinta Caruana: Without giving away too much, you can expect to hear songs from artists from Joni Mitchell and David Bowie, right through to Charlie xcx and Aussie band Sheppard. It's a really great showcase of the versatility this cast brings.


Question: What are you enjoying most, working on the Victorian State Schools Spectacular?

Jacinta Caruana: The endless energy and enthusiasm these students bring each week makes each rehearsal a real pleasure. Introducing them to new material and hearing how they embrace new songs in such a variety of genres is really rewarding. On top of this, after spending about 7 months with these kids, I love connecting with these performers and seeing them grow over that time and beyond the show. It's really nice to think I've played some part in their artistic journey.


Question: What originally inspired your passion for singing and songwriting?

Jacinta Caruana: From what my parents tell me, even as a baby I would wriggle around my cot to music that would be playing and it just never stopped. There's footage of me as a 3 year old belting out John Farnham tunes in our kitchen with a little microphone. So I guess music chooses you in a sense. When I started singing lessons I was introduced to singers like Tina Arena and Whitney Houston and I really appreciated and related to the passion and strength in those voices. I fell in love with how powerful that was. I think song writing is a love that develops when you want to connect with music on a deeper level. I wrote my first song at 9 years old and I think that was my way of wanting to have some ownership over my performance and express myself through this craft I loved so much. It's not always easy but definitely something I find myself coming back to often.

Jacinta Caruana: I'm hoping to go into production with some new material I've written and release singles as they're ready. I also love singing backing vocals and look forward to more opportunities to work with incredible artists as I've been lucky enough to do in the past. The beauty of this industry is there are so many pathways and if you have strong passion and strong work ethic, it's not hard to stay busy!