I Belong To No One 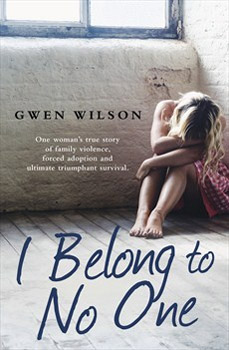 I Belong To No One

A teenager in the 1970s, Gwen Wilson grew up in Western Sydney. It was a tough childhood. Illegitimate, fatherless - her mother in and out of psychiatric hospitals; it would have been easy for anyone to despair and give up. Yet Gwen had hope. Despite it all, she was a good student, fighting hard for a scholarship and a brighter future.

Then she met Colin. Someone to love who would love her back. But that short-lived love wasn't the sanctuary Gwen was looking for. It was the start of a living hell. Rape was just the beginning. By sixteen she was pregnant, her education abandoned. Australian society did not tolerate single mothers; prejudice and discrimination followed her everywhere. In an effort to save her son, Jason, from the illegitimacy and deprivation she'd grown up with, Gwen chose to marry Colin - and too quickly the nightmare of physical abuse, poverty and homelessness seemed inescapable.

In 1974, in the dying days of the forced adoption era in Australia, this isolated teenager was compelled to make a decision about her child that would tear her life apart, one she would never truly come to terms with. I Belong To No One is one woman's story of all she lost and how hard she fought to survive and eventually triumph.

Gwen Wilson started writing her memoir in her fifties. Essentially self-educated, Gwen worked as a motel receptionist, dental nurse and switchboard operator until at nineteen, in the exciting days of the pre-container era, a chance opportunity saw her land a role in customs clearance on the male-dominated Port Adelaide waterfront. A stable marriage and successful career in shipping and logistics followed until she retired, after which Gwen entered university for the first time and now holds a Master's degree in Electronic Commerce. Gwen and husband Bill live in Wollongong, New South Wales.

Question: What inspired you to write your memoir?

Gwen Wilson: At my 50th birthday party, I realised how far I had come in life, and I felt credit was due to all my early supporters, without whom I would not have grown into such a strong and resilient woman. I decided to write about the tapestry of my life, and how these people had woven my threads, inspired by this quote from Sandra Day O'Connor:

'We don't accomplish anything in the world alone, and whatever happens is the result of the whole tapestry of one's life and all the weavings of individual threads from one to another that create something."


Question: What did you find most difficult when writing I Belong To No One?

Gwen Wilson: Letting the reader up close to my mother was a challenge that I did not address until around the tenth draft, even though in the first draft I had written her family history, schooling and so on, which I subsequently edited out. I was constantly worried on behalf of my brother, too, but wrote on regardless. I could hardly white-wash the break-down of our relationship and still have a credible story. Initially, also, I kept each chapter as a separate MS Word document, and I lost the first version of the rape scene. It took me another month to face writing about it again.


Question: How has your family responded to I Belong To No One?

Gwen Wilson: They are supportive of my right to tell my story. The subject matter, however, is delicate, and may invoke sad memories. My son and brother are the most impacted, and I leave it to their discretion whether to read I Belong to No One.


Question: What do you hope readers take from the book?

Gwen Wilson: Firstly, a greater awareness and understanding of the era of Forced Adoption; how the system worked, and the limited choices available. Perhaps the reader can walk in these girls' shoes and realise that their babies were not surrendered because they were 'unwanted". I have a younger friend who tells me she learnt about the Stolen Generation in school, but had never heard of this practice!

As well, I Belong to No One is a voice in the current dialogue around domestic violence. Women did not admit to being abused in the 1960s and 1970s, and it is important that we break down those social taboos and encourage discussion.

Ultimately, I Belong to No One is a story of triumph over adversity, and demonstrates that we do not have to be defined by the circumstances of our birth or upbringing.