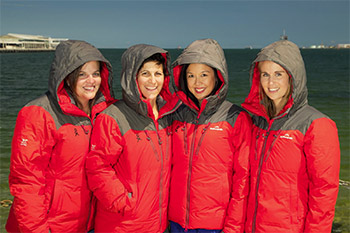 Homeward Bound - a global initiative for women in STEMM (science, technology, engineering, mathematics and medicine) fields and addresses the global deficit of women and scientists in leadership - has undertaken the world's most remote collaborative gender forum during its second voyage to Antarctica.

It's no coincidence that this gender forum was finalised just ahead of International Women's Day, in the hope that the women's voices and commitments would be heard as a collective across the world.

Of the 78 women on board there is a Nobel Laureate, the program's first African participant and a children's science TV presenter.  Although their backgrounds, experiences, and careers are diverse, they " along with the 170 or so other women in the wider Homeward Bound network, representing three cohorts of a projected ten " share a desire to work together to change the face and practice of leadership to ensure the protection of the planet as it faces climate change.

These women have worked over three days to create a list of actionable commitments to create global change around gender bias, with the ultimate goal of leading the world to see our planet as an irreplaceable home. Although these women are based in STEMM, they found that the issues they confront are faced by women in every walk of life. The action they plan to take addresses the systemic challenge of finding, selecting, promoting and retaining women in all vocations into leadership roles, in STEMM fields as well as academia, across industry, government, health, non-profit and education sectors.

To focus the women on the ultimate goal of producing practical, actionable outcomes that contribute to global change, several questions were posed, including: what prevents women from entering typically male-led careers, and what are the biases for women in being promoted to leadership roles?

The women identified and reviewed extensive global research which concluded the following:

-   Cultural factors significantly influence what women are interested in

-   Once women do have leadership roles, the rewards and retention are lower

The issues are largely the same for women in the broader working environment, but the forum found that for women in STEMM in particular, the challenge of having children, and the inevitable interruption to careers, dramatically impact the number of publications and consequently grants, which accumulate to positively bias men. In short, it is not the intellectual ability of women holding them back, it is the system, and as a result the world loses some of its best potential leaders, year after year.

From the Antarctic forum, 14 statements of action were agreed, including:

1.  Homeward Bound, together with the now global network of women, will take responsibility for making sure every woman has the facts about bias against women

2.  Clever, informed and effectively-linked networks will be designed to create support mechanisms: women are stronger together

3.  The collective agree to role-model visibility - which includes identifying and sharing personal stories underpinning their progress

4.  Create, publish and make publicly-available tools and resources to ensure both men and women are simply and practically informed

6.  Institutions and organisations from around the world will be targeted with regard to pay equity, and the opportunity to influence policy and procedures that help or bias women

7.  The global network will seek out support from male champions of change to influence outputs - working together for common cause

These ideas are currently being worked into tactical plans to take forward practical actions post-voyage and into the next cohorts of Homeward Bound.

Homeward Bound founder, Fabian Dattner, says: 'Does it sound ambitious? Yes. Can it be done? Yes. This global network of women is connected in ways that we have not seen before. The Homeward Bound project operates on three key principles: use your own best judgement at all times; if in doubt, get two to three people who can help; and if you make a mistake, celebrate and share it so we all learn from it. This is the process that will enable a global network of brilliant minds to help affect change.

'When a Nobel Laureate and a PhD student share the same journey, you really see how the paradigm of leadership is being turned on its head, for the better." Alice Ruhweza, a Ugandan environmental leader who supports decision-making in policy planning, said, 'Even through we've all heard a lot about gender issues, when you read the fact sheet the statistics are really glaring. It was an eye opener for me. We need to be bolder in exploring our options. If that means running for office, we run for office. We need to be the change we want to see and step out."

Sandra Guzman, a Mexican social scientist with an interest in climate finance, said 'Women can be the change-makers that deal with the world's big problems like climate change. Women are not the future, they are the present: we are changing the story right now."