The First Time He Hit Her Interview Tara Costigan was the woman next door. A hard worker. Quick to laugh and easy to like. She was happy, confident, strong. A woman who always looked after herself and her kids. Close with her family and her friends, she was much loved. Then, in 2013, she met Marcus Rappel. A local tradie, he was charming and sincere, they dated and fell in love. That should have been the end of a happy-ever-after story. But for Tara, it was much uglier. And for her family it would be devastating.

A year later, Tara was pregnant to Marcus. Her family had been worried for a while, but Tara didn't tell anyone how Marcus's jealousy was souring the relationship. She tried to keep it quiet. Despite everything, she never imagined he would be physically violent - he would never hurt her. Tara was wrong. One fine day, the last day of summer in 2015, she was holding their newborn baby in her arms when he attacked her with an axe. Her murder seemed to come out of the blue. But as this extraordinary, often shocking book reveals, it did not.

The First Time He Hit Her is an attempt to understand why dozens of women are murdered each year by men who profess to love them. It is a study of the evidence – exclusive interviews with the Costigan family, text messages, emails, photographs, recordings and affidavits – that forms an extraordinary record of a deteriorating relationship. Ultimately it is an exploration of how this atrocity came about and what it might show us about the link between various forms of violence. The First Time He Hit Her seeks to highlight the dangers that can accompany the commonly-held assumption that intimate partner homicides always have some history of physical violence in the relationship and begs women to look closely at the warning signs. Tara Costigan was just one of eighty women murdered in Australia in 2015. The Counting Dead Women project estimates that 80 per cent of this number died as a result of domestic violence. Heidi said: 'I want this book to reach women who are feeling vulnerable and fearful in abusive relationships.'

Heidi Lemon received an Honours degree in Creative Writing from the University of Canberra. For the past few years she has devoted herself to writing, funding her efforts with a job in retail. Heidi worked closely with the Costigan family during the writing of this book, which is her first.

The First Time He Hit Her

Question: What originally inspired the idea of The First Time He Hit Her?

Heidi Lemon : I was deeply disturbed by the news of Tara's murder back in 2015 and followed the case closely as it went through the courts. When I met Michael Costigan, Tara's uncle and then-CEO of Tara Costigan Foundation, I learned that he wanted a book written about his niece's story but felt that he was too close to the events to write it. I commenced research soon after.


Question: Who do you hope reads The First Time He Hit Her?

Heidi Lemon : I hope that men and women of all ages will engage with this book, because Tara's story is a critically important one and deserves to be heard by everyone. 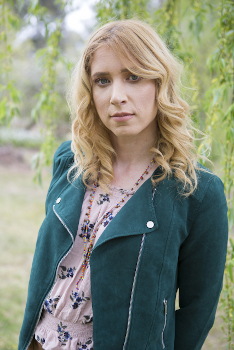 Question: What's the main message you hope readers take from The First Time He Hit Her?

Heidi Lemon : My hope is that this book will raise awareness of the fact that a relationship exists between verbal abuse and intimate partner homicide. Nearly 25% of women murdered by a current or former partner had not previously been the victim of physical violence by that partner. Tara was one of that 25% and she thought she wasn't in physical danger because Marcus Rappel had never hit her before. But the first time he hit her was the time he killed her. It's absolutely crucial for women to understand that this is possible, so that they can recognise signs of abuse and take steps to safely remove themselves from a toxic situation.


Question: What research did you do, prior to writing a true story about domestic violence?

Heidi Lemon : I conducted numerous interviews with Tara's family and friends, and was profoundly moved to hear their memories, see their photographs and bear witness to their grief. By meeting with those who loved her, I was able to gain an insight into who Tara really was"the woman behind the headlines, a woman who breathed and slept and scratched her nose and laughed her head off"a real woman whose murder left a gaping hole in so many lives. I also met with ACT Director of Public Prosecutions, Shane Drumgold SC, and studied the stockpile of evidence that came out of this case, from text messages through to CCTV through to hours of courtroom audio. I was also present at Marcus Rappel's sentencing, from which he was forcibly removed.


Question: What's the process on writing about such a heavy topic?

Heidi Lemon : I won't lie, it was emotionally draining and extremely disturbing to immerse myself in the study of this case for almost four years. But Tara's story is so important and writing about her felt like a privilege. There were a couple of times when the work seemed so daunting that I doubted whether I could do it"but I always knew that I would. Put simply, writing Tara's story became my purpose.

Heidi Lemon : It sounds like a cliché, but it sure is true: Do. Not. Give. Up. Listen to that small voice in your head that insists you can do what the louder voice claims you can't. Believe in your work and give it all you've got. Be willing to pour all of yourself in.

Heidi Lemon : I inherited my love of the English language from my late mother, Sandy Alchin. She delighted in words and used to write amazing poems when I was small which she illustrated with 'peanut people', her own characters with knobbly elbows and haloes. Mum had an ear for language and introduced me to many of my favourite writers"Patrick White, Colette and Virginia Woolf. We loved to discuss books and show one another particularly beautiful sentences we had come across. She encouraged me endlessly in my writing, and I carry that encouragement with me always.

Heidi Lemon : I'm not entirely sure what's next, but I suspect that I will pursue non-fiction. I have a couple of ideas swirling around!