Almost two-in-three Australian seniors may be jeopardising their -golden years' by not protecting against an often fatal lung infection, despite being at increased risk.

Lung Foundation Australia research, has revealed seniors' lax attitudes towards, and misunderstanding of the seriousness of pneumonia and importance of protecting against the infection.

Heather Allan is the Director – Marketing and Health Strategy for Lung Foundation Australia and is currently acting as the Chief Executive Officer.

She has worked for the Lung Foundation since 2005, initially as Director of the COPD National Program before becoming the Director of Marketing and Health Strategy.

She has a strong background in public health awareness campaigns and in developing strategies to encourage people to look after their health. Before joining the Lung Foundation, Heather worked in various senior roles in public health in New Zealand.

In addition to public health roles, she served for four years as the Executive Director of the Canadian Chamber of Commerce in Hong Kong.

She ran her own communications and strategic planning consultancy for five years with clients from a variety of sectors, including tourism, health and hospitals, fashion and local politics.


Question: What is the Love Your Lungs at 65 Years Young research and awareness campaign?

Heather Allan: Lung Foundation Australia is a national charity that aims to make lung health a priority for all in Australia.

The -Love Your Lungs at 65 Years Young' public health campaign focuses on the seriousness of pneumonia and urges people – especially older Australians – to speak to their doctor about how to protect against pneumococcal pneumonia.

The Love our Lungs at 65 Years Young survey was conducted by Lung Foundation Australia looking at people between the ages of 65 and 74.

What we were trying to understand was the level of awareness amongst this group about how serious pneumonia is, what the risks are of contracting pneumonia, and how best to protect yourself.


Question: What did you find most alarming from the results of the Love Your Lungs at 65 Years Young research?

Heather Allan: The survey found that more than 60 per cent of Australians aged between 65 and 74 had not had the vaccine despite being at increased risk.

And more than 90 per cent of them didn't know that they were at increased risk.

So while the message around immunisation to protect against influenza is getting through to the community, we're concerned that the same level of awareness about the role of vaccination in pneumonia is not there. 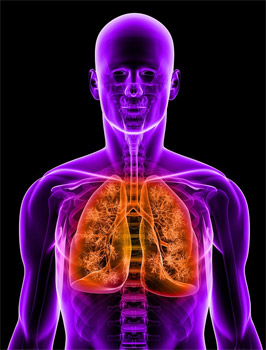 Question: What are the symptoms associated with pneumococcal pneumonia?

Heather Allan: Pneumonia is a severe infection of the lungs. It usually is caused by bacteria but viruses and even fungi can cause it.

The symptoms of pneumonia may vary depending on the age of the person, the cause and severity of the infection, and any existing problems with immunity. Symptoms may include:
Rapid breathing
Breathing difficulties
Fever
General malaise
Loss of appetite
Abdominal pain
Headache
Chest pain
Cough
Blue colouration of the skin around the mouth (cyanosis), caused by lack of oxygen.


Question: Can you talk us through the high risk factors for pneumonia?

Heather Allan: Pneumococcal pneumonia can affect anyone but the risk increases as you get older.

As a result, Lung Foundation Australia is urging people 65 years of age and older to speak to their doctor about the best ways to protect themselves against pneumococcal pneumonia, including immunisation.

Once you're over the age of 50, your risk of pneumococcal pneumonia starts going up rapidly. Thus, in your 60s it's higher, even higher in your 70s, and much higher in your 80s, so it's a good idea to get government-subsidised vaccine when it's available at 65.

This year, more 3 million Australians are turning 65 or older. This is important because the incidence of pneumococcal pneumonia rises exponentially between the age of 50 and 80 to more 200 persons per 100,000.

Apart from vaccination, practicing good hygiene is vital to avoid the spread of infection, including regular hand-washing, keeping household surfaces clean, and learning to recognise the symptoms of pneumococcal pneumonia, including rapid or difficulty breathing, cough, fever, chills or loss of appetite.

The pneumococcal booster - given five years or more after the first dose - is important for people who have high-risk conditions, especially those affecting the heart and the lungs, as well as being elderly.


Question: How is pneumonia treated?

Heather Allan: In the days before antibiotics as many as 1 in 5 people with pneumonia could die from pneumonia and recovery was sometimes very prolonged. Antibiotics are thus a mainstay of treatment.

Treatment options include:
Hospital admission – for babies, young children or anyone who is very unwell. Mild or moderate cases of pneumonia in people who are otherwise well can often be treated at home
Plenty of fluids – taken orally or intravenously
Medications – to relieve pain and reduce fever
Rest – sitting up is better than lying down.

Leading Australian specialists have warned that early detection of lung cancer is the difference between life...

The number of women dying from lung cancer in NSW has increased almost 200 per cent over the past three decades...

Smokers with lung cancer feel guilty about their diagnosis and many fail to seek treatment according to The...

The Grey - Their efforts to survive and find a way home to their loved ones are threatened when the men come...

The Twilight Saga: The Official Illustrated Guide provides readers with exclusive new material and everything...

A strong and vivid novel based on the fascinating true story of a group of young Australian performers -...

The Dangers of Smoking

You ask yourself, as I do, why people continue to smoke, when it causes so much damage? Addiction is the answer....

Smoking, who needs it?

This problem is as close as the nearest cigarette vending machine. Tobacco use among the young is on the rise,...