Hayley Marsten has released her new single 'Red Wine, White Dress' and its accompanying video. The release comes off the back of 'Wendy', Marsten's most successful single to date, which received widespread airplay across Australia and peaked at #25 on the CMC charts. It was added to both ABC Local and ABC Country playlists and has received over 185,000 plays on Spotify. That's the past and the future is 'Red Wine, White Dress' as well as Marsten's upcoming debut album Spectacular Heartbreak, set for release on 30th August – pre order here.

Marsten co-wrote 'Red Wine, White Dress' with Brad Butcher, a Golden Guitar and QMA winner. She'd fostered the idea for a long time to describe how someone can stain your life or make you feel a little ruined – the red wine on a white dress. 'It wasn't until I was going through a break-up that it felt like the relationship had stained Brisbane for me in a way that meant I could write it,' said Marsten. 'I felt like there was nowhere we didn't go, nowhere I could escape the grief and confusion, and it brought up all my most suppressed fears.'

'It was incredibly confronting to record,' said Marsten, 'but I feel like it embodies what the album is about, the strength to show your vulnerabilities. Luckily time is the best kind of emotional wine stain removal.' The track was recorded in LoveHZ Studios in Sydney with Matt Fell, an ARIA and Golden Guitar winning producer, while the video was shot in Brisbane with Duncan Toombs from The Filmery.

Speaking about the video, Marsten said 'I really wanted to shoot it in Brisbane because the city is so tied up in the song. Duncan and I wanted to keep the video dreamlike to represent the haze of a confused relationship, while we focused on the two sides represented in the song: the vulnerability of the white dress and the anger of the red wine.' It was filmed at Can You Keep a Secret, a bar in South Brisbane. 'It was the perfect backdrop because it literally looks like it's stuck in time,' said Marsten, 'and instead of heading for the obvious visual of red wine on a white dress we wanted the video to be tinged red like a stain on my mind.'

The release comes just two weeks before Marsten releases her debut album, after which she'll embark on her first headline tour while also supporting artists including Troy Cassar-Daley and Fanny Lumsden. The tour will take her through Queensland, NSW, Victoria and Tasmania and with the new album under her belt, it's sure to be a tour that fans will long remember. 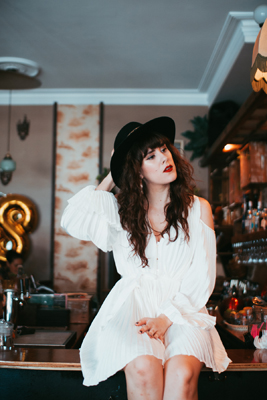 Question: Can you tell us about Red Wine, White Dress?

Hayley Marsten: I wrote and re-wrote this so many times and it wasn't until I went through a break up (conveniently went through two during writing this album) and had a co-write with Brad Butcher that I really got it right. I felt like this relationship had completely stained Brisbane for me. It felt like there was nowhere we didn't go or even if we didn't go there, I had still been there thinking about how great things were going. Being back in those places after having it all ripped out from under me, I was just so sad. I felt like I would never get over it and I couldn't see a time I wouldn't be stained by the way I was treated, that I didn't fear being alone, I was just so scared I would never be able to move forward. Luckily, time is the best kind of emotional Napisan.


Question: What was it like filming the video for Red Wine, White Dress?

Hayley Marsten: 'Red Wine, White Dress' creates such an easy image, throwing red wine on the white dress etc. Duncan Toombs (of award winning 'The Filmery') and I really wanted to stay away from the obvious and focus more on the feelings around the song. To me, there are two different feelings - sadness and vulnerability (the white dress) and anger (the red outfit) which also plays on the before and after of the situation. We also used a lot of haze and shot in double time to make it look like it was a dream, and everything moves in slow motion. It was such a great experience, especially the fact we got to shoot in Brisbane, because the town is so tied up in the song, in a great little bar that literally looks like it's frozen in time (Can You Keep a Secret? In Woollongabba).

Hayley Marsten: I think my music is a lot like my personality, big, fun, dramatic and unequivocally country.

Hayley Marsten: Life and love I think are my two main inspirations. I'm a woman with a lot to say and I think that fact is a big motivator for me to write new things.

Hayley Marsten: That's a tough one. I love being able to create a show around my records and interact with an audience about how I wrote the songs. But there's something very special about hearing your song go from a little acoustic demo to a fully-fledged production. I don't think I can choose.

Hayley Marsten: Lots of new songs and stories and a lot of laughs!

Hayley Marsten: I think it's probably 'Wendy'. That song had such an amazing response and people really love to sing along to it. Nothing beats hearing your lyrics sung back to you.

Hayley Marsten: Taylor Swift, I am a huge Swifty and I think she is such an amazing songwriter and I love how she reinvents herself from album to album.

Hayley Marsten: I honestly can't remember what the motivation was, I can't remember a time where I didn't want to be a musician. I wrote my first song when I was seven and I was hooked.

Hayley Marsten: Taylor Swift because duh or Dolly Parton because life's best motto is what would Dolly do?