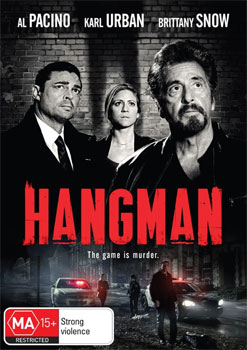 Hollywood legend Al Pacino plays decorated homicide detective Ray Archer who, along with criminal profiler Will Ruiney, is on the trail of a vicious killer who is leaving a trail of victims…and clues to a twisted game of hangman. When they're joined by a journalist reporting on the crime spree, the trio must play along with the killer's wicked game if they are to stop the murders.

Co-starring with Pacino is Karl Urban, best known for his role as Bones in the recent Star Trek films, and Brittany Snow from the prodigious Pitch Perfect films.

When asked about the film, Director Johnny Martin (Vengeance) explained that he wanted something that was a real character piece. "To find a script that had only 6 actors in the whole movie and my 3 leads being in equal scenes throughout, made me curious how far you can go with each character and keep them exciting from beginning till end" said Martin.

On working with Al Pacino, Martin said: "We would allow this improv take, where we just go crazy and this is where we find these great Al Pacino moments. He is finding these places to go to, that's making everyone's character even stronger and it's like a domino effect. When Al prepared for the movie, he wanted to sit down and discuss backstory, he wanted to know every single one, even the smaller ones that only had three lines. He is a true professional."

Brittany Snow said about working with Al Pacino: "I went into this movie, hoping to learn a lot from Mr. Pacino. And I have. I think one of the greatest things I've learned is to be really relaxed and let anything happen. Getting to learn from such a legend and such a genuine person, and also working with Karl who I get along with really well, I feel like we are a little team and we had a lot of fun."

Karl Urban added: "It's been such a terrific experience, to see how a veteran of that calibre approached the work and the craft. Al is one of these actors who makes everyone around him lift their game and I learned a hell of a lot by working with him."

Pacino himself said about working on Hangman: "I like the surprises, because it is a thriller so there are unexpected things, the -oh I didn't know that' kind of thing. There's something about involving yourself in the script and finding it within yourself that I just like to do, that's why I am an actor. I enjoy the challenge of doing a movie, it's still that for me, I still enjoy that!"