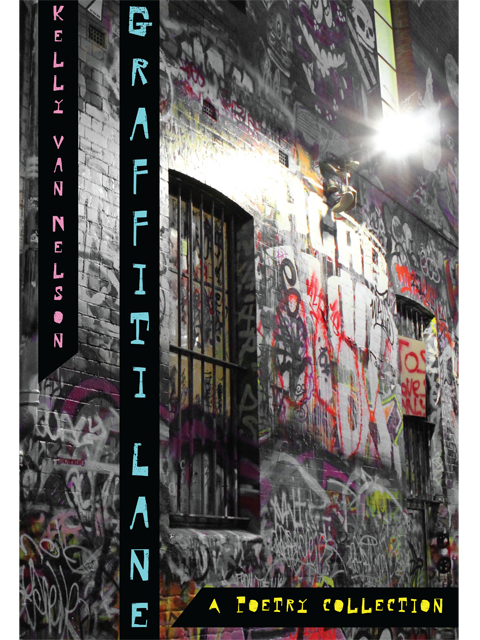 From council estate life, poverty, drugs and alcohol to Managing Director of a Global Company, Australian Author and Poet

Poet and author of Graffiti Lane, Kelly Van Nelson, was born in North East England. Kelly grew up on a council estate. Her Mum married four times and her Dad passed away in his forties.

Kelly remembers: "My outlet was reading. I read endlessly under the duvet with a torch until the early hours. Enid Blyton and everything else I could get my hands on. Even at a very young age, I remember always wanting to be a writer – I loved books and the escape that they brought from reality."

Kelly was bullied at school and she eventually snapped when the bullying intensified. Kelly punched the main instigator and her and the bully were suspended. The bullying stopped after this incident.

Kelly was smart at school, but she had to drop out at the age of 16 to get a job to help pay the rent.

"My teenage years were filled with smoking, alcohol, drugs, hanging around the streets. Some friends ended up in prison, others wound up dead from drugs. I bought a one-way ticket to London the second I turned 18. I wasn't getting on with my mother and hated home life. I had ninety pounds in my pocket and so easily could have ended up homeless or worse," Kelly states.

London was good to Kelly. She worked and lived in a hotel and met her husband when she was 21. Her career began as a secretary in the IT staffing industry.

Kelly reminisces: "I watched everyone around me, listened and learned. At the age of 20 I moved to South Africa with my husband-to-be and we married on the beach in Melkbosstrand in Cape Town, overlooking Table Mountain. We travelled Africa, through Zimbabwe, Botswana, Zambia, Gambia, Tunisia, then eventually moved back to the UK to Scotland where we lived on a farm. I went back into the IT staffing industry in a more senior position and kept working my way up through the ranks. I became top sales person quickly through always treating everyone I met with respect, from clients, to candidates, to colleagues. "

She gave birth to two children and moved to South Africa to be closer to her husband's family. The Van Nelson's opened a restaurant and renovated several properties over the next three years.

"It was tough financially though and the crime was a problem. (My brother-in-law was held up at gunpoint by four men with his family at home, my mother in-law was robbed a couple of times, my nephew also robbed, and worse happened to friends of ours). I did a lot of research about crime and prisons while I was in South Africa, visiting a jail there. My first novel, The Pinstripe Prisoner, was born, which has placed in several prestige literary competitions and has helped me secure my literary agent, Clive Newman at The Newman Agency."

Kelly and her family moved to Australia and lived in WA where she worked for The Adecco Group, the world's largest provider of HR, staffing, and talent solutions.

"I worked for the IT consulting brand, Modis, for several years, then in a group role, and am now the Managing Director of Adecco Australia. "

In recent years, workplace bullying, mental health and harassment moved to the forefront of new wellness initiatives. Kelly listened to many issues as The Work Health and Safety Team reported to her. She travelled extensively for work and started writing short stories and poems.

"The idea for my poetry collection, Graffiti Lane, started with writing poems about big bullies in the playground and corporate world. It evolved to include poems about diversity, gender pay, domestic violence, and feeling kicked down in the world. The poems then evolve into rising above the setbacks to eventually flying high and overcoming obstacles. I spent so much time in Melbourne travelling that the laneways attracted my attention too. The graffiti there is incredible, representing freedom of speech and work by amazing talented street artists. I would often take pictures of works of art, many that held an underlying important message. Graffiti began to influence my poetry collection too and several of the poems evolve around amazing graffiti artists."

Kelly and her family moved to Sydney in January 2019 so that Kelly could support company growth plans on the East Coast of Australia.

She was appointed to the executive team of Modis a few years ago where she was the only female on the board at the time. Kelly began to fight for diversity initiatives, gender pay equity and supporting STEM to attract girls to the technology industry where female representation is low. Kelly is also an inspirational key note speaker and judge at various industry events.

Kelly Van Nelson: I grew up on a council estate in Newcastle-upon-Tyne, with the kind of childhood where every surface was made of concrete and there was no safety net in the park. In my second year of high school my mother moved across the Tyne River and I started a new high school. I was bullied relentlessly by a handful of girls, not physically, but verbal taunts. I developed resilience and a strong willpower to succeed at my goals, skills which have helped me flourish in my corporate and writing career.

Graffiti Lane started with writing poems about big bullies in the playground as well as the corporate world. The concept expanded to topics like diversity, gender pay, domestic violence, and feeling kicked down in the world, then evolved into rising above the setbacks to eventually flying high and overcoming obstacles. I travel regularly to Melbourne and the graffiti laneways attracted my attention too. I gain creative energy from urban life so street art always catches my eye, especially when it's trying to get an important message out into the public domain. It's an artistic way to embrace freedom of speech.

At its heart, my writing is influenced by urban lifestyle. I like to write gritty, contemporary pieces that tackle social or current issues in some way, challenging the thinking of readers and myself along the way.


Question: How long has it taken to put together Graffiti Lane?

Kelly Van Nelson: A couple of the poems are some of my earliest work from my UK days that I dusted off, one which was first published in 2009. The rest of the collection is new and took me around a year to compile. My publisher, Karen Mc Dermott, had to nudge me along nicely to get through the final proof reading phase as I could easily have kept fiddling with certain elements of the manuscript for another year. The acknowledgements in particular took me forever – I was scared I would miss someone (I'm sure I did and am truly sorry! Everyone in my support network and fan base is amazing).


Question: What do you hope readers take from the poems featured in Graffiti Lane?

Kelly Van Nelson: I'd love just one reader of Graffiti Lane who might have hit rock bottom for any reason to know there is hope and eventually their time will come to fly high. Life can kick you down but you can fight back with an armour of resilience and willpower. Anything I can stir up on anti-bullying initiatives can't be a bad thing either.


Question: Which of the poems featured in Graffiti Lane holds the most memories, for you?

Kelly Van Nelson: Many old memories are stirred up from Weeds. I can often be found as a key note speaker on the circuit, talking to high school students about being fearless in their pursuit of dreams. When I went back to the UK recently, I had this brainwave that I could go and speak at my old high school. It saddened me to discover it's now closed, the result of having one of the worst education track records in the North East. Every kid needs hope but I was too late in my own home town to have a go at providing an olive branch to the students there.

The Jester deals with the toughest topic though. In the most obvious way, suicide is so final, but for those left behind, the memories never fade.

Kelly Van Nelson: I write something every day, even if it's just a couple of lines of a poem to help me unwind. I'm lucky to have been blessed with the ability to function with acute insomnia so I have very long days in which to fit everything in. I find reading and writing poetry a super antidote for stress, but my writing projects are extremely varied.

This last year has been a whirlwind of success on the short story front, with work published in the UK, USA, and Australia, so I'm thinking about pulling the short stories into a collection.

I've also received several industry accolades for my manuscript, The Pinstripe Prisoner, a contemporary novel set in South Africa and Edinburgh. My amazing literary agent at The Newman Agency is currently trying to find the perfect home for it. I'm working on a second novel based in Western Australia about drug addiction and have just written my first script for a play too. Too many projects, but I love writing about complex, taboo issues, that explore the intricacies of the human mind, and there are many!