When it comes to picking the voices who have carved out the Australian music scene over the years, Grace Knight is certainly one of the first names to come to mind. From fronting pop darlings Eurogliders to her well-established jazz career, Grace is one of those versatile performers who can turn her vocals to any style effortlessly. As her most recent (and 13th) album Keep Cool Fool attests, Grace Knight just keeps getting better and better.

As we kick into the second half of 2013, Grace is heading out on the road for an intimate run of Victorian shows, in the state that she now calls her home. 'Living in Victoria has given me the opportunity to perform here more often," she says. 'I love that a new audience has opened up to me. The Victorian audiences know their music and are very generous. There are also heaps of very cool venues that I hadn't performed at before moving here."

In fact, moving to Victoria has opened up more doors than just performance venues. The recording of Keep Cool Fool embraced the Melbourne music scene and featured all local musicians. Grace is the first to admit that if she hadn't moved to Victoria, then the finished album would have probably been completely different. 'Keep Cool Fool is a collection of songs that evoke the vibe of a 1950's jazz club – cigarette smoke, cocktails, bullet bras, red lips, bouffant hair and really groovy laid-back music," she says. 'We had so much fun recording this album, it was impossible not to capture that vibe. Fun is not an easy thing to record, but somehow we managed it. I am so lucky to be able to work with such a talented group of musicians, but to work with genuinely nice people was a bonus. We enjoy making music together and enjoy each other's company… and we get paid for it!"

Fun is going to be the operative word for Grace's upcoming shows. In fact, audiences are in for a definite treat as Grace brings together the band who performed on Keep Cool Fool. 'I'll be performing with a three-piece – guitar, double bass and drums – and this configuration is quite new for me," she says. 'I'll be singing songs from my previous albums Come in Spinner, Stormy Weather and Gracious through to my latest release Keep Cool Fool. The venues I'm playing are all very intimate, which I love because I get such a great connection with the audience."

Grace Knight started her career singing in folk clubs in the UK and -sang' her way over to Australia on the Women's Weekly World Cruise. It was once settled in Perth that she found her groove, forming Eurogliders with Bernie Lynch. The band enjoyed considerable success in Australia and overseas with hits such as Heaven (Must Be There). As the end of the Eurogliders drew near, Grace found herself a new home as one of Australia's ladies of Jazz when she appeared in the ABC television series Come In Spinner and recorded an even more successful soundtrack. Following the incredible success of the Come in Spinner album, Grace went on to record several other hit jazz records such as Stormy Weather, Gracious and Live to name a few.

Question: Can you tell us about the album, Keep Cool Fool?

Grace Knight: Keep Cool Fool is my thirteenth album; I was really inspired by the Mad Men television series with the lovely 1950's clothes, make-up and hair; I really loved it. I decided to research the music of that era and found a whole collection of fantastic songs. I tried to recreate what a 1950's smoky jazz club might be like and whether I was right or wrong, I captured what I was after, on this album.

Grace Knight: Working with the musicians that I worked with, on this album, certainly made Keep Cool Fool possible. It was new for me to work with a guitarist as I've spent the last twenty years working with a pianist and for a change I was introduced to a wonderful guitarist who I am thoroughly enjoying working with.


Question: What should Victorian audiences expect from the upcoming tour?

Grace Knight: The show will be very groovy and quite intimidate. I have performed at Bennett's Lane before and I'm really thrilled to be going back to perform two nights there. We will be touring all over the place including Kangaroo Ground. I will be performing songs from Keep Cool Fool and from my previous albums over the past twenty years. It will be a very groovy night!


Question: What inspired you to reunite with Eurogliders for the upcoming shows?

Grace Knight: I am really excited about the Eurogliders upcoming shows; what started the ball rolling was that I got a phone call asking if I'd be interested in Eurogliders supporting The Boomtown Rats when they came from the UK to do an Australian show, I went home to Bernie and asked if he'd be interested to -Euroglide' again and he said -if you are, I am' and we put together a band from Victoria. When The Boomtown Rats cancelled their tour, we'd already put the hard work in of getting a band together and thought we might as well see it through and agents asked us to perform. We are very much looking forward to starting the Eurogliders tour in Victoria and we'll see what comes of that. 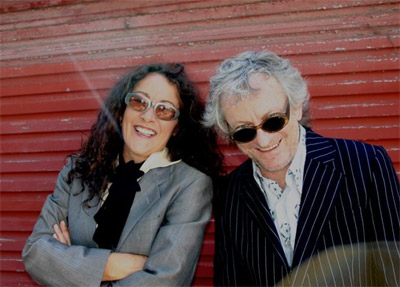 Question: What should audiences expect from the Eurogliders shows?

Grace Knight: To be honest, I received a DVD of the MTV 1984 New Year's Eve show of which Eurogliders performed and the energy is absolutely manic – don't expect that (laughs)! I'm not sure I have that amount of energy, but what we certainly will be doing is playing all of our hits and there are so many we'll have a night of hits however we will add a few more new songs.


Question: What's your inspiration when writing?

Grace Knight: Bernie Lynch is the writer for Eurogliders. In terms of me, when I am singing his songs, my inspiration comes from the story, whatever that story tells me which can often be quite different to what Bernie was thinking about. I will interpret the song the way I see fit given that I'm the singer.

Grace Knight: This is going to be a bit of an odd answer but I listen to classical, pianist opera and jazz music. I don't often listen to singers and the reason is that I find it very easy to copy other artists so if I listen to a female singer the next thing I know her sound will come out of my voice! I try not to taint my own style with someone else's, I try very hard to just do what it is that I do as honestly as I can.

Grace Knight: Never, no! I've been doing this for 35 years; it's a bit late now… I think I might be unemployable (laughs)!

Grace Knight: Performing live! I enjoy recording, mostly I enjoy the preparation for recording but my favourite is performing live. For me, there is nothing better than the interaction between myself and an audience as there is a lot of energy that gets passed from me to them and back from them to me.

Grace Knight: I think the biggest challenge is maintaining my work as my job is as an artist and a singer, over the years with the introduction of pokie machines, it is less and less that venues have live music and that has been a very, very hard thing to maintain. I am still working as an artist and I'm very grateful, I know it has been very difficult for other artists to maintain a life as an artist.

Grace Knight: One of my favourite artists would be Peter Gabriel.