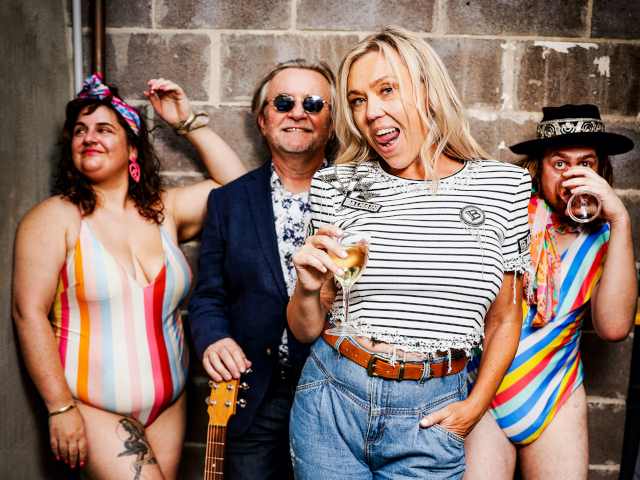 She's been sacked for gross misconduct, has two failed marriages and three broken engagements, was once a high-flying PR maven working with the likes of Gordon Ramsay and Matt Preston and has fallen on her face and broken her front teeth three times (but only fell in love with one dentist).

And that's just in real life.

On stage, Amanda Jane will grab you by the balls and politely hold your hand through an off-beat excursion of ridiculously naughty tales and oddly familiar tunes.

"I corrupt popular songs from the likes of Britney Spears, Kylie, Elton John and The Beatles and weave wild (but true) tales from my mentally disordered and colourful life," says Amanda Jane.

All her songs are drawn from her life pre and post Bipolar Diagnosis in 2015. "Bipolar diagnosis changed my life. Part of my journey of recovery and mental health has been about being honest and facing my fears. This show does all those things in the biggest and best possible way: it bares it all."

"I'm also really happy to be returning to the stage in Melbourne in line with World Bipolar Day on 30 March. I hope my show can raise a bit of awareness about what it means to be bipolar, and hopefully dispel some myths along the way."

$2 from every ticket sold on opening weekend (1-3 April) will be donated to Bipolar Australia.

Amanda Jane wrote, produced and performed in two critically acclaimed musical comedy plays in Melbourne (Swipe Left for Love and Two Bad Dates and Two Broken Noses) before booking a one-way ticket to Edinburgh Fringe in 2018, with $11,500 she won on The Chase Australia.

The prize money didn't last, but her career did. "I lived out of a suitcase for the best part of two years and performed all over the UK. It was the best way to hone my craft and become the performer I am today."