Every year in the wilds of Scandinavia, hundreds of bartenders converge on a snow castle to battle it out at the Finlandia International Vodka Cup. In an exclusive interview, Femail.com.au spoke to Aussie contestant, Mathew Hewitt about his experiences in the cold country.

2. How long have you been a bartender?
Seriously for about four years.

3. What attracted you to the industry?
It seemed like a good idea at the time (late nights, sleeping all day, tips, and of course being close to an old friend, Jack Daniels). Now it's making guests smile, after their first sip of an elixir made with passion... but still being close to old friends.

4. How long were you in Finland for?
I was in Helsinki for two days and in Lapland (Kittila) for four days.

5. What was your favourite thing about Finland?
The fact that half the country is one big nature reserve; fir trees, lakes and of course lots of snow. It's absolutely breathtaking - you can see why Santa Claus lives there!

6. What was the husky sledding like?
The sledding was very cool. The dogs were pure-bred Siberian huskies. When they were standing still they would howl and bark, but as soon as the sled would take off, all you could hear was the sled against the ice.

7. What was the competition like? Friendly or cut-throat?
It was a bit of both, considering that there were 22 bartenders from all over the globe representing their countries and we had to be decent to just get to the competition. In general most of us were relaxed and enjoying the trip, although after a few vodkas, the general conversation was about drinks and drinking.

8. Did you make any friends with other bartenders?
Yes, I hung out with Chris Harrop, the New Zealand bartender a fair bit, as well as the UK and American lads.

9. Was the Language barrier a problem?
As always, most people from Europe speak at least two or three languages, including English (which always makes me feel lazy that I only know one). The language wasn't a problem but then again, after a few vodkas....

10. Are your winning cocktails on sale at The Bowery?
Yes, we are a week away from the launch of our 4th list with two of my drinks on there, the aperitif and the dessert drink.

11. How do you come up with your cocktail recipes?
Hard question. I guess you have to decide what style of drink you want to make, e.g. aperitif, long, short, etc. Then decide who it's for and why. If it's for a competition, say the Finlandia Cup, you have to read the rules and know what's being judged. I always find simplicity works well - no more that five ingredients, use fresh ingredients wherever possible, and remember that the key to all great drinks is balance. It should take your palate on a long journey. Make the drink for mates that will give you constructive criticism and listen to their comments.

12. Why is Finlandia the best vodka in the world?
It comes down to taste, or in the case of vodka, the lack of taste. Finlandia's style is based around natural purity and uses glacial water, six row barley and state-of-the-art distillation techniques. Flavour elements known as congeners which are friends of brown spirits (whisky, bourbon, rye, etc.) are the enemy of vodkas in general. When I look at a spirit, I forget the marketing and to a degree the price. Pour the spirit with at least four others and do your own blind tasting. Everyone's palate is different, which is a good thing. WIth vodka I look for purity. It's about what makes a decent Martini and purity wins every time.

13. Will you be competing next year?
Definitely 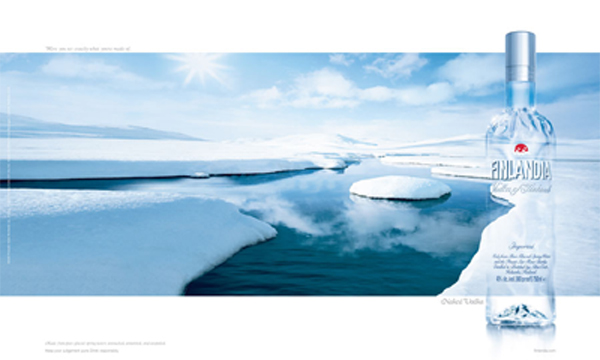