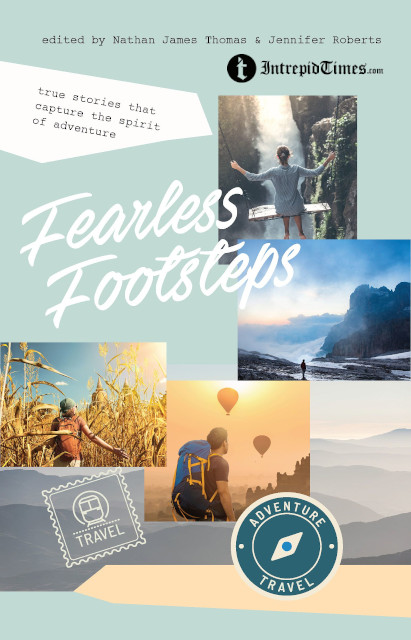 Travelling the world is an exhilarating, eye-opening, life-affirming experience. But it can also be scary to even think about. There are language barriers, borders to cross, planes to fly in, and of course, the mystery of an unknown land. It can be difficult to take the chance, even when you're yearning for adventure.

This inspirational collection of true travel stories proves that the best journeys are to be had when you feel the fear but go anyway. From a nervous flier anxiously taking to the skies for the first time to a female traveller braving the Middle East, from a death-defying hike on an Indonesian volcano to the anxious freedom of finding yourself alone on the other side of the world, these stories are certain to send you looking for your passport.

Created by the popular travel writing website, Intrepid Times, as part of an international writing competition that saw entries pouring in from across the globe, Fearless Footsteps is travel writing at both its most exhilarating and its most introspective. Covering every continent from Africa to Antarctica, these carefully selected stories get to the heart of what it means to be a traveller and see the world with courage, open-mindedness, and relentless curiosity.

Nathan James Thomas founded Intrepid Times in 2014, and it has since grown into a popular home for travel writing with heart, attracting hundreds of contributors and thousands of readers from around the world. His own travel writing has been published in places like Roads and Kingdoms, Outpost Magazine, and New Zealand Memories. Originally from New Zealand, Nathan lived in China for two years and is currently based in Eastern Europe.

Jennifer Roberts is a U.S. native whose adventures have stretched across four continents, from the valley of Chiang Mai to the heights of Machu Picchu. After developing a taste for travel on a high school trip to Italy, she left her small hometown in Illinois for an adventurous year in Thailand. She then moved to southern Chile, where she currently lives and works as a freelance editor, writer, and English teacher.