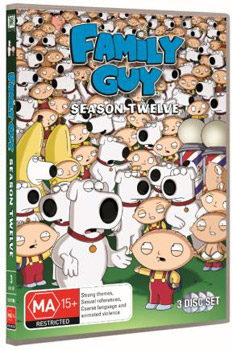 Go back to where it all began with Family Guy Season 12 on DVD from Twentieth Century Fox Home Entertainment. Featuring 23 all-new episodes, including scenes -too rude for TV' and over 3 hours of never-before-seen special features, Family Guy Season 12 promises hours of laughter featuring the most shocking, satirical and hilarious episodes to-date.

This season sees Peter endure another painful encounter with the angry Giant Chicken, Quagmire tries to get giggity with Meg, while Brian and Stewie travel back in time to the show's pilot episode.

Family Guy Season 12 is a side-splitting blast to the past packed with celebrity guest voices, including Cate Blanchett, Ricky Gervais, Ellen Page and Ryan Reynolds. As well as awesome bonus features, including a look back to the pilot episode with your favourite actors and Fishin' Around with hilariously clever guest star Ricky Gervais.