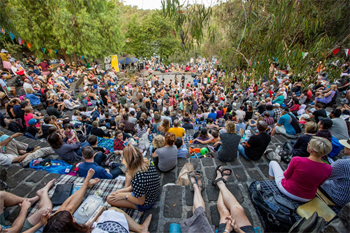 The 2017 edition of the Fairfield Summer Series brings an unmissable line-up to the Fairfield Amphitheatre for a series of free shows each Sunday in February from 5:00pm-7:30pm. Presented by Multicultural Arts Victoria in partnership with the City of Yarra, the 2017 edition features local talent from established and emerging artists. Enjoy tantalising international delicacies from the Social Studio; bring your friends, family and a picnic rug to witness some of Melbourne's best music and arts.

Sunday 5 February, 5pm-7.30pm
Fantastic Voyage
Be ready to be taken on a Fantastic Voyage through genre and tradition as we kick off the Fairfield Summer Series with an eclectic line-up headed by The Cactus Channel. Melbourne's flamenco rockers Malcura will get your heart racing whilst Kozmik County will supply Psychedelic Eastern music to make your feet slide and your mind expand. Top this off with unique and specialized dance stylings from Studio J and you're set on a journey beyond the leafy banks of the Yarra.

Sunday 12 February, 5pm-7.30pm
Station to Station
PBS 106.7 FM Stone Love presenter Richie 1250 will be taking punters from Station to Station of the African musical diaspora. Foreign Brothers' The COREtet will be laying down the funk and soul with moves from Metaphysical Groove. Alariiya is bringing the Afro-beat. Dig Deep will be showcasing local hip-hop talent. International stars from I LOVE DANCEHALL will show you how to shake.

Sunday 19 February , 5pm-7.30pm
Let's Dance
Chris Gill, the host of 3RRR's (102.7FM) Get Down, is hosting a dance party ripe for busting out some serious moves. Neil Morris is opening the show with a very special performance. Latin heroes, San Lazaro, will be there preceded by a Bindaas Salsa workshop for those not in the know. New-kids-on-the-Melbourne-Soul-Block, The Do Yo Thangs, are going to get you up and moving.

Sunday 26 February, 5pm-7.30pm
Changes
Celebrating the next wave of Melbourne's biggest talent Changes will be headed up by Billy Davis & The Good Lords. After a smashing year Thando will be showing audiences what she has been cooking up. See what's happening in Melbourne's poetry scene with spoken word fusion darlings Lay & Soreti: The Moment. As well as hosting the evening, Anna -Pocket Rocket' Lumb will be reveling in the renaissance of the Hula with an interactive performance.