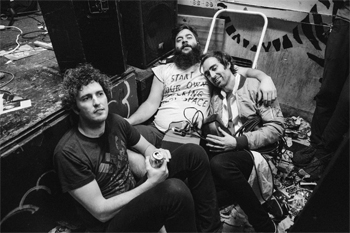 ACMI Cinemas is thrilled to announce the return of its scorching summer documentaries program, screening the best new films during the month of February. Audiences are invited to delve into a Williamsburg DIY music/art space in Goodnight Brooklyn: The Story of Death By Audio, discover the wonders of the internet with Werner Herzog in Lo and Behold: Reveries of the Connected World, and go behind the camera with renowned cinematographer Kirsten Johnson in Cameraperson.

Kicking off the program is Matt Conboy's sincere love letter to DIY culture and experimentation, Goodnight Brooklyn: The Story of Death By Audio. Screening from 11 February at ACMI Cinemas, the film captures the heart and soul of one of Brooklyn's most innovative venues, Death by Audio, a NYC haven for indie music and art lovers.

From humble beginnings as the manufacturing plant for bespoke guitar pedals Death By Audio, the warehouse gradually developed into a live music/art space, rolling out the welcome mat for bands, punters and even some residents (including the director of Goodnight Brooklyn) before it was forced to close.

Not content to go quietly into the night, Death by Audio enlisted many of the bands embodying the venue's DIY spirit - including Dan Deacon, Ty Segall, Deerhoof, Jeff the Brotherhood and Future Islands - to play a bunch of farewell shows, resulting in some knockout concert footage. More than 1800 shows after the venue first opened, Death by Audio would close its doors for the final time in 2015.

Screening at ACMI Cinemas from 15  February is Lo and Behold: Reveries of the Connected World, the latest film from prolific Oscar-nominated director Werner Herzog (Grizzly Man, Cave of Forgotten Dreams).

Premiering at the 2016 Sundance Film Festival, Lo and Behold combines Herzog's natural curiosity with his neophyte approach to technology to examine the past, present and future of the internet. As Herzog notes, 'Everything I learned while making this film was surprising to me. I came full of curiosity and awe and excitement, and the deeper I dug into it, the more puzzling and the more exciting it became."

Featuring candid conversations with some of the world's biggest names in online technology, including PayPal and Tesla co-founder Elon Musk, convicted hacker Kevin Mitnick, and internet protocol pioneer Bob Kahn, Lo and Behold reveals how the internet has completely revolutionised the way human beings live and interact with one another.

Capping off the summer documentaries program is Cameraperson. Screening at ACMI Cinemas from 23 February, the film is an intimate exploration of the 25-year career of award-winning documentary cinematographer, Kirsten Johnson (Fahrenheit 9/11 and Citizenfour).

Featuring footage from Johnson's global back catalogue, including filming across her native USA, Sudan, Rwanda, Colombia, Myanmar and Yemen, Cameraperson also focuses on the artist's family life. Part documentary and part autobiography, it provides a fascinating insight into the creative process and the challenges - both professional and personal - that come with a life spent behind the camera.

Also coming up in February: